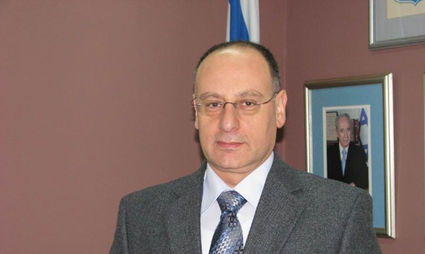 Dr. Masad Barhoum of Western Galilee Hospital: ‘It is Israel’s nature to help whoever can be helped.’

When Israeli doctors performed a CT scan on Abdulrazak, an 8-year-old Muslim boy from Ethiopia who was almost mauled to death by a wild hyena, they were surprised to find the rabid animal—that caused severe head, scalp and eye injuries to the young victim—had also taken a piece of his jaw bone.

Abdulrazak and his father at the Western Galilee Hospital in Israel.

So, doctors at the government-run Western Galilee Hospital in Nahariya added a bone graft operation to the list of planned life-saving surgeries already set up.

“We’re trying to perform all the surgeries we can. We’re saving his life and we’re taking him out of danger,” Dr. Masad Barhoum, director-general of the Nahariya hospital, tells ISRAEL21c. “What the hyena did was catastrophic.”

Abdulrazak is in Israel on a lifesaving cross-border humanitarian mission. His journey from a remote Ethiopian village called Enemur to Israel’s northern coastal city is one of bad luck, good luck and a lot of goodwill.