Canada will stand by Israel 'through fire and water' 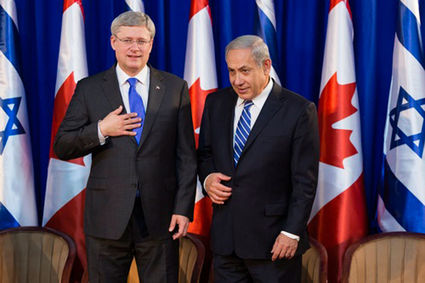 Israeli Prime Minister Benjamin Netanyahu (right) with Canadian Prime Minister Stephen Harper during a welcoming ceremony for Harper at Netanyahu's office in Jerusalem on Jan.19, 2014. Harper took a four-day trip to Israel and the Palestinian territories.

Harper, who is making his first-ever trip to Israel, arrived on Sunday at Tel Aviv's Ben-Gurion Airport to a lavish ceremony. Israeli Prime Minister Benjamin Netanyahu praised Harper's courage and said he is a "great friend of Israel and the Jewish people."

In his speech to the Knesset, Harper explained why it is important that Canada stand with Israel.

"Canada supports Israel because it is right to do so. This is a very Canadian trait, to do something for no reason other than it is right even when no immediate reward for, or threat to, ourselves is evident," said Harper.

"Support today for the Jewish state of Israel is more than a moral imperative. It is also of strategic importance, also a matter of our own long-term interest," he said.

Harper criticized world leaders who single out Israel because it is the popular thing to do.

"It is all too easy 'to go along to get along' and single out Israel," Harper said.

"This is really something we have not seen before, a prime minister of Canada taking a really strong position at a great political cost. He knows that this could really hurt him in some areas, but he doesn't care, because this is what he really believes," Rabbi Philip Scheim of Toronto's Beth David Synagogue, part of Harper's delegation to Israel, told JNS.org.