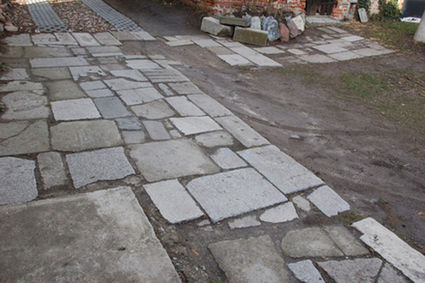 Jewish gravestones were used to pave roads in Poland.

Polish-born American historian Jan T. Gross revealed new historical research about Polish-Jewish relations while speaking to a full house at the Bryan Glazer Family JCC in Tampa. Gross' research claims that Poles killed more Jews than Germans during World War II and his historical book "Neighbors: The Destruction of the Jewish Community in Jedwabne, Poland" has become very controversial. Currently, the Polish government is accusing Gross of "publicly insulting a nation" and threatening to prosecute him for his claims. If convicted, Gross faces up to three years in prison. According to Gross' research into the 1941 Jedwabne pogrom, Polish gentiles had murdered hundreds of Jewish residents of Jedwabne, contrary to the official history which held the Nazi occupying force accountable. In his research, Gross, a renowned Holocaust scholar and professor at Princeton University, pieces together eyewitness accounts as well as physical evidence into a comprehensive reconstruction of the horrific July day remembered well by locals but hidden to history.

Following Gross' lecture was the showing of the powerful film "Aftermath," a 2012 Polish film inspired by Professor Gross' "Neighbors." Aftermath is about a Polish man who returns home after the death of his father and unearths a secret about the now-deceased Jewish residents of his village. This inspiration for the film was the controversy in Poland surrounding the publication of Gross' "Neighbors." A vital component of the plot seen in "Aftermath" depicts the discovery of Jewish gravestones (matzevot) that had been used by German-occupying forces as paving stones in place of ordinary stone. The matzevot are now parts of fences, pavements, and grindstones. Even today, the matzevot continue to be utilized in cases where ordinary stone, of which there is no shortage, could be used.

On display now at The Florida Holocaust Museum is the exhibition Matzevot for Everyday Use, which features photographs taken in Poland by Polish photographer Łukasz Baksik to document the ways in which Jewish gravestones have been stolen and re-appropriated.