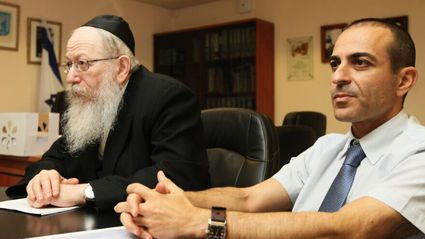 Many thousands of Jews visit the grave of Rabbi Nachman of Breslov every year around Rosh Hashanah. In his letter to the Ukrainian leader, Gamzu warned of the massive spread of the virus that could be caused by allowing such a pilgrimage to take place this year.

"I apologize that I did not inform the prime minister and health minister about the letter to Ukraine," Gamzu told Israeli public broadcaster Kan during a radio interview.

Ukrainian Prime Minister Denys Shmyhal said on Wednesday that his country would ban the entry of foreigners through the end of September, and that such mass events as the Uman pilgrimage would have to be prohibited.

Gamzu's letter was believed to have played a major role in convincing Kiev to announce the ban, according to Kan. A final Ukrainian decision ratifying the move is expected on Thursday, said the Israeli public broadcaster.

Gamzu had been criticized by Israeli Housing Minister Yaakov Litzman of the United Torah Judaism Party, who until recently served as health minister, for breaking protocol as a civil servant by contacting a foreign political leader.

Israeli Prime Minister Benjamin Netanyahu's office issued a statement on Wednesday supporting Gamzu and calling on all parties to cooperate with him.

"Prime Minister Benjamin Netanyahu, who appointed Professor Ronni Gamzu as national coronavirus project manager and holds his dedicated work in great esteem, works and cooperates with him on a daily basis and calls on everyone to do likewise," said the statement.

Despite his apology, Gamzu charged during the interview on Thursday that "here and there" the Israeli government was allowing political considerations to override health concerns with regard to the fight against COVID-19.