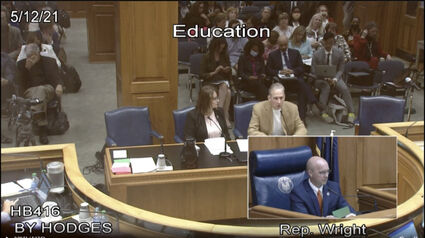 Louisiana state Rep. Valarie Hodges sits with author David Barton during a May debate on a bill of Hodges' that would have mandated Holocaust education in the state.

(JTA) - At first, Danny Mintz was excited to learn that lawmakers in his state, Louisiana, were considering mandating Holocaust education in public schools.

A director at a good-government group called the Louisiana Budget Project, Mintz knew that the local Jewish federation was encouraging his synagogue's board to back the bill. In a state where a notorious Holocaust denier, David Duke, had been the Republican candidate for governor in 1991, clearly there was a need for more Holocaust education.

But Mintz had second thoughts once he began learning more about the content and the backers of...