A Purim directive: Laugh it up! 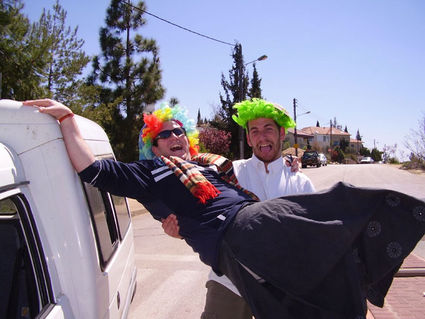 NEW YORK (JTA)—Little kids will laugh at anything. The simplest knock-knock joke or a tickle fest—even the threat of one—can so easily end in hysterics. They laugh because they are surprised by something unexpected in a world they are constantly discovering.

If only that kind of laughter came as easily as we got older.

While the laughter of childhood is characterized by the element of surprise, the laughter in adulthood becomes a way of managing stress (filmmakers know this well and skillfully employ any element of comic relief during an action thriller to release some of the tension). Laughter becomes a coping mechanism to get us through difficult times. Paradoxically, many of us are so loaded down with responsibility and worry that we don’t indulge often enough in this emotional and physical release.

Purim is a holiday that isn’t ripe with laws and ritual obligations save for reading the Megillah, giving mishloach manot (gift packages) to friends, matanot l’evyonim (gifts to the poor) and having a festive meal. However, there is one directive for observance that is very clear: “they (The Jews) should make [Adar 14 and 15] days of feasting and joy …” (Scroll of Esther 9:22).

We each might experience this commandment on a different level. For 5-year-olds, putting on funny costumes, enjoying bobbing for candied apples at the synagogue carnival and seeing the rabbi dressed as a superhero evokes one kind of joy. For most grown-ups, joy and laughter may be an expression of a different kind. While we appreciate the dark comedy of the Megillah, our laughter also is a collective sigh of relief in having averted near annihilation unscathed.

The storyline of Purim, which this year falls on the evening of Feb. 23, is a dramatic comedy of errors and grand gestures with over-the-top reactions. It is so different in content and style than nearly every other book of the Bible that scholars speculate about the veracity of the story altogether. Drunken parties, political posturing and sexual innuendos weave their way throughout the narrative.

The Megillah begins with a raucous party hosted by King Achashveros, who demands that his wife, Vashti, appears (only! as commentators point out) in her crown. After refusing to appear naked, she is told to never appear before the king again. After his “wise” counselors offer advice, an edict is sent out across the provinces demanding that all wives respect their husbands’ every demand. Not sure what all the wives had to say about that!

It is a story about reversals. The Megillah has Mordechai, the Jewish hero who refuses to bow down to Haman. The act of disobedience ignites the ire of Haman, the recently promoted chief adviser to the king. Haman, in turn, calls for the destruction of all Jewish people.

Esther, who until this point has hidden her identity, then reveals that she also is a member of the doomed people and calls on Achashveros to punish Haman. Achashveros does by bestowing all the raiments and honors that were reserved for Haman to Mordechai. Further, the very gallows that Haman had ordered to be built for the hanging of Mordechai are the ones on which Haman meets his end.

Purim is a story of incongruencies. A people once despised and on the verge of destruction are told that they can defend themselves thanks to Esther’s petitions to the king and suddenly become a force with which to be reckoned. For pragmatic reasons, the text indicates that, “many of the people of the land became Jews; for the fear of the Jews fell upon them.”  Averted disaster becomes an unusual catalyst for conversion.

While grand gestures, plot reversals and a storyline that doesn’t mesh quite right are elements that are employed by comedy writers and will evoke laughter, our general state of reverie on Purim is born from what the philosopher John Morreall observes about the evolution of laughter. Morreall believes that human laughter became a gesture of shared relief that a dangerous situation had passed. Laughter puts us into a state of relaxation and can build bonds between us.

As the cultural anthropologist Mahadev Apte observes further, “Laughter occurs when people are comfortable with one another, when they feel open and free. And the more laughter [there is], the more bonding [occurs] within the group.”

Jews have always used humor as a coping mechanism for Jewish survival and as a common reference point to connect to other Jews. Jewish comedians knew this well. As a people who have been oppressed for so long, we have always appreciated laughing at our situation before others could.

So this Purim, hold the childlike laughter of discovering new things (maybe someone you didn’t expect will give you mishloach manot; maybe you will surprise yourself at your generosity when you give a gift to the poor) and appreciate the narrative of the Purim story itself. But most important, experience the joy that comes from release, knowing that the Jewish people not only survives but continues to thrive.

As you raise your glass at Purim, toast “l’chaim”—to life—and to a life filled with deep laughter.