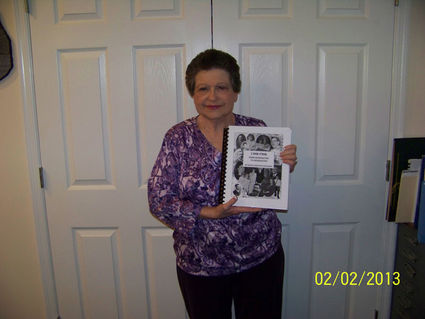 After 13 years of research and writing her family history book, “La dor v’dor From Generation to Generation,” Edith Lefkovits Schulman, a former associate edidtor at the Heritage Florida Jewish News, is finally finished—though not complete.

There are endless ways to write a history of your family, Schulman explained. She chose to tell the story of her four grandparents, and in doing so, related the stories of her ancestors and the relatives who came after them, why and when they came to America, why they chose to leave the known for an unknown life ahead. So much courage our ancestors had!

Today many genealogists choose to get most of their information from the Internet. Schulman, on the other hand, found the most exciting way was to go to a cemetery, synagogue archives, courthouse, Metro Archives, the Nashville Public Library, which kept the morgue of the Nashville newspapers, and the place where school records were kept. Imagine that Schulman could look at her father’s school records 90 years after he went to school. And, finally, she went to the Tennessee State Library and Archives and to dig out the census and immigration records she wanted to find. “I was lucky,” said Schulman, “a great deal of the information that I wanted was in the repositories in Nashville, Tenn., where two of my grandparents were born.”

Schulman did use her computer for some help. “I never realized the number of sites there were online to aid the genealogist—some free, some not free. It’s there, to be found with will and determination.”

Along the way, Schulman found many interesting bits of information. For instance, she found from records that three generations of her family had been married from the same temple: Charles and Edith Schulman, her parents Sylvan Lefkovits and Janet Solomon, and her grandparents, Ike Lefkovits and Augustus Bissinger.

In June 2003, the Schulmans took two of their grandsons to Nashville, to show them where their grandparents had grown up. “We visited the cemetery. Not much fun for kids, usually, but before we left Florida, I made each boy a family tree with birth and death dates on it. At the cemetery, I showed the boys about where they might find their ancestors, gave them stones and set them loose. What a wonderful adventure they had,” reported Schulman. “They even caught me in an error.”

High on her list was to show the boys the house where their grandmother had grown up. Fortunately, the house had been bought by a lovely young couple. The owner invited them in to look around. Schulman happened to mention that she was trying to write her family’s history, but had no early pictures or records. The owner mentioned they planned to add on to the house that summer. As people will do, they exchanged phone numbers and email addresses.

Two month later, the owner of Schulman’s old house called her. She said when the contractor tore down the back wall he found a hidden dresser in the wall full of pictures, letters, scrapbooks and all kind of records. The name on them was something like “Lefwich.”

“They’re mine,” Schulman told her.

Her first impulse was to jump in the car and drive through the night to Nashville, but cooler heads prevailed. The house owner mailed “the stuff” to Schulman—27 pounds in all.

Wonderful things were in the package, Schulman said. Now Schulman had early pictures, letters (some unopened for 60 years or more), and records to fill in gaps about her family. Her project could move forward.

She included with each family (there are four) a family tree, a detailed index, pictures, description of the family and from where they came in Europe, chapter notes and a time line. One of the most important items included was a chart on causes of death, when known. This is so important for the generations that follow. Generations are distinguished by numbered subscripts.

Thirteen years after Schulman began this project, she put down her pen. The history, pictures and documents are left for her children and grandchildren, with the hope that someday, they may want to add even more to the book.