Boy on 'Girls' is also a 'restless' filmmaker 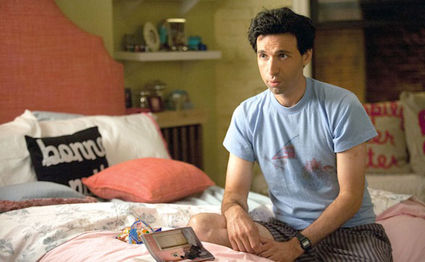 You might only know Alex Karpovsky as Ray Ploshansky, the caustic barista who fitfully romances the naïf Shoshanna on HBO’s zeitgeist-y hit, “Girls.”

But while shooting that show, Karpovsky also has managed to write, direct and star in two independent films that recently premiered at Lincoln Center in New York: “Red Flag,” a meta-comedy in which he plays a self-absorbed independent filmmaker named, well, Alex Karpovsky; and “Rubberneck,” a psychological thriller about a scientist who becomes dangerously obsessed with a co-worker.

And in December, Karpovsky will appear as a hopeless square (and wannabe bohemian) in the Coen brothers’ “Inside Llewyn Davis,” a folk music saga set in 1961.

Why so busy? “I just have a restless drive to keep working,” said Karpovsky, who begins shooting the third season of “Girls” this month. He does see a thread connecting the roles, however.

“I’m drawn to characters who are lonely, neurotic and on journeys of self-discovery,” he said. “Many of them want to become better people, but the road is often tortuous.”

Speaking by phone from the apartment he sublets in Brooklyn, Karpovsky, 33, frankly discussed his own neuroses, which he sometimes draws upon to create his characters. “I have an acute death anxiety,” he said. “ I think about death all the time. It’s the root fear that creates a lot of my day-to-day insecurities.”

Like his character in “Red Flag,” Karpovsky was once dumped by a girlfriend who was fed up by his refusal to propose. “The character feels that if he gets married, his drive and ambition will stagnate, which he sees as a form of death,” Karpovsky said. The actor also has had issues with that kind of commitmentphobia, which, he said, has even extended beyond relationships to housing arrangements. Karpovsky said because of this he tends to sublet apartments, sometimes for short periods of time, and to date has never signed a lease.

“I’m hoping to get a place in April, but it’s hard because I don’t have any credit,” he said. No matter that Karpovsky is among the stars of one of the most talked-about shows on television. “Most of the landlords in my area are Eastern Europeans, and they don’t watch HBO, never mind ‘Girls,’ ” he said.

The fictional Ray’s living situation is even more tenuous: On a recent episode of the show created by its lead actress, Lena Dunham, Ray admitted that he has essentially moved in with Shoshanna because he is homeless and living out of his Mitsubishi.

“I love the fact that all the characters are very authentic, and the relationships are grounded in naturalism,” Karpovsky said. “Viewers are much more familiar with comedies expressed in broader tones, with beautiful people, but we’re doing something much more raw, and, hopefully, reflective of the world we see around us in Brooklyn every day.”

Karpovsky grew up in Boston, the son of a computer science professor, where the décor in his childhood home included paintings of shtetls and other images of Jewish life in the Pale of Settlement. His parents are Russian Jews who emmigrated from the former Soviet Union in the late 1970s: “They had endured anti-Semitism and the many limits and quotas the Soviets placed on Jews,” Karpovsky said. “They left to create a better life for themselves, and also for me.”

While in his 20s, Karpovsky assumed he would follow his father’s footsteps into academia, but he left his doctoral program in visual ethnography at Oxford University when he discovered his penchant for the theater. Back in the United States, he began making his own movies while working at a film editing company, where he was allowed to borrow the in-house equipment to work on his own projects.

It was while screening his third movie, “Trust Us, This Is All Made Up,” at the South by Southwest film festival several years ago that Karpovsky met Dunham, who promptly cast him as a self-centered beau in her acclaimed, low-budget 2010 film “Tiny Furniture.”

When Dunham hired Karpovsky to play Ray in “Girls” the following year, the actor immediately grasped what she wanted from the character: “Ray is a contrarian who speaks his mind and calls out the other characters on their b.s.,” he said. “He’s 33, a bit older than everyone else, and he feels this strange obligation to blurt out his perspective on what others are doing, even if it is misguided and occasionally perverse.”

This season has revealed that Ray’s cynicism “actually comes from a sad, lonely place,” Karpovsky said; viewers have learned that Ray is an orphan, with plenty of abandonment issues.

They’ve also learned that Ray isn’t Jewish: “In a recent episode, someone calls Ray a kike, and he responds by saying that he’s actually Greek Orthodox,” Karposvky said. “That was a surprise for me as an actor, and from I’ve read on Twitter, it was also a surprise to some members of the viewing public as well.”

What’s it like for Karpovsky to be a boy on “Girls”? “I feel like a voyeur at times, when I’m hearing three or four of the female characters talk to each other on the show,” he said.

“Every man has the secret desire to overhear the conversations of women, and to know what they’re really thinking—and that’s incredibly juicy, delicious information to get a hold of.”

“Girls” will air the final episode of its second season on Sunday, March 17.

Naomi Pfefferman is the arts & entertainment editor at The Jewish Journal of Greater Los Angeles.