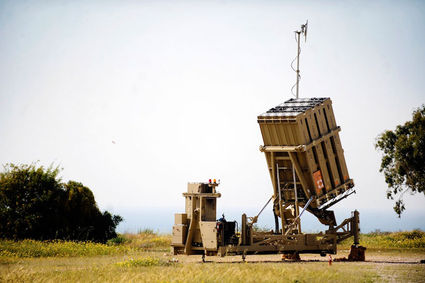 The Iron Dome battery in Ashkelon.

“I’m realistic, so I’m not putting all the eggs in one system, [even though] it had much success,” IDF Brig. Gen. Dr. Danny Gold, who had the initial idea for the Iron Dome, said in an interview with JNS.org at the 2013 American Israel Public Affairs Committee (AIPAC) conference. “I did my job, I developed many other systems. So [the Iron Dome] helped Israel to probably prevent a massive ground operation and war, but it’s not alone.”

Gold was referring to other joint U.S.-Israel missile interception systems such as the David’s Sling (still in development), Arrow 2 (operational) and Arrow 3 (still in development). Asked by an audience member during an AIPAC breakout session to compare and contrast David’s Sling to Iron Dome, Gold explained that the concept of protecting Israel comes in “layers”—with David’s Sling providing the second layer (after the first layer of Iron Dome) to protect against long-range rockets and cruise missiles.

Arrow 3, considered to be the most innovative and revolutionary anti-missile system in the world, was successfully tested in central Israel on Feb. 25. The system is meant to bolster Israel’s ability to intercept long-range ballistic missiles, and is designed to intercept such missiles outside the Earth’s atmosphere in space.

The Iron Dome’s success—and the $275 million that the U.S. has contributed so far to the system—made it a natural source of pride for both American and Israeli officials at the AIPAC conference. Outgoing Israeli Defense Minister Ehud Barak said at a plenary session last Sunday that the system is “like hitting a bullet with another bullet.”

At last Monday morning’s AIPAC plenary, U.S. Vice President Joe Biden recalled a time when he needed to explain to audiences what Iron Dome was, how it works, and why the U.S. should fund it. That is no longer the case following Operation Pillar of Defense, according to Biden.

“The world saw firsthand why it was and remains so critical,” Biden said of the Iron Dome. “For too long, when those sirens blared in the streets of the [Israeli] cities bordering Gaza, the only defense had been a bomb shelter. But late last year Iron Dome made a difference.”

Asked how the Iron Dome’s results so far have compared with his expectations of the system, the IDF’s Gold said, “I am very content of course, I strive for the top, 100 percent, but it is very good, it is a breakthrough.”

“We are working on the second generation and the third generation, against other scenarios, more sophisticated threats, and we will update the system all the time,” he told JNS.org.

November’s Israel-Gaza conflict saw Palestinian rockets land in the vicinity of the large cities of Tel Aviv and Jerusalem, rather than being limited to southern Israel. It marked the first time a rocket alarm was sounded in Tel Aviv since the Gulf War in the early 1990s, and the first time such an alarm was ever sounded in Jerusalem.

As a result, the fifth Iron Dome battery was installed near Tel Aviv ahead of schedule. How will the system continue to protect Israelis if more powerful Palestinian rockets, such as the Iranian-developed Fajr-5, continue to penetrate deeper into the Jewish state?

“You just put a battery there, and it is ok,” Gold said.

Gold told the AIPAC breakout session that the Iron Dome is a positive development for both sides of the Arab-Israeli conflict.

“You’re not just saving Israeli life, you save also Hamas life and Syria’s life because there is no more war [as a result of the system],” Gold said.

But during wartime, the Iron Dome has no margin for error, U.S. Rep. Eric Cantor (R-VA) said at last Monday night’s AIPAC plenary.

“Make no mistake. The Iron Dome has to be right 100 percent of the time, or Israelis die,” Cantor said.