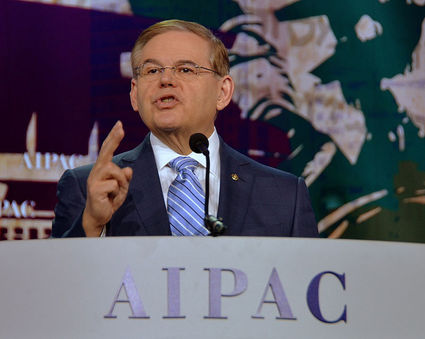 Menendez, the new chair of the Senate Foreign Relations Committee, follows current Secretary of State John Kerry and Vice President Joe Biden in that post. “There will never be any daylight between the United States and Israel on my watch,” he told the AIPAC crowd. “Never. Not on my watch.”

JNS.org spoke privately with Menendez in the halls of the Washington Convention Center following his address. The senator said he hopes that the upcoming trip of President Barack Obama to Israel, coupled with Kerry’s diplomatic efforts in the Middle East, “can reignite an effort where we can get the Palestinians back to the negotiating table with Israel, which is the only way in which we will have peace.”

“It has to be a negotiated [peace settlement]—you can’t do it at the United Nations,” Menendez told JNS.org, referring to the Palestinians’ unilateral statehood bids at the UN the last two years. “You have to do it between the two parties. Israel has expressed its willingness to negotiate without preconditions.”

Asked by JNS.org if he sees anyone else capable of leading the PA should Abbas leave or lose that role one day, Menendez responded, “I don’t think it’s really for the United States to look towards whom the Palestinian Authority and its people choose as its leader. We stand ready to work with anyone who is willing to follow the path to peace, who is willing to enter into a negotiated settlement with the government of Israel, and to seek to live side by side peacefully and fulfill the hopes and dreams and aspirations of their people. Whoever that is, we look forward to working with him. Right now, that’s President Abbas, and that’s with whom we work.”

JNS.org asked Menendez if his public support for the Jewish community and for Israel in any way has conflicted with his work in diverse New Jersey communities such as Paterson, a city that is home to the second-largest Muslim population in the U.S. as well as a mosque, the Islamic Center of Passaic County, whose leader, Mohammad Qatanani, is allegedly a member of Hamas.

The Senator responded by expressing his admiration for the “incredibly hard working people” of New Jersey’s Muslim community.

“They have helped rebuild some of our oldest communities,” Menendez said. “They have a strong faith and family focus. My experience has been that they are making contributions in those communities in New Jersey in which they reside.”

Menendez, in partnership with U.S. Sen. Lindsey Graham (R-SC), has co-authored a new resolution that calls on the U.S. to “stand with Israel and provide diplomatic, military, and economic support to the government of Israel in defense of its territory, people, and existence.” The resolution is expected to pass in the House and Senate.

Soon after submission of the Graham-Menendez resolution, U.S. Reps. Ileana Ros-Lehtinen (R-FL) and Ted Deutch (D-FL) put forth a bill that would create a unique, legally acknowledged designation of Israel as a “major strategic ally” for the U.S.

Delegates at AIPAC’s 2013 Policy Conference, preparing to go to Capitol Hill to lobby their House Representatives and Senators following the end of the conference on March 5, were invigorated by the words of Menendez, the three-day conference’s final notable speaker. The newly appointed Senate foreign relations chair was making his first major public appearance after returning from a trip to Afghanistan and Pakistan.

Menendez told the crowd, including the 500-member delegation from New Jersey that he acknowledged, that America would “protect and defend our fundamental promise to stand with Israel and the Israeli people in a strong and lasting alliance.” He called the Jewish state “an enlightened society,” promising the availability of America’s “military strength where necessary.”

U.S. aid to Egypt should be contingent upon Egypt upholding its 1979 peace treaty with Israel, Menendez said.

“American security assistance to Egypt cannot be a blank check,” he said.

Drawing a standing ovation from the AIPAC crowd, Menendez affirmed the biblical Jewish connection to the land of Israel.

“There can be no denying the Jewish people’s legitimate right to live in peace and security in a homeland to which they have a connection for thousands of years,” he said.

As far as the Iranian nuclear threat goes, Menendez said, “Containment is not an option for the United States.”

“Our clear intention must be to prevent Iran from ever reaching nuclear capacity,” he said.

“We will not and cannot talk for talking’s sake,” Menendez said of the diplomacy track for Iran. “We cannot allow the negotiations to become just a stalling tactic for Iran to buy time.”