New haggadahs: Bronfman's and an interactive version for kids 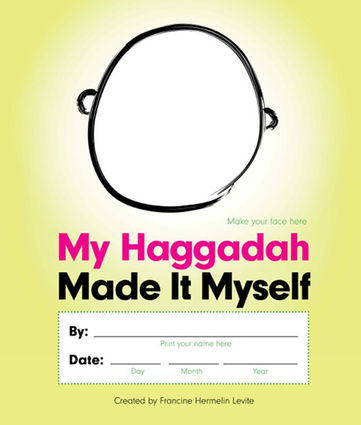 Made it Myself Books

Francine Hermelin Levite was motivated in part to create ‘My Haggadah: Made it Myself’ by the food allergies of her son.

BOSTON (JTA)—Francine Hermelin Levite and Edgar Bronfman have been using unique versions of the Passover Haggadah for years. Now both have decided to publish their versions of the Exodus story.

Hermelin Levite, 43, the mother of three school-aged children, is the author of “My Haggadah: Made it Myself,” (http://madeitmyselfbooks.com), an interactive version for children of the ritual-laden book that is now available on Amazon.

Bronfman, 84, the business giant and Jewish philanthropist, offers “The Bronfman Haggadah” (Rizzoli) illustrated by his wife, the artist Jan Aronson.

Hermelin Levite’s journey to publishing a Haggadah began about eight or nine years ago when she joined some unaffiliated young Jewish families living in lower Manhattan who were banding to create a Passover celebration. Growing up in Detroit, Hermelin Levite says she enjoyed lively and inspirational seders led by her father, who followed the traditional haggadah embellished by music he composed and other innovations. But she knew it was not a universal experience.

Hermelin Levite, a one-time journalist, educational software developer and graphic designer, volunteered to compile the haggadah. She said it had to resonate with kids and families of multiple backgrounds.

She also was motivated by the needs of her young son, who has severe food allergies to nuts, chicken and wheat.

“He was allergic to the food of Passover,” she recalls thinking and vowed to create a seder in which he could participate.

“The book is designed to invite artistic expression ranging from simple stickers to more complex collage and discussion,” she said, adding that her husband, also a graphic designer, helped with the images.

Over the years, her do-it-yourself, hands-on haggadah has become popular through word of mouth. Last year she decided to self publish and was amazed with the number of orders from far-flung locales such as Budapest and Hong Kong.

This year, with a grant from Reboot, a nonprofit that supports innovative projects to engage young, unaffiliated Jews, Hermelin Levite is traveling across the country introducing the haggadah to new audiences. The spiral-bound haggadah will appeal to kids with all levels of knowledge of Jewish observance.

To illustrate the passage of the four children—the wise, wicked, simple and silent—the haggadah offers four blank faces in which kids are asked to draw the personalities of guests at their seder. Blessings are written in Hebrew with English transliteration.

In retelling the Exodus story, children are presented with an empty suitcase and asked to think about what they would take if they had to leave in a hurry. Hermelin Levite hopes the provocative questions spark conversation.

She credits her Jewish education and a family that fostered a love of Jewish experience with the inspiration for creating the haggadah.

“I used to think I was an accidental children’s book author,” Hermelin Levite wrote to JTA in an email. “But given my upbringing, professional path and journey raising my kids, [writing the haggadah] seems to make the perfect sense.”

Bronfman, too, has fond memories of his childhood seders as joyful gatherings of family, but says they were uninteresting, uninformative and rote. Over his lifetime, dissatisfied with the available haggadahs, he has cut and pasted passages from various versions to create more engaging seders in his own home. A few years ago he decided to create his own haggadah.

“I wanted to get all the words right,” he said.

The popularity of Passover offers a unique opportunity, he tells JTA.

“We have a chance to teach young people what Judaism is about,” Bronfman said.

Children’s author Eric Kimmel, the author of “Wonders and Miracles,” a Passover companion filled with art that in 2004 won a National Jewish Book award, applauds that spirit.

“If the traditional version doesn’t work for you, come up with something else,” he advocates, with a nod to the tradition but also with a dose of disrespect, he adds with a laugh. “What’s important is to follow the biblical injunction to tell your children the story of Passover.”

“The Bronfman Haggadah”  (www.rizzoliusa.com/book.php?isbn=9780847839681) is written entirely in English—Bronfman quips it’s to appeal to most American Jews, who do not know Hebrew. The reading takes about an hour-and-a-half. Unlike the traditional haggadah, Bronfman includes Moses, who he holds as a role model of a leader who asks questions and disrupts the status quo. But all the characters of the Exodus, including God, are represented as metaphor and not historical facts, he writes.

Welcoming Elijah the prophet earlier in the seder underscores the Jewish value of welcoming in strangers, Bronfman says.

New words to the popular song “Dayenu” express gratitude for establishing a homeland in Israel. Bronfman ends the seder with a call for spiritual peace in Jerusalem among Israelis and Palestinians, Jews and Arabs, and all warring peoples.

Notably, Bronfman expands the narrative of the traditional haggadah to include the giving of the Ten Commandments at Mount Sinai. While the foundation of Jewish law is the theme of Shavuot, he acknowledges that most Jews are unaware of the holiday that follows Passover. 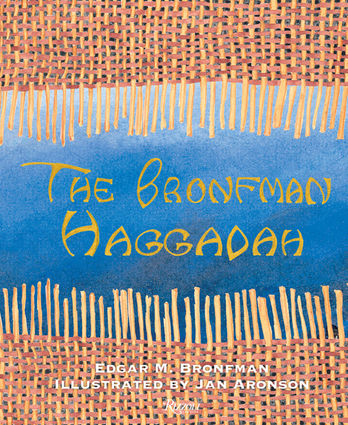 In creating his haggadah, Edgar Bronfman says the popularity of Passover offers a unique opportunity to teach young people what Judaism is about.

“Freedom doesn’t mean anything without the responsibility of law,” Bronfman tells JTA. “To be free is a privilege we too often take for granted.”

Arsonson, who has fond memories of Passover seders growing up in New Orleans, spent nearly a year working on the illustrations for the “Bronfman Haggadah,” determined to avoid cliched images. To keep the images fresh—and to entertain youngsters—she changes up the artistic styles from one page to another—some are realistic, others abstract or geometric—and also varies the mood and colors. A biblical map of the Exodus depicts the possible routes traveled by the Israelites.

For the Ten Plagues, Aronson draws a large singing insect that will capture the attention of children. Miriam’s tambourine is vibrantly colored with long flowing ribbons that complement the joy described in the narrative as the Israelites escape bondage.