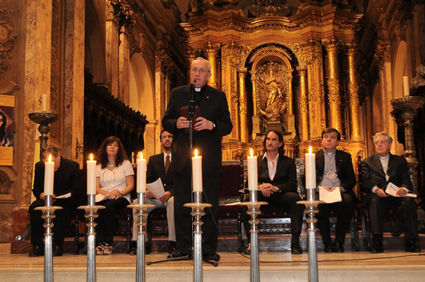 ROME (JTA)—When the white smoke rose last week at the Vatican, signaling to the world that the College of Cardinals had chosen a new pope, Catholics weren’t the only ones waiting with bated breath.

Jews, too, were eager to see whether the new pontiff would be someone familiar with their concerns.

Would he be a non-European unfamiliar with the Jewish people and the weighty legacy of the Holocaust? Would he carry on the legacy of his immediate predecessors and work to further Jewish-Catholic relations?

After the new pope appeared before the masses in St. Peter’s Square, it didn’t take long for him to signal that he would maintain the church’s outreach to Jews. Nor did it take long for the Jews to sing his praises.

The new pontiff “is no stranger to us,” World Jewish Congress President Ronald Lauder, who met with Bergoglio in Buenos Aires in 2008, said in a statement. “He always had an open ear for our concerns.

“By choosing such an experienced man, someone who is known for his open-mindedness, the cardinals have sent an important signal to the world,” Lauder said. “I am sure that Pope Francis will continue to be a man of dialogue, a man who is able to build bridges with other faiths.”

Like Benedict before him, Francis in one of his first official acts wrote to Rome’s chief rabbi, Riccardo Di Segni. He invited Di Segni to the papal inaugural Mass and said he hoped “to be able to contribute to the progress that relations between Jews and Catholics have experienced” since the Second Vatican Council in the 1960s.

The election of Francis, Di Segni wrote back, “gives us the hope that the path of friendship, respect and productive collaboration will continue.”

On Saturday, the pope went out of his way to acknowledge non-Catholics in a blessing offered to news media.

“Given that many of you do not belong to the Catholic Church and others are not believers, I give this blessing from my heart, in silence, to each one of you, respecting the conscience of each one of you, but knowing that each one of you is a child of God,” Francis said in his address, according to The New York Times. “May God bless you.”

Pope John Paul II had made outreach to Jews one of the pillars of his papacy. His successor, Benedict XVI, continued dialogue with the Jews but also made several policy decisions that angered Jews, including lifting the excommunication of a renegade bishop who turned out to be a Holocaust denier.

Francis projects a “man of the people” style in sharp contrast to Benedict, who was seen as removed and cold. Francis is known for living simply, taking the subway and answering his own phone. He spent virtually his entire career in Argentina, away from the intrigues of the Vatican’s Roman Curia—the central governing body of the Catholic Church—and other scandals that dogged the papacy of his predecessor.

However, within days of the new pope’s election, the Vatican faced questions about what Francis did—and did not do—to oppose the military junta that ruled Argentina from 1976 to 1983. Critics have said the church did not do enough to oppose the military dictatorship’s Dirty War, including the kidnapping of two Jesuit priests in 1976. Francis has said he worked behind the scenes to free the priests and sheltered others by hiding them at a Jesuit school.

The questions about Francis’ past carry echoes of the Holocaust-era controversy surrounding Pope Pius XII. Many Jews charge that Pius did not do enough to oppose the Nazis, but the Vatican and Pius’ proponents say he worked behind the scenes to save Jews.

While a staunch conservative on social issues such as gay marriage, female priests and abortion, Francis spent years working among the poor and made interfaith outreach one of his priorities.

“The Latin American Jewish Congress has had a close relationship with Monsignor Jorge Bergoglio for many years,” said Claudio Epelman, executive director of the congress. “We know his virtues and have no doubt whatsoever that he will do an excellent job for the church.”

As archbishop of Buenos Aires, his relationship with Argentinian Jews was personal as well as institutional.

His only book, “Regarding Heaven and Earth,” is the transcript of wide-ranging conversations between himself and Rabbi Abraham Skorka, the rector of the Latin American Rabbinical Seminary. Francis and the rabbi also shared billing on an Argentinian TV talk show on religious issues.

Francis has referred to Skorka as his “brother and friend.” The then-cardinal attended services at Skorka’s synagogue and also arranged for Skorka to receive an honorary doctorate from the Catholic University of Argentina.

Francis also wrote the foreword to a book by another Buenos Aires rabbi and civic activist, Sergio Bergman.

“Bergoglio is a master,” Bergman wrote in the Argentinian media after Francis’ election. “True to my Jewish roots and rabbinical vocation, inside my home community and the entire Argentine society, I found in Francis a teacher who heard me, guided me and advised me on how to deploy my vocation to serve both the Creator and his creatures in defiance of common good.”

Last December, Bergoglio joined Bergman and other Jewish leaders and representatives of other faiths in lighting Chanukah candles.

Francis is cited with particular warmth by Argentinian Jews for showing solidarity with the Jewish community following the 1994 bombing of the AMIA Jewish community center in Buenos Aires that left 85 dead. The attack, Francis told the Argentinian media, was “another link in the chain of pain and persecution that God’s chosen people has suffered throughout history.”

In 2005, he signed a petition for justice in the AMIA bombing case and a document called “85 victims, 85 signatures.” In June 2010, he visited the rebuilt AMIA building to talk with Jewish leaders.

“The closeness between Francis and the Jewish community is special and precious,” Rabbi Gary Bretton-Granatoor, vice president of the World Union of Progressive Judaism, told JTA.

Bretton-Granatoor, who is based in New York but has met Francis a couple of times, called the new pope “a mensch” who “gets the importance of a relationship with the Jewish community, who understands the meaning of the Shoah and has a heart in the right place on a number of issues that concern us as well.”

Obviously, he added, “we will vigorously disagree with him on many fundamental issues as well—but that is part of the game, isn’t it?”