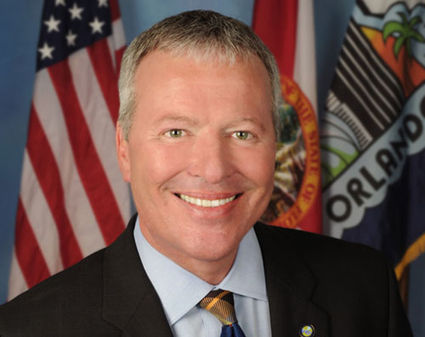 If you walk into Orlando Mayor Buddy Dyer’s office and see a wood carved alligator, you might naturally assume it was made in Florida. However, you’d be guilty of not examining all the evidence. It is in fact one of his favorite souvenirs from a very different state: the State of Israel.

With Obama having announced a Middle East trip to include Israel, his first visit as president, I grew curious about Dyer’s own ties to Israel. Sure enough, the mayor of the City Beautiful visited the mayor of the White City, Tel Aviv, in 2011. He met with mayors of other cities as well, and toured much of the country. He said his favorite stops were Bethlehem and the Old City of Jerusalem. “You truly cannot grasp the beauty and meaning of Israel just from pictures,” said Dyer. “You have to be there.”

A lot of Dyer’s talks with officials were about city security. “No one understands security like Israel” Dyer said. “No one.”

Dyer said that he didn’t fully understand how tiny Israel was until he traveled around it, and said that its size reinforced, for him, its need to defend itself. “When you have hostile forces right at your border, you have an unequivocal need to defend yourself.”

Dyer had no advice to offer the president on his upcoming trip. “I’m confident the president will surround himself with the best Middle East advisors available,” Dyer said. “I trust in that process.”

Dyer understands the symbolism of freedom that Passover stands for. He himself has been to several seder meals as mayor in Orlando, and has attended a number of multicultural services that included aspects of Jewish worship.

When asked what he wanted to say most to Orlando’s Jewish residents, it was that “Orlando is at its best when it is embracing diversity, tolerance, fairness and equality.”

Dyer closed our interview by bidding the Central Florida Jewish community a happy and healthy Passover.