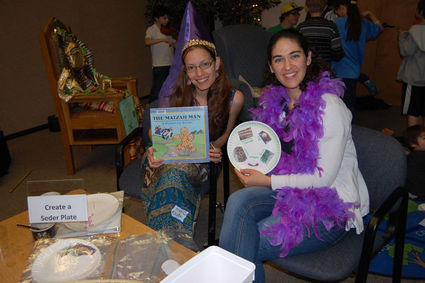 Kristin Abramson, left, and Caroline Bloom help keep the children entertained with storytelling and art projects at CRJ’s A to Z Passover Festival.

Children and adults flocked to the Congregation of Reform Judaism for a morning of Passover treats, music, wine and educational activities at the first A to Z Passover Festival on March 17 in the synagogue’s social hall. 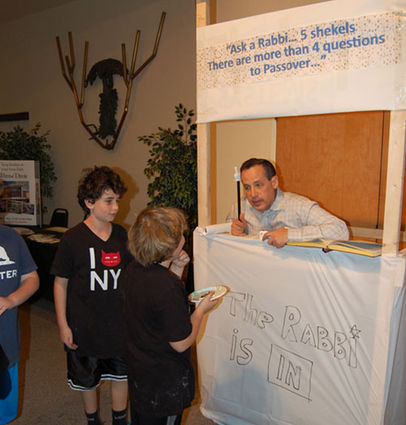 Inspired by Peanuts, CRJ Rabbi Steven Engel hangs out his sign that the rabbi is in and will answer your questions for 5 shekels.

Among the most popular features of the communitywide event was the Ask a Rabbi Q&A booth, which was manned by CRJ Rabbi Steven Engel. The booth—built by the rabbi—was fashioned after the psychiatrist booth used by Lucy in the Peanuts comic strip. But instead of costing five cents for amateur psychiatric services, this booth charged five shekels and was strictly limited to children’s questions about the Passover holiday.

The A to Z Passover Festival, chaired by Norma Ball, was designed to answer a variety of questions about the holiday—from how to make your own Haggadah to how to set the table for a Passover seder—particularly for those who are new to Judaism or new to the community.

The event also featured samples of homemade Passover desserts, Passover wines and catered Passover delicacies from Bagel King and TooJays. There was also a horseradish eating contest for adults and several activities for children, including opportunities to make a “matzah house” (think gingerbread house made of matzah) and a seder plate.