Seder points out too many Americans still going hungry 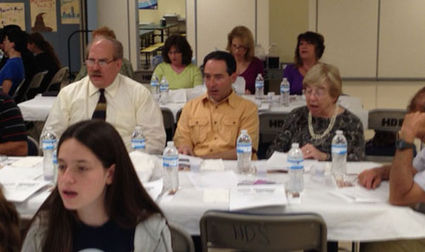 Among those attending the Hunger Seder were, from left, Eric Geboff, Bill Sholk and Barbara Weinrich. Reagan Moskowitz is in front.

Beit Hamidrash students, parents and community members gathered March 18 for a Hunger Seder led by Rabbi David Kay.  Hunger Seder observed the ancient traditions of Pesach in the context of a stark reality: that too many of our fellow-Americans are still going hungry.

This seder’s message provided an important call to action for the Central Florida Jewish community to join in efforts to end hunger in America.

The more than 50 participants brought canned goods to be donated to the JFS food pantry. The Hunger Seder also featured the movie: “Food Stamped, Is it Possible to Eat Healthy on a Food-Stamp Budget?”

This program was sponsored and made possible by Mazon and JCPA through the Beit Hamidrash program. Beit Hamidrash is a program of the Jewish Federation of Greater Orlando.

Federation’s mission is to care for people in need here at home, in Israel and around the world and to nurture and sustain Jewish life and learning today and into the future.