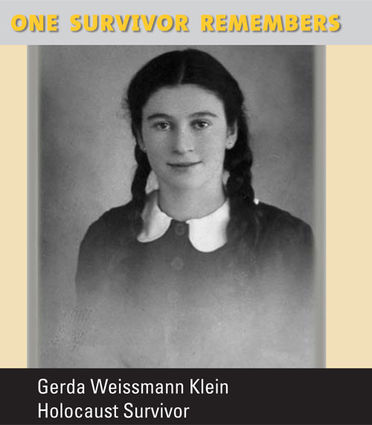 The Southwest Orlando Jewish Congregation (SOJC) will honor the lives and memories of victims and survivors of the Holocaust at a Yom HaShoah commemoration open to the public on Sunday, April 7, at 10:30 a.m. at SOJC, 11200 South Apopka Vineland Road, Orlando 32836.

As part of the commemoration, Max Waldor, a member of SOJC and Life Boy Scout who has just returned from a school trip to Auschwitz and Birkenau, will share stories he has been collecting and will unveil the tile images he has designed that will make up the Holocaust memorial mural of SOJC. The mural is a testament to the human spirit and tells the stories of survivors and victims of the Holocaust in a unique and creative manner.

“Max has created a project that honors his faith and his congregation,” Max’s Eagle Scout Coach Tim Volpert commented. More information is available at http://www.sojc.org/holocaustmemorial/.

The HBO Special and Academy Award winner for Film Documentary, “One Survivor Remembers,” the story of Gerda Weissmann Klein, who survived the Holocaust and whose story is included in the memorial project, will also be shown and discussed as part of the commemoration.

“We, the Jewish people, have the responsibility to keep alive the memories of all those lost during the Holocaust. Our annual commemoration of Yom HaShoah is an incredibly important and powerful experience and we are very proud that Max has taken on such an important project,” said Rabbi Hillel Skolnik, the spiritual leader of SOJC, who along with Cantor Doug Ramsay will conduct a memorial service that will conclude the commemoration.