For Naama and Toledo, it's been a love affair 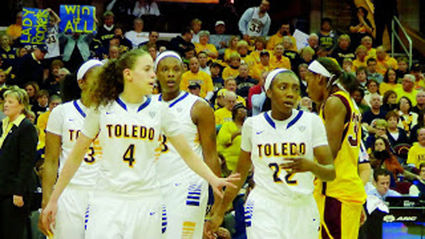 The love affair between Naama Shafir and the city of Toledo, Ohio, began five years ago.

That’s when the 18-year-old girl from Hoshaya, Israel, packed her bags and went to the Glass City. She knew no one there and knew little English.

Little did she know that she would emerge as the greatest player in Toledo women’s basketball history.

The year was 2008 and the Rockets were in desperate need of a point guard. That’s when a friend of coach Tricia Cullop told her she needed to check out video of Shafir.

The rest is history.

“I talked to a lot of people,” Cullop told the Cleveland Jewish News during the Mid-American Conference Women’s Basketball Tournament two weeks ago at Quicken Loans Arena, where her top-seeded Rockets were upset by fourth-seeded and eventual champion Central Michigan, 66-61, in the semifinals.

“We needed a point guard very badly. I called all around the world, all around the nation, and we found out about Naama. She came to the university and into the United States for the first time ever on her official visit. Actually, it was a visit to come to school. She trusted us that much with her father. We’re very grateful that she chose Toledo and has been here for five years now.”

Cullop knew Shafir could play basketball, but she knew little, if anything, about Orthodox Judaism.

“I had to go through a learning curve, but we had plenty of people in the city of Toledo that educated us very quickly,” said Cullop, a three-time MAC coach of the year. “We did a lot of homework, but I’d do it again in a heartbeat. I’d take another Naama Shafir any day.”

Many coaches deal in wins and losses exclusively, but Cullop had to deal with more. What were some of the issues that confronted her and the Rockets?

“I think the main thing is just making sure that she got to the site we were going to play at Friday before sundown and that we had transportation for her after sundown on Saturday, like we’ll have to do today,” said Cullop on March 15.

It’s also meant providing Shafir with kosher meals and the proper attire for her to cover her shoulders.

“But to be honest, all those things are very minute compared to probably all the adjustments she had to make to be around us,” Cullop said.

The stories have been told in Sports Illustrated, USA Today, The New York Times, CNN, The Associated Press and countless others.

Shafir keeps kosher–not an easy thing when traveling for road games. There was the time when a restaurant refused to heat up her meal, so the entire team took their meals out and ate with Shafir. Since she couldn’t travel in a motorized vehicle on Shabbat, she and a teammate or coach would arrive prior to sundown Shabbat. There were times she had to walk miles from a hotel to the arena for a Saturday afternoon game. And, of course, Shafir couldn’t use a hotel room keycard, push an elevator button or do anything else that required electricity.

Over time, more Shafir stories will become legend. Others already are.

Like the time in 2011 when she erupted for 40 points to lead Toledo to the Women’s NIT championship over Southern California, 78-68. That game was played before more than 7,000 screaming fans at the campus’ Savage Arena. For her efforts, she was rewarded with the tournament’s most valuable player award–but then walked home without granting postgame interviews until after Shabbat.

Then there’s the story that legends are made of–literally. It’s been reported that a rabbi told Shafir it’s OK to take the court on Shabbat because it’s considered play but that she couldn’t practice because that’s work.

Shafir, the daughter of Shlomit and Itzik, has four brothers and four sisters and grew up playing basketball whenever she could.

“I always loved playing sports with my friends, with the boys, my older siblings,” Shafir told the CJN. “I just love basketball.

“I learned how to be quicker and be aware of what’s going on all the time. It’s better competition.”

Watching her in the MAC semifinals, one could see why she has been the heart and soul of the Rockets. As the four-time all-league player goes, so go the Rockets.

And it’s easy to see why Toledo’s Jewish community fell in love with this 23-year-old, a pony-tailed, scrappy kid whose smile can light up a room.

“We fell in love with Naama,” said Sharon Ravin of Sylvania, a Toledo suburb, who displayed an Israeli flag inside The Q. “We met her at our (Orthodox) shul, Congregation Etz Chayim. We got two to three dozen people from the synagogue to buy season tickets to make Naama feel like home.”

“They’ve been very supportive and they made me feel like I’m home,” Shafir said of Toledo’s Jewish community.

With a heavy Israeli accent, her father said, “From the beginning, they are very supportive. Everyone we asked here, helped us. They really loved her.”

Ravin and her husband, Beryl, have seen attendance double to more than 4,000 on a regular basis when the women take the court. Many of them come to see one person–co-captain Shafir, the 5-foot-7 sparkplug who was granted a fifth year of eligibility after tearing her anterior cruciate ligament in November 2011.

Shafir rarely disappoints the crowd, skillfully finding an open teammate for an easy shot, diving to the floor for a loose ball, taking a charge, reaching in to make a steal, swishing a 3-pointer or calmly sinking a tough layup. She can do it all.

She’s the main reason the Rockets were 26-3 during the regular season and top-seeded for the MAC tournament.

“It’s great. I love it. I wish I had a better ending, but I loved it,” Shafir said of her collegiate career following Toledo’s heartbreaking loss to Central Michigan.

She was looking forward to a MAC championship and automatic bid to the NCAA Women’s Tournament. That dream ended as the Rockets struggled against Central Michigan, with Shafir scoring 15 points in 39-plus minutes of play. She made her first two shots but finished just 6-of-21 from the field, including 2-of-6 from 3-point land. She grabbed seven rebounds but had only one assist and one steal while uncharacteristically committing five turnovers. Despite all that, the Rockets trailed 62-61 with 34 seconds left, and had a few chances to win the game.

“We still have more games to play,” an optimistic Shafir said. “We lost today, but had a great season. We lost three games and won 27.

“It’s hard, because I want this so bad for five years,” she said as she fought back tears. “I mean it’s not going to be easy because that’s not the way we want to finish this tournament, but we know we have more games to come, and I mean every game with this group will be fun to prepare for, and it’s going to take a little bit of time, but we’re going to be excited for what’s next.”

Shafir hoped for a better ending in the MAC tourney, especially with a personal cheering section that included her parents and her brother Eliezer. After seeing only a handful of games in person–they watched all by Internet except those played on Shabbat–they spent about two weeks in the states and saw Shafir’s emotional final home regular-season game at Savage Arena the previous week.

Her mother said in broken English, “It’s very difficult. But we saw her with the Internet, the games and Skype.

Shafir, who speaks English well, returns to Hoshaya every summer, and last year the entire Rockets team took an educational and bonding trip to Israel. Meanwhile, her parents keep her up-to-date on the latest developments in the Middle East.

“Every time I talk to my family, they tell me what’s going on,” said Shafir, who has spent holidays in University Heights with the Goldberg family. “And everything sounds a lot worse when you’re not there, so they kind of keep me updated, and it’s fine.

Despite everything that she has accomplished on the hardwood, Shafir doesn’t see herself as a role model for young, Jewish girls.

“That’s not my intention,” she said. “I’m just playing basketball. If younger kids looking up to me, and see, oh, I can play basketball as Jewish … I’ll be happy. But that wasn’t my goal.”

“Naama’s been the heart and soul of our program,” she said. “She’s an outstanding player, but even more so, she’s a classy kid and an outstanding leader. I’m very grateful and honored that I’ve had the chance to coach her.”

Shafir, who is expected to graduate in May with a degree in business management, hopes to continue her career as a professional in the WNBA, in Israel or in Europe.

“I’m waiting ’til the season is over to make decisions,” she said. “I just know I want to keep playing basketball.”

The season continued March 21 when the Rockets beat Butler, 63-49, in a Women’s NIT game after being snubbed by the Women’s NCAA Tournament. The Rockets then beat Youngstown State, 61-43, to advance into Round 3 against Illinois, where they lost, 63-55, in Toledo on March 28.

Bob Jacob is the managing editor of the Cleveland Jewish News.