'Putting a face on every soldier' 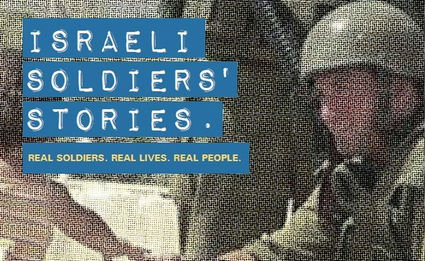 StandWithUs A flyer for the StandWithUs “Israeli Soldiers Stories” program.

Ben, an Israel Defense Forces reservist, recalls when his unit took up a position to sleep inside a beat-up old Volkswagen van outside a Palestinian village. Hearing a knock on their van’s door, and preparing for the worst, the soldiers jumped up with their guns ready—only to discover it was a “little old Palestinian grandma.”

Telling personal stories such as that one, which Ben recently recounted at Boston University (BU), helps put a human face on Israeli soldiers who are often condemned by anti-Israeli activists as “war criminals” or worse, Ben believes.

“The most important thing for me is putting a face on every solider, I think it’s important for people to understand that Israeli soldiers aren’t super soldiers, they aren’t Spartans or what you see in the movies,” Ben tells JNS.org. “We are just regular kids, but due to the circumstances Israel faces, we have to join the army in order to protect our country from existential threats.”

Ben’s talk at BU was part of a unique program from the pro-Israel education group StandWithUs called Israeli Soldiers Stories. Now in its fifth year, the program attempts to bring a fresh perspective to the IDF by sending 12 Israeli solders on a speaking tour of campuses, schools and community centers in dozens of cities across the U.S.

“I am a core believer in that if we can change one kid’s perspective then we have been successful,” Ben says. “If I can open up one apathetic student, then personally I feel like I have achieved something.”

“However, I do think there needs to be larger campaign for pro-Israel students to be informed and to know how to counter such [negative] claims about Israel,” he says. “I also think they need to be taught on how to answer.”

But Jossi, another soldier who participates in the program, tells JNS.org that he feels students shouldn’t always need to worry about countering their anti-Israel counterparts.

“Why should they always be countering? Why can’t people come, who have been to Israel, and share something positive and personal about their experience?” Jossi says.

For Ben and Jossi, the most effective tool on their speaking tour was recalling their army experience and offering students an unfiltered perspective about Israel and the threats it faces.

“It is important for people to understand the kind of day to day weights and measures we have to deal with in the army. When you’re confronted with moral dilemmas, how do you balance the ethics of the IDF with keeping yourself safe?” Jossi rhetorically asks.

The soldiers said that to their dismay, the speaking tour confirmed the general apathy, ignorance, and latent anti-Israel hostility they had heard existed on American campuses.

“I sort of had a preconceived notion [about campuses being bad here for Israel]; I was sort of secretly hoping was wrong. But after traveling here, what I was told about American campuses in Israel is mostly true. There is a large amount of apathy in the student body and anti-Israel feelings that come from misinformation or no real knowledge of the situation,” Ben says.

At one event at Smith College in Northampton, Mass., a group of students from Students for Justice in Palestine (SJP), an anti-Israel organization with chapters throughout the U.S., showed up to protest the event.

“They stood up a few minutes into Ben’s story, took off their jackets to expose their black shirts with papers that read a Palestinian child’s name, death, and ‘SILENCED.’ They walked out a few minutes later. Both Ben and Jossi asked them to stay and ask questions during the Q&A, but they silently all continued to walk out,” StandWithUs New England Campus Coordinator Lihi Benisty tells JNS.org.

Jossi criticized the students, who apparently belonged to an SJP chapter from nearby Hampshire College, for their closed-mindedness.

“If you’re at a time at university when intellectual curiosity is supposed to be at its peak and your eager to come listen to a group of people from a different country where you don’t live and don’t have experiences in. And then you decide the best way to learn from them is to make sure they know you are not listening to them, seems to be a futile and self-defeating exercise,” Jossi says.

Nevertheless, the tour had its positive moments for the soldiers.

“I spoke to a Muslim girl from Yemen. She asked me if I thought the rest of the Middle East would be able to accept Israel. I said historically it seems unlikely, however I still remain hopeful. I then asked her the same question and asked if Yemen would ever be able to accept us and after breaking out into a smile she said ‘no,’” Ben says.

For many pro-Israel students, overcoming apathy and generating interest in Israel is the main problem, not debating the conflict with anti-Israel activists.

“Not every student wants to get into these types of ‘campus wars.’ A lot of people who support Israel support the country for positive reasons,” Jossi says. 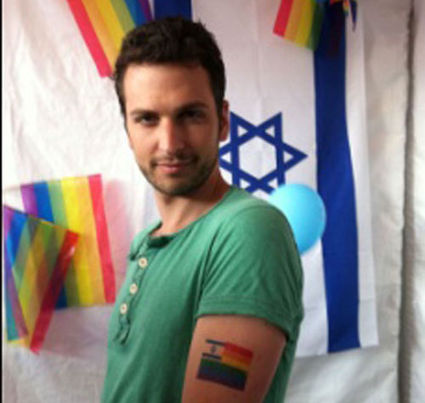 Jossi, an IDF reservist who is part of the StandWithUs “Israeli Soldiers Stories” program.

For these students, sharing their personal Israel experiences or highlighting the positives of Israeli society, such as its diversity and its high-tech industry, can be effective. Groups like StandWithUs, meanwhile, provide the tools, resources, and programs such as Israeli Soldiers Stories that can help students develop their own positive personal narratives about Israel.

But for those students on the campuses with active anti-Israel groups like SJP, it is challenging to work up the courage to overcome anti-Israel hostility.

“I am hoping for a future where people everywhere will let others talk about Israel more openly, however there is still this open hostility to Israel on campus, we have also often heard of hostility from the faculty, which is the most disheartening thing to hear. The biggest thing is getting involved and getting support from other groups,” Jossi says.