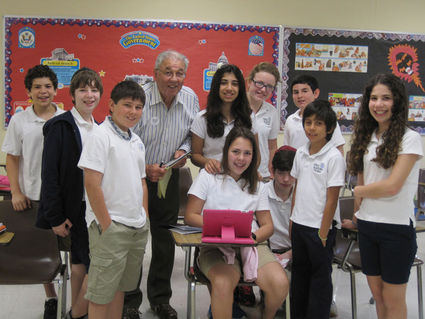 “You are who they were.” This is just one of many quotes Laurence Morrell uses with his middle school students at the Jewish Academy

of Orlando. Morrell, a longtime and enthusiastic genealogy hobbyist, also the past president of the Jewish Genealogical Society of Greater Orlando, is volunteering

his time and knowledge to teach 11 JAO middle school students the basics of genealogy research.

When asked why, Morrell answers with a gleam in his eye and a broad smile. “Because it’s important. Too often when people begin doing their genealogical

research, they will often say, ‘Oh, I should have started 20 years ago.’ By this he means that quite often, a major, first-hand source of information is no longer

available. Once that source is gone, it’s gone unless….”

That is why he is so interested in having young people get started. People who are technologically savvy. Young

mechanism to develop and strengthen the lines of communication between the students and their grandparents—and in some cases, their great-grandparents.

assignment was to begin filling out their “pedigree chart” also known as a “ family tree.” This is a good way to get them started and letting them know how much they still have

to learn about their families’ histories.

One of the interesting aspects of teaching genealogy to these young teenagers is that they do have living parents, grandparents and even great-grandparents.

Because of modern day communications with Skype, Facebook, Twitter, smart phones and including regular old fashioned land line telephones there is a possibility of

constant and instant communication. This allows the students to ask their primary sources of first-hand information questions directly.

When moving into electronic researching, quite

are not old enough to have been included in the 1940 Federal Census. As a result, they must get either first-hand information or search the 1930 Federal Census and 1920

Federal Census for their great-grandparents’ information.

In addition to the Federal Census, Morrell teaches his students how and where to locate Vital Record documents such as birth certificates, marriage and divorce

Because of the age of the students, Morrell says, “Quite often, they can trace back five generations and never

get out of the 20th century.” It is only then when they can begin getting information about the ‘old country.’”

What is exciting for many of the students is to see the passenger list of the ship their ancestor came to America on from Europe. They also get to see the name of the ship

as well as a photograph.

Another interesting feature with this class is that several students are Israeli and one was born in Venezuela. This adds a totally different dimension to the class dynamic.

They are not left out. Morrell is also providing them with Internet sites to research their families in Israel, Venezuela, Hungary and Spain.

So far, the students say they are excited about finding and seeing copies of the actual documents pertaining to their ancestors. It is Morrell’s hope that this enthusiasm and interest will spread

to their parents and grandparents so that a complete pedigree chart can be completed, family histories can be recorded and traditions passed on to future generations.