Arab Spring, Israel and Bahrain's 38 Jews in the eyes of Jewish ambassador to U.S. 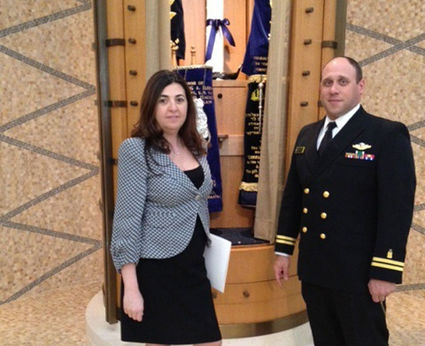 Houda Ezra Ebrahim Nonoo, Bahrain’s ambassador to the U.S., with Orlando’s Lt. Josh Sherwin, USN, the Jewish chaplain at the U.S. Naval Academy, in front of the Ark at the Miller Chapel, Uriah Levy Center.

Tiny Bahrain consists mainly of a 34-mile island connected to Saudi Arabia by a causeway, but aside from having modest oil and gas reserves, a booming market-based economy and lots of tourism, it also happens to be the home of the U.S. Navy’s Fifth Fleet that patrols the Persian Gulf, the Gulf of Oman and the Red Sea.

Bahrain’s strategic military location is complemented by its symbolically important place in the Arab world for a relatively liberal and tolerant society despite its own brief version of the “Arab Spring” in 2011. Christians, women and Bahrain’s 38 Jews live relatively well and as equals among the larger Muslim population. One of those Jews is Houda Ezra Ebrahim Nonoo, Bahrain’s ambassador to the U.S. and the first Jew to hold such a position in the modern Arab world. She was appointed by Bahraini ruler Sheikh Hamad bin Isa al-Khalifa. Nonoo’s ancestors came from Iraq more than a century ago. Both her grandfather and a cousin have also served as government officials.

JNS.org recently interviewed Ambassador Nonoo before she spoke at the U.S. Naval Academy in Annapolis, Md., where she gave a speech before current and future U.S. naval officers, some of whom may likely serve in or near Bahrain. The audience included retired Admiral Doug Katz, a Jew from West Virginia and former commander of the Fifth Fleet.

In her speech at the academy, Nonoo stressed the close relationship between the U.S. and Bahrain. But that closeness does not extend to Bahrain’s relationship with America’s ally, Israel, a country Bahrain does not recognize. Nonoo reflected on that diplomatic situation (or lack thereof), the state of Bahraini Jewry, and how the Arab Spring has changed her job in the following interview.

JNS.org: What in your background and experience most qualified you for the ambassador position?

Ambassador Nonoo: “My story is deeply interwoven with what makes Bahrain such a special place. After completing my studies in the United Kingdom, I returned to Bahrain to run the family business with my husband and brother. In 2005, I helped to found the Bahrain Human Rights Watch Society—a group dedicated to advancing women’s rights and the rights of expatriate workers living in Bahrain. The work I did there came to the attention of His Majesty King Hamad bin Isa Al Khalifa, who appointed me to serve in the Shura Council—the upper chamber of Bahrain’s parliament. After several years of service in the Shura Council, I received a call in 2008 from Bahrain’s Foreign Minister, His Excellency Shaikh Khalid bin Ahmed Al Khalifa, who informed me that His Majesty nominated me to serve as Ambassador to the United States. I arrived in July 2008 and it has been my pleasure to have served since then.”

Q: What is the status of the few dozen Jews in Bahrain? Are they free to worship freely?

A: Jews, like all faiths in Bahrain, have full freedom of worship. Our tradition of religious freedom has grown organically out of Bahrain’s position as a center of trade for millennia. Bahrain, for example, is home to the first church in the Arabian Gulf, which was established by American missionaries in 1893, and hosts the administrative offices of the Vatican’s Vicariate of Northern Arabia. Today, next to thousands of mosques, Bahrain is home to 19 churches that serve different denominations, Sikh and Hindu Temples, and a synagogue. We are tremendously proud of the standard that we have set in our part of the world.

Q: Can you detail your work with the professor Hezi Brosh, a professor who teaches Arabic at the Naval Academy, and your interaction with the midshipmen?

A: From time to time, I have the pleasure to host visitors at the [Bahraini] Embassy in Washington. In December 2011, I hosted a group led by professor Brosh for a cultural event at the Embassy. We had such a good time at the event that I invited them to our National Day celebration only a few days later. It was a great honor to host them and to acknowledge their service in defense of freedom around the world.

Q: What are the critical areas of concern for the relationship between the United States and Bahrain?

A: Bahrain and the United States have been close friends and allies for over 60 years. During this time, we built an enduring partnership that spans the full range of political, economic and security issues. At the present, we are working to expand our economic partnership through the U.S.-Bahrain Free Trade Agreement, the first to be signed between a [Persian] Gulf country and the U.S. in 2006. We are also working closely to confront common threats we face in the Gulf.

Q: There are three pages on the Bahraini Embassy’s website about foreign affairs. One on Darfur, one on Iraq and one on what is called “Palestine Peace Process” rather than “Israeli-Palestinian” peace process. On that page, Israel is not even mentioned until way down the list, and then only in a negative manner, with nothing said specifically about its right to exist or its security. In your role, how are you able to help bring about any positive change in your country’s stance toward Israel?

A: Like most states in the Arab World, Bahrain does not currently have diplomatic relations with the State of Israel. We have, however, repeatedly affirmed our support for the Arab Peace Initiative, which calls for full normalization with Israel following a withdrawal to the 1949 armistice lines and an equitable solution to the Palestinian refugee crisis. This peace plan remains the surest path to peace in the region. Bahraini leaders, including His Royal Highness Crown Prince Salman bin Hamad Al Khalifa, have spoken repeatedly on this topic.

Q: Have you visited Israel or do you have friends or family living there?

A: As Bahrain has not established diplomatic relations with Israel, I have never visited there. I have family members living all over the world.

Q: How has the “Arab Spring” affected Bahrain and your role as ambassador?

A: The “Arab Spring” has certainly changed my job in Washington. Prior to February 2011, most Americans couldn’t find Bahrain on a map. On Feb. 14, we became a name and a place. Over the past two years, I have worked diligently to dispel myths about Bahrain in the media and have spent a great deal of time meeting with American leaders to communicate the positive steps we have taken to address the legitimate aspirations of our people. The work our diplomats do in Washington is critical for the future of our country. Bahrain has provided me with so much, and its future as a progressive, religiously tolerant country is something I am committed to protecting.