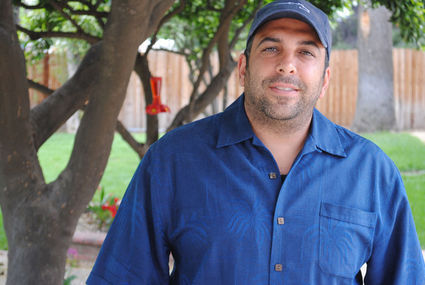 Private investigator Eric Agaki says he is especially proud of his role in uncovering the fraudulent practices of the Doheny Glatt Kosher Meat Market in Los Angeles.

LOS ANGELES (JTA)—A semi-automatic weapon sits propped beside the front door of the ranch-style home that Eric Agaki shares with his wife, a couple of goats, some chickens and a horse. Only it’s not the real thing.

“That’s an air gun for raccoons,” Agaki says. “For intruders I’ve got other things.”

Agaki, 41, is particularly concerned with home security, and with good reason. A private investigator for the past 10 years, Agaki has put murderers in jail and staked out hundreds of spouses suspected of extramarital affairs.

Most recently, he exposed the unkosher business practices of the Doheny Glatt Kosher Meat Market, one of this city’s largest purveyors of kosher meats.

Days before Passover, Agaki showed a group of Los Angeles rabbis the video he shot of Michael Engelman, Doheny’s owner, loading boxes of meat into the trunk of an SUV in a McDonald’s parking lot. A second video showed Engelman at his store in the Pico-Robertson neighborhood, where a worker carried the boxes inside. The mashgiach, or rabbinic overseer, was nowhere in sight.

As a result of Agaki’s seven-month investigation, the Rabbinic Council of California revoked Doheny Market’s kosher certification on March 24. The following day, the U.S. Department of Agriculture launched an investigation. Within a week, Engelman sold his shop to businessman Shlomo Rechnitz.

All of this happened because of Agaki, though the investigator has not been paid a dime.

Born in Israel to Persian Jewish parents, Agaki moved to Los Angeles at age 12. He never served in the Israeli army, but he has more than a decade of training in the Israeli hand-to-hand combat method known as Krav Maga. His height may not intimidate, but his thick torso and massive biceps would be enough to ward off many threats. As would the Kahr CW9 handgun he carries at all times.

“I’m licensed to carry an exposed gun,” he says, pulling back his shirt to reveal a silver 9mm pistol tucked into a brown leather holster.

In his decade of private investigation, Agaki has never had to use the handgun. Nor has he had to use the collection of shotguns, hunting rifles and Civil War-era reproduction pistols that he keeps in a refrigerator-sized safe in his bedroom. He uses the four wood-handled pistols for Civil War reenactments, which he participates in once a year at an event billed as the largest annual Civil War battle reenactment west of the Mississippi.

For fun, he also collects knives and swords. A glass case filled with Samurai blades sits near the mezuzah at the entrance to his living room.

In September, a group of rabbis approached him with a host of rumors that Engelman was up to no good. Agaki clocked more than 150 hours of work on the case.

Agaki started his firm, Hover View Investigations, after graduating at the top of his class from the Nick Harris Detective Academy in Van Nuys, Calif. It was a dream deferred. He had enrolled at the academy right after high school, but had to drop out when he couldn’t afford the tuition.

Eventually he opened a candy store in Westwood Village. Later Agaki worked as a dental technician, then as a helicopter pilot. Finally a girlfriend encouraged him to return to his original passion.

Twelve years after he first enrolled, Agaki was back at the Harris academy. Within two weeks he convinced an instructor to put him on a case with the school’s affiliated agency. The case involved a husband who suspected his wife of drug abuse.

He followed the woman all day and photographed her hiding bags of cocaine in the trunk of her car.

“I’m very good at keeping myself hidden when I follow you by car,” Agaki says. In P.I. lingo, the skill is known as “rolling surveillance.”

Not long after, Agaki was hired by another firm to track a suspected cheating husband who routinely drove between 80 and 120 miles per hour on the freeway. Where other private investigators had failed, Agaki was able to track him 76 miles from Thousand Oaks, in the San Fernando Valley, to Riverside County, where the suspect parked at a nudist colony in Corona.

After sweet-talking a secretary, Agaki managed to slide into the nudist colony in under an hour—a process that normally takes weeks.

“To be a good P.I., you have to have good hand-eye coordination, be a good driver, be some kind of an actor and be a good videographer,” Agaki says. “You also need to know people and be able to profile them.”

For all of his successes as a P.I., Agaki says it is the Doheny case of which he is most proud.

“I’ve put a murderer behind bars,” he says. “But this had an impact on a lot of people.”