At last, Warsaw's Museum of the History of Polish Jews is dedicated 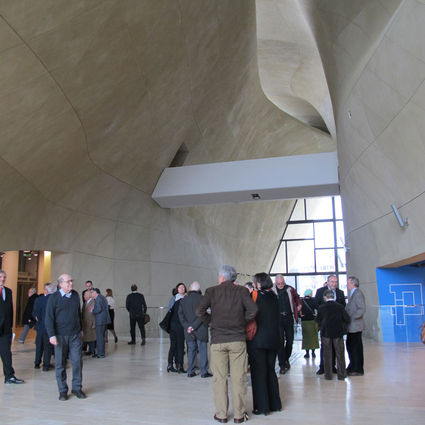 Interior of the Museum of the History of Polish Jews in Warsaw showing swooping walls.

WARSAW, Poland (JTA)—Krzysztof Sliwinski, a longtime Catholic activist in Jewish-Polish relations, gazed wide-eyed at the swooping interior of this city’s Museum of the History of Polish Jews.

Nearly two decades in the making, the more than $100 million institution officially opened to the public last week amid a month of high-profile, state-sponsored events marking the 70th anniversary of the Warsaw Ghetto Uprising.

Sliwinski organized Jewish cemetery cleanups and other pro-Jewish initiatives under communism, when Jewish practice and culture were suppressed by the regime.

On April 14, both Sliwinski, now 73, and Bartoszewski, 91, joined hundreds of local Jews and other VIPs as Poland’s chief rabbi, Michael Schudrich, unveiled a mezuzah at the museum’s main entrance.

Reflecting this symbolism, the mezuzah was made from a brick from a building in Warsaw’s prewar Jewish quarter, the area that the Nazis turned into the notorious ghetto and where the museum now stands.

A huge flattened cube with a shimmering façade—broken by a dramatic gap that symbolizes both the biblical parting of the Red Sea and the rupture caused by the Holocaust—faces the monument to the heroes of the ghetto uprising.

“I am one of the few here who witnessed the unveiling of the ghetto monument in 1948,” Bartoszewski told guests following the mezuzah ceremony. “If anyone had told me then that this could be happening now, I would have said they were crazy.”

Designed by the Finnish architect Rainer Mahlamaki, the striking building with undulating interior walls is in fact still largely empty. The museum will inaugurate its cultural and educational programs on Friday, but its core exhibition—an interactive narration of 1,000 years of Polish Jewish life—will not be installed until next year.

“The museum is a part of the history that it tells,” Barbara Kirshenblatt Gimblett, the New York University professor who is overseeing the design of the core exhibition, told JTA. “It speaks to the renewal of Jewish life in Poland, to the enormous Jewish presence in Polish consciousness.”

On the eve of World War II, Poland had the largest Jewish population in Europe, with 3.3 million Jews making up one-tenth of the country’s population. More than 3 million Polish Jews were killed in the Holocaust; thousands more survivors left in the wake of postwar pogroms. Still more departed in the 1960s amid anti-Semitic campaigns by the Communist regime.

But with the fall of communism, there has been a revival of Jewish life in Poland and a movement by Jews and non-Jews to reclaim Jewish culture.

“Imagine, the idea for this museum arose in 1996, just a few years after the fall of communism,” Kirshenblatt Gimblett said. “The many efforts of the last two decades to renew Jewish life, to recover the Jewish past, and to foster open debate and dialogue about the most difficult moments in the history of Poland and Polish Jews have created the momentum and support for this initiative.”

The only permanent part of the exhibit installed to date is the dazzling reconstruction of the roof and painted ceiling of an 18th century wooden synagogue that once stood in Gwozdziec, now in Ukraine. So stunning that it has been compared to the Sistine Chapel, it features a wealth of brightly painted folk designs combined with Jewish symbolism: lions, griffins, Zodiac signs, birds, flowers, unicorns and much more.

Financed by the Polish state, the city of Warsaw and numerous Jewish and non-Jewish private donors, the development of the museum suffered setbacks and delays over the years due to political and organizational issues as well as funding shortfalls. The very idea of such a museum in Poland, which many Jews regard as a vast Jewish cemetery, was long a hard sell.

Over the past decade, however, Polish-born Jewish philanthropists such as Americans Sigmund Rolat and Tad Taube passionately took up the cause. Taube Philanthropies and the Koret Foundation collaborated to provide the largest private commitment to the core exhibition of the museum, a total of $16 million since 2007.

“The Taube Foundation and the museum share a similar mission: to understand not only how European Jewry died in the Nazi genocide, but how European Jewry lived in Poland and created a prodigious civilization over many centuries,” Taube told JTA. “This knowledge is not a betrayal of Holocaust memory. In fact, we honor Holocaust memory by reclaiming our rich, long and varied existence in Poland.”

Taube and others say they are hopeful the museum and the story it tells can have a long-term impact: on local Jews, local non-Jews, and the Jews from the United States, Israel and elsewhere who are expected to visit. 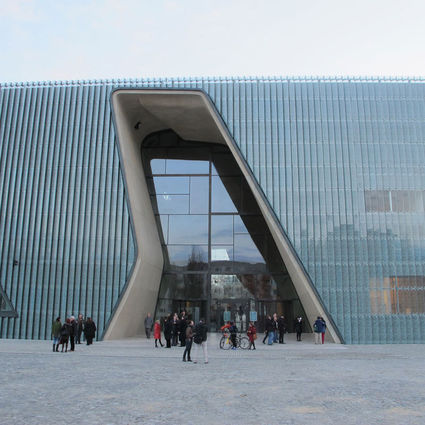 Exterior of the Museum of the History of Polish Jews in Warsaw showing the “gap.”

“The idea of there being an authentic Jewish community in today’s Poland is notoriously met with bewilderment and often sheer disbelief,” said Katka Reszke, the author of “Return of the Jew,” a new book about young Jews in Poland today. “The museum—its staff, its narrative and its programming—must be prepared to confront this skepticism and the often difficult questions coming from foreign Jewish visitors.”

Swiss diplomat Simon Geissbuehler, a historian who has written several books on Jewish history, called the museum and its mission “an important step forward.”

Still, he added, “We don’t have to have illusions. It will not change everything immediately. There are those who don’t want to recognize this part of their history. But I hope the museum will help.”