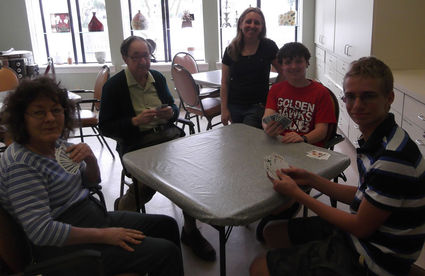 If you are a teenager, you have probably laughed at some of the reasons people tell you why you should learn to play the card game bridge:

“It will increase your math and logic abilities!” Great, so will Madden…

A common misconception about bridge is that there are not that many teenagers who play the game. Spencer Dyen is a 13-year-old bridge champion who lives in Maitland. He finds many teens, some older and even some younger, at the many bridge tournaments he enters each year since he was 8 years old. No matter the age of the players Dyen is learning great skills including shmoozing with senior citizens.

Dyen is a seventh grader at Maitland Middle school and recently became a bar mitzvah at Congregation of Reform Judaism. When he was in third grade at Bear Lake Elementary, he would join with other gifted students weekly for further enrichment. One way the students were enriched was by learning to play bridge with Bernice (Bea) Ronske. Every week of the school year the students spent a portion of their school hours learning the practices and strategies of bridge. Bridge is not known as a popular card game for young children and teens, but Dyen took a strong interest in it and began to play in tournaments both locally and nationally. He has traveled to New Orleans, Toronto, Philadelphia and this August he will go to Atlanta.

“He has become quite good,” says his mother, Anissa Dyen. “Our whole family has learned to play together.”

Spencer’s mother contacted Jewish Pavilion to introduce her son to the seniors in the community who may enjoy playing with a young teen and even learn a bit of new strategy from the young man. Program director Emily Newman arranged for Dyen to set up ‘shop’ on four Sunday afternoons at Chambrel Senior Living. He said he was pleasantly surprised to meet his mentor and bridge teacher of Bear Lake Elementary now living at Chambrel. Ronske is associated with the American Contract Bridge League and continues to offer bridge lessons at another senior living facility.

Not only is Dyen meeting up with old friends while playing bridge he is doing a wonderful mitzvah by offering his free time as a Jewish Pavilion volunteer, says Newman.

One highlight of Dyen’s globetrotting, bridge playing was when he and his friend Nick Laugen met Bill Gates at a tournament in Philadelphia.

If you can offer your time and hobbies to people living in area senior living facilities contact the Jewish Pavilion at 407-678-9363.