By Mark Pinsky
Special to the Heritage 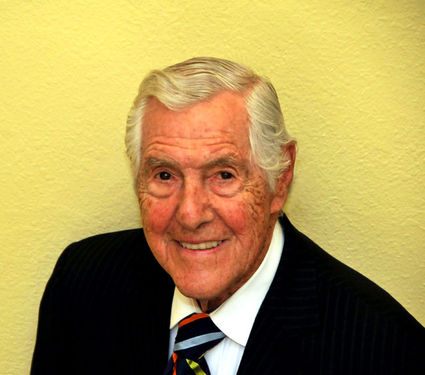 Dr. Norman Wall, retired Heathrow cardiologist and lifelong Zionist, will be honored Wednesday, May 8 at the Congregation of Reform Judaism, with the announcement of a multi-year fellowship for Israeli heart specialists.

Called The Norman M. Wall, M.D. Fellowship in Cardiology, the program is being established by Dr. Ron Waksman, Wall’s former student and one of the most outstanding cardiac imaging experts in the world. Waksman is associate director, Division of Cardiology at MedStar Washington, which is funding the fellowship with the participation of Sheba Medical Center.

Wall was a physician at a U.S. Army field hospital in World War II that later evolved into Sheba, now the largest medical center in Israel.

“It is with great pleasure and honor that we can resume Dr. Wall’s legacy of two decades of training Israeli medical students by initiating the Norman Wall Fellowship in Cardiology in collaboration with the Sheba MedicalCenter in Israel, his first medical experience in Israel,” says Waksman. A native of Israel, Waksman was one of many Israeli medical students to be mentored by Wall.

The May 8 event, co-sponsored by the Maimonides Medical Society of Greater Orlando, is free and open to the public. Light refreshments will be served. Waksman will discuss “Updates in Cardiology.”

The cardiology program will bring a fellow selected by Sheba for one year, from July 1 through the end of June the following year. The student will work under Waksman’s guidance, and is invited and encouraged to visit Wall in Central Florida.

“This fellowship, named for Dr. Wall, will bring great benefit to the Sheba Medical Center and to Israel, and I am gratified that it will carry Norman’s name,” says professor Zev Rotstein, Sheba’s director. “I thank Dr. Waksman for making this possible.”

Wall’s relationship with medical care in Israel began in 1943. As a U.S. Army medical officer stationed outside Tel Aviv, he collected surplus medical supplies from his base, which was about to close, and secretly delivered them to Dr. Chaim Sheba, head of the Haganah’s nascent medical corps, and for whom the medical center was named.

“We are deeply appreciative of the role the U.S. Army had in planting the seeds that later became Israel’s main hospital,” says Rotstein. “And we are happy to give recognition to our longtime friend, Dr. Norman Wall, for his participation in starting the hospital, and for his continued support and direct involvement in Israel’s medical achievements.”

Wall, 99, said he was “overwhelmed by this honor, a cardiac fellowship in my name that will bring Israeli doctors to the United States to study.”

A CRJ member, Wall is a longtime supporter of The Holocaust Memorial Resource and Education Center of Central Florida. In 2012, he was honored by the Kinneret Council on Aging as one of its “8 over 80” outstanding members of the Central Florida community.

Before retiring to Central Florida in 1995, Wall spent more than half a century as medical director of Good Samaritan Medical Center, a Catholic hospital in Pottsville, Pa., where an auditorium is named for him. While there, Wall wrote the first clinical papers on “Black Lung disease,” an occupational disease suffered by area coal miners.

Wall was instrumental in the founding of Ben Gurion Medical School in the Negev. Over the years that followed, many Ben Gurion students like Waksman studied during summers under Wall at his hospital. They are now some of the leading physicians and researchers in Israel.

“As the second medical student from Israel in the program I was inspired by Dr. Wall as a teacher and as a physician with great love and passion to Israel,” said Waksman. “This was the best ever introduction in practicing medicine in a U.S. community-based practice. The experience with Dr. Wall made a significant impact on my career as a physician, and I was fortunate to have this interaction early on in my training and made me a better physician.”

In a concrete way, the announcement of the fellowship closes a circle, Wall says.

“Ron came to my hospital in Pennsylvania as a student from the second class at Ben-Gurion University Medical School. He was among the many we would bring over the years. During that summer we became very close and the relationship over decades continue for me as a surrogate father.

“Now he, as one of the top cardiologists in America, honors me in  my 100th year. It fulfills my life as a cardiologist and my strong relationship to Israel. Nothing could be more precious to me.”

Wall’s rabbi, Steven Engel, joined the former students, both in the U.S. as well as Israel, in hailing the establishment of the fellowship.

“Dr. Norman Wall is a walking and talking reference of Jewish history,” said Engel. “His efforts in the early building of the State of Israel; his studies as a Jewish medical student living through the anti-Semitism of the time; the bridges he built between the Israeli and American medical communities; and the famous Jewish personalities he has interacted with throughout his 99 years makes Norman a tzadik, a precious treasure and teacher to our synagogue and the entire Jewish community.”

Dr. Leonard Dreifus, a former student, also of Heathrow, and a Master and former president of the American College of Cardiology, agreed.

“My friend and mentor Dr. Norman Wall, a major leader in medicine, has contributed much to the founding of Israel,” says Dreifus. “Norman has touched and enhanced the careers of many young physicians including mine. I have known Norman for 64 years. I admire his unselfish contributions to medicine and the State of Israel.”

Wall’s commitment to the Jewish people was not confined to Israel. He was fired by the anti-Semitism he experienced during the 1930s as an undergraduate and a medical student at the University of Pennsylvania, and even more so by the experience of examining freed concentration camp inmates following World War II.

Wall spent the time when not practicing medicine in Pennsylvania devoted to Jewish causes in the U.S. and around the globe. He fought social discrimination in his hometown; smuggled much-needed medical supplies to Jewish “refuseniks” in the Soviet Union during the 1970s; and led a fact-finding mission to Latin America on behalf of the Anti-Defamation League, where he was a national officer and was very active for many decades.

“I have enjoyed a remarkable life,” Wall says. “I was born to parents who fled the pogroms of the Czar in 1890; grew up in a small coal region town in Pennsylvania as the only Jewish boy, there free of any anti-Semitism; and during the Great Depression was able to go to college and medical school on scholarship.

“For the last 20 years I have lived in Orlando, which, for an old man was a delightful and fruitful period. My relationships with CRJ and especially with Rabbi Engel not only gave me a new appreciation of Judaism but he also was a wonderful friend.

“My younger friends have accepted me as a peer and subtracted years from my life. I have so enjoyed their company not only for social reasons but kept my mind alert on up-to-date avenues such as literature, the arts, politics and current events. The warm relationship has been a joy.

“I keep abreast with modern medicine and find stimulation with my medical friends. They are amazed how alert I still am. I also find time to continue my interest in fighting anti-Semitism and strengthening Zionism.

“The most important factor in this last third of my life has been the cooperation and love of my wife, Faye, without whom I could never have reached these really golden years.”