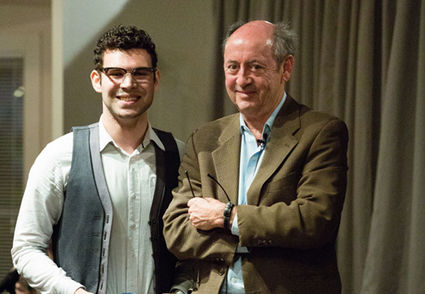 In honor of April as National Poetry Month, the Winter Park Institute at Rollins College and Collins recently hosted an event for local high school students titled A Poetry Conversation. Moderated by Collins, the event featured a poetry panel, consisting of four local high school students and two Rollins students, which discussed poetry and its applications in the modern world.

“I’ve always said that high school is where poetry goes to die,” said Collins, Winter Park Institute Distinguished Fellow and U.S. Poet Laureate (2001-2003). “But with discussions like these about this art form’s significance, we’re keeping it alive.”

Collins has been on the forefront of making poetry relevant to young people by authoring his book “Poetry 180” for American high school students, which highlights one poem a day to expose young people to new voices in contemporary poetry.

As part of the event, Central Florida high school students were invited to submit a poem for review by Collins. More than 90 entries from 14 public and private high schools in Orange and Seminole Counties were submitted.

“I was honored to win this award, but just as honored to have Billy Collins even read my poem,” said Schulman, who is a senior in Seminole High School’s international baccalaureate program and plans to attend New College. “I hope to major in philosophy, which is the questioning of life. And I consider the poetry the explanation in life—so they both complement each other.”

“Billy Collins once said that poets used to hang out in cafés, but now you will find most of them at institutions of higher learning,” said Gail Sinclair, executive director of the Winter Park Institute and former English professor and longtime teacher at Boone High School. “We couldn’t be happier that he chose Rollins and the Central Florida community as a place ‘to hang out.’”

Collins’ latest book “Aimless Love:  New and Collected Poems” will be published in the fall, and he will read from that collection in November as part of Winter Park Institute programming.

Schulman, who taught seventh grade ethics and philosophy at Temple Shir Shalom for the last three years, is a three-year member of International Thespians. He won Critics’ Choice and four Best in Shows this year at the District 3 Thespian Festival and a Best in Show at the Florida State Thespian Competition.

Launched in 2008, the Winter Park Institute at Rollins College is a center for intellectual engagement through public lectures, readings, symposiums, seminars, master classes, interviews and special-interest sessions. The Winter Park Institute features discussions between Rollins College, the surrounding community and thought leaders from a broad spectrum of disciplines, including poet laureates and Pulitzer Prize-winning historians. The programs are free and open to the public. For more information on upcoming speakers, visit http://www.WinterParkInstitute.org or call 407-691-1995.

I have always believed in height. In the tallness of things. In the great love

that can occupy all spaces, even those too large for our hands to grasp or lips to touch.

the peak of Mount Everest just waiting to be rediscovered again,

and smoke stacks and their billowing smoke that flavors the air of Chicago.

zoom past all the melting layers of atmosphere to reach five-hundred two billion feet tall,

I would be among the stars, with their nebulas, comets, cosmic pixie dusts, and God.

I extend my hand to whatever higher being or higher purpose would reach back to shake it. Standing in the Frigidaire space, waiting for some God to mirror the embrace.

And then the sun comes up over the universe. I stretch out. Grab it. Take in its warmth.

from a hot glue gun, amidst a production of a solar system diorama due yesterday.

I throw the sun just as I had my dollar-store high-bounce ball dozens of times before.

The shift in the sun’s radically new position alters our time continuum,

where now, I am Skywalker, Vonnegut, Quasimodo and Samuel Beckett

all wanting to screw over that beast we call time, and so I do.

But we can’t, so, we just look on as its grandeur unfurls and watch it, moving around us.