By Pamela Ruben
Special to the Heritage 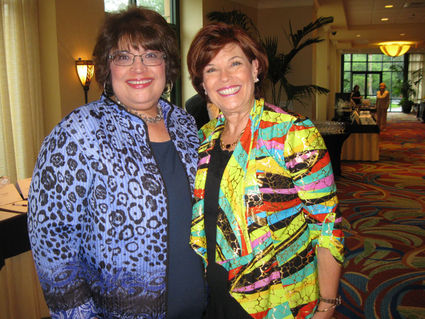 Supporters of the Jewish Pavilion proved to be more than “fair-weather friends” on Sunday, April 21, at the Marriott in Lake Mary when more than 250 attendees braved record downpours to attend their annual gala, honoring dedicated volunteers, Debbie Meitin and Cathy Swerdlow. It was an evening marked by moving speeches, combined with a sprinkling of tears, as Meitin, Swerdlow and a host of volunteers shared their heartwarming experiences of bringing companionship and Jewish connections to seniors in more than 50 nursing homes and assisted living facilities throughout Central Florida.

Ninety-two year-old Pavilion volunteer and Chambrel resident, Helen Tishman, delivered the opening remarks, showering both Meitin and Swerdlow with praise. Tishman stated, “It is my honor to introduce two extraordinary people, both of whom have given so much to the community, and particularly to the Jewish Pavilion,” Tishman said. “Both of these ladies make Judaism meaningful for those living in senior facilities.…They bring cheer and companionship to those who are alone or incapacitated. They perform Yiddishkite traditions for those away from family celebrations.”

A celebration of the honorees, along with Pavilion volunteers, continued throughout the evening, which included a full dinner and a silent auction. Gala co-chairwoman Suzan Shader graciously thanked the Gala committee, members of the Pavilion’s Friends board, as well as the Pavilion’s board of directors for their dedication and support.

Sunshine prevailed despite the weather and the cover of darkness, as Debbie Meitin and Cathy Swerdlow shared warm tales of volunteerism, family and community ties.

Meitin noted that she has been volunteering with the Jewish Pavilion since its inception, when it was founded by her sister-in-law, Sheryl Meitin with the help of Claire Chepenik in 2001. Meitin, who currently runs a weekly Shabbat service at Chambrel in Longwood, recounted an anecdote of a senior who joined in a Pavilion service at Chambrel after a long absence from the Jewish community. Meitin shared that when she looked up from her own prayers, the woman was joining in the service, with memories from the past guiding her along.

Meitin noted that her own mother was a former Chambrel resident. She stated, “I was very grateful when the Pavilion family stepped into my mother’s life, just before she passed away. It was hard to return after she was gone…but now I am back to the place where I love.” 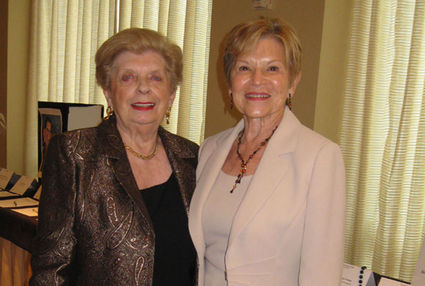 Like Debbie Meitin, honoree Cathy Swerdlow was also brought into the Pavilion by a family member—her 11-year-old daughter, Deborah (now 24). Swerdlow shared her own heartwarming tale, “Deborah volunteered to lead services as part of her bat mitzvah project. It had been her dream to lead services at an assisted living center (where seniors could not get to shul independently). Following Deborah’s bat mitzvah she continued to lead services, as the seniors were counting on her. When Deborah left for college eight years later, I stepped into her shoes and inherited her position.”

Today, more than 75 seniors at Chambrel count on Meitin and Swerdlow to preside over Shabbat as well as holiday services.

Nancy Ludin, Pavilion executive director concluded, “We are grateful to Debbie and Cathy for connecting with Jewish seniors, week after week, year after year. I would also like to take this opportunity to show gratitude to our Gala co-chairs, Suzan Shader and Susie Stone, as well as our Gala committee and our volunteers who were instrumental in tonight’s wonderful event. Thanks to everyone who came out to support the elderly in the Central Florida Community, come rain or shine.”