Ukrainian Jews worry that Svoboda party will bring anti-Semitism back 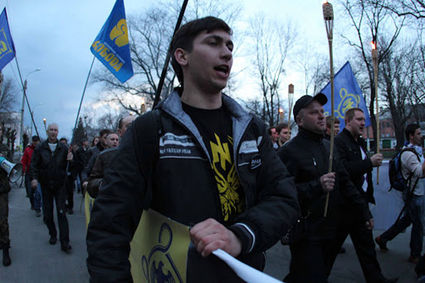 Svoboda supporters attending a party rally in western Ukraine in 2012.

At the appointed moment, they remove their windbreakers to reveal white T-shirts emblazoned with the words “Beat the kikes.” Their jackets carry the name of Svoboda, the ultranationalist Ukrainian political party.

A small riot quickly ensues. Angry protestors rip at the T-shirts, but the Svoboda-labeled men give as good as they get. One of the men beats Victor Smal, a lawyer and human rights activist, so savagely that he is rendered barely recognizable.

In the days after this April 6 melee, Svoboda denied that the provocateurs at the rally were their men. Yuriy Syrotiuk, a Svoboda parliamentarian, called the men criminals and complained that police were not responding to an act of incitement, Interfax reported. Some suggested the men were anti-Svoboda activists seeking to tarnish its image.

But denials notwithstanding, the incident has raised anxieties among Ukrainian Jews fearful of rising xenophobia and racially motivated violence they say is inspired by Svoboda, a party with neo-Nazi roots and a penchant for thuggery.

“Svoboda lifted the lid from the sewer of anti-Semitism in Ukraine and it’s spilling out,” said Joel Rubinfeld, co-chair of the European Jewish Parliament.

A U.S. State Department report this month singled out Ukraine, along with Hungary and Greece, as places of “concern” because of growing anti-Semitic parties. But open anti-Semitism is still rare in Ukraine. Tel Aviv University’s Kantor Center for the Study of Contemporary European Jewry documented just 15 cases of anti-Semitic violence in 2012. In France, the number was 200.

But the behavior of some Svoboda politicians risks changing that, some Ukrainian Jews worry.

“Svoboda is perhaps the biggest challenge facing Ukrainian Jewry today,” Ukrainian Jewish Committee President Oleksandr Feldman told JTA. “It has no structure and operates in a political vacuum and turmoil which allow it to run rampant.”

Svoboda’s unstructured nature also makes it difficult to pigeonhole. Party leader Oleh Tyahnybok has praised supporters for being the “worst fear of the Jewish-Russian mafia” and has called Jews “kikes.”

Yet the party also speaks admiringly of Israel, and Tyahnybok has made a point of advertising his meeting last December with Israel’s ambassador to Ukraine. Alexander Aronets, Svoboda’s press secretary, has praised Israel on his Facebook page as ”one of the most nationalistic countries in the world.”

Good relations with Israel may be desirable to Svoboda as a defense against accusations of anti-Semitism, a tactic employed by other European nationalist movements that have made overtures in Israel’s direction.

“They know anti-Semitism is preventing the good relations they seek,” said Moshe Azman, Ukraine’s Chabad-affiliated chief rabbi. “But Svoboda is not a uniform entity and I’m not sure the leaders control the rank and file.”

Feldman, an energetic businessman, lawmaker and founder of the Kyiv Interfaith Forum, says Svoboda has helped erode the shame associated with open expressions of anti-Semitism and other ethnic hatreds. His interfaith forum, which each year brings together hundreds of clerics from five faiths, was marred for the first time this year by a minor assault on a Muslim participant outside the conference.

“Svoboda is very frightening to Ukrainian Jews and other minorities because it is an ultra-Jobbik that evolved quickly,” Feldman said, referring to the anti-Semitic and Iran-friendly Hungarian party that also has enjoyed recent electoral success.

“We had hoped Svoboda would tone it down once it’s in parliament, but the opposite has happened,” said Vyacheslav Likhachev, a Ukrainian researcher with the Euro-Asian Jewish Congress. “The electoral gains have emboldened Svoboda lawmakers to incorporate thuggery as a modus operandi, a very dangerous development.”

One example came in February, when party member Igor Miroshnichenko shimmied up the towering statue of Vladimir Lenin in the town of Akhtyrka, threw a rope around the communist leader’s head, tied the other end to a truck and brought down the monument.

In December, the same man said Mila Kunis, a Ukrainian-American Jewish actress, was “no Ukrainian, but a kike.” Asked by a newspaper if Miroshnichenko could be prosecuted for making a racial insult, a Justice Ministry official said the word he used—“zhydovka,” a feminized version of kike—was permissible and part of the official vocabulary.

“This was another Svoboda success in poisoning the public sphere,” Likhachev says.

In February, Likhachev signed a letter along with several other Jewish Ukrainians asking the Jewish Agency for Israel to cancel plans to hold its board of governors meeting in Kiev in June. The letter, which several Jewish leaders dismissed as overblown, said that poor democratic standards and Svoboda’s ascent made Kiev an ill-suited choice.

“Svoboda are riffraff—nothing comparable to Jobbik, which has its own militia and coherent policy,” said Yaakov Bleich, a Ukrainian chief rabbi.

“Svoboda is troubling as a symptom of the main challenges facing Ukrainian Jewry: the economic recession and political uncertainty,” Bleich said. Still, he added, “because Svoboda is a mob, it’s less predictable than Jobbik. Svoboda’s leaders may be unable to control anti-Semitic displays.” 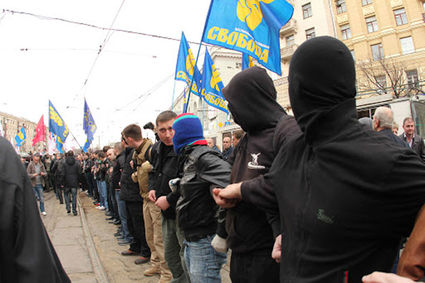 Despite the disagreements, many Jewish leaders seem to agree that Svoboda’s success owes more to frustration with the establishment than to its anti-Semitic statements. Likhachev pointed specifically to the discontent that emerged in the wake of the Orange Revolution, the protests following the 2004 election that brought former president Viktor Yushchenko to power on a platform of greater government accountability.

Bickering and disunity cost Yushchenko the presidency in 2010. He was succeeded by Viktor Yanukovych, the man whom protestors accused five years earlier of election fraud. That development strengthened Svoboda in two ways, Likhachev says.

“First, it radicalized disgruntled voters,” Likhachev says. “Second, the opposition allies learned they needed to stay united to win. So they are willing to overlook Svoboda’s anti-Semitism—to the detriment of Ukrainian society and its Jewish population.”