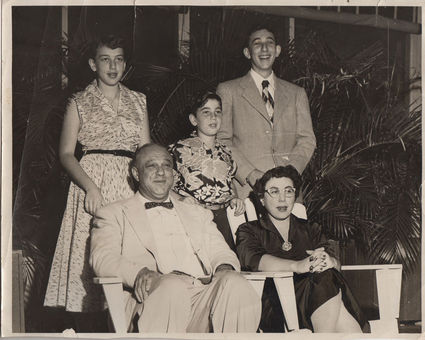 Photo is gift of Linda Morrell Spitzer, Lake Worth

Linda Morrell Spitzer’s bat mitzvah Nov. 16, 1951 was the first one at Congregation Ohev Shalom in Orlando

With this revolutionary act, she and her father initiated what would become the widespread American Jewish practice of bat mitzvah. To mark the 90th anniversary of Judith Kaplan’s bat mitzvah, the National Museum of American Jewish History and Moving Traditions collaborated to organize a traveling exhibition, Bat Mitzvah Comes of Age, featuring the remarkable story of how, in less than a century, individual girls, their parents and rabbis challenged and changed communal values and practice to institute this now widely observed Jewish ritual.

The stories of bat mitzvah “firsts,” as told in this exhibit range from secular to ultra-Orthodox and from small town to urban center. It includes the stories of everyday trendsetters and prominent women, such as Supreme Court Justice Elena Kagan, community leader Ruth Messinger and Facebook Chief Operating Officer Sheryl Sandberg, a Floridian, which illustrate the substantial impact of bat mitzvah on Jewish life and on each of the featured women. Following her bat mitzvah in St. Louis in 1950, Dee Radman Hermann responded, “I can do anything I want if I pursue it,” when asked about the lessons she learned in training for her special day.

“We felt this exhibit was a powerful portrayal of the role of Jewish women as major contributors of change to Jewish American traditions,” said Jo Ann Arnowitz, executive director of the Jewish Museum of Florida-FIU. “The ‘coming-of-age’ ritual is practiced differently throughout various cultures and ethnicities, but each serves as a rite of passage for solidifying a person’s place in their community. We look forward to sharing these women’s stories and those of Jewish women throughout Florida. I think everyone will be inspired by this beautiful and touching exhibit.”

This exhibition explores how the tradition of bat mitzvah has evolved and the related changes it sparked in Jewish education, practice and leadership, highlighting the critical role girls played in bringing equality to a patriarchal religion. The exhibit also serves as a catalyst to explore how rites of passage are celebrated in various cultures and religions.

As the Florida connection section of the exhibit will explain, the trends in Florida bat mitzvah ceremonies mirror those around the nation, starting with a handful of girls in the 1950s and increasing as the ritual grew in popularity over time.

Today, bat mitzvah celebrations are as common as bar mitzvah in the state, except in Orthodox communities. Though many Orthodox girls have some form of bat mitzvah ritual, the ceremonies are often held in alternative locations. Three such b’not mitzvah were held at the Jewish Museum of Florida-FIU, which is often rented for events in the community.

The museum will present a full array of public education programs to complement the themes of the exhibit, from panel discussions to performances, with multicultural components to attract diverse segments of the community.

The first bat mitzvah at Congregation Ohev Shalom in Orlando was Linda Morrell Spitzer on Nov. 16, 1951.

Linda’s father, Albert Morrell, came from Jewish parents, but he wasn’t brought up Jewish. He grew to love being a Jew and was always studying and learning to read Hebrew. He became the chairman of the Board of Education at Ohev Shalom. It was during one of his many trips to the Jewish Theological Seminary in New York to buy books for the synagogue, that he heard about the bat mitzvah ceremony. 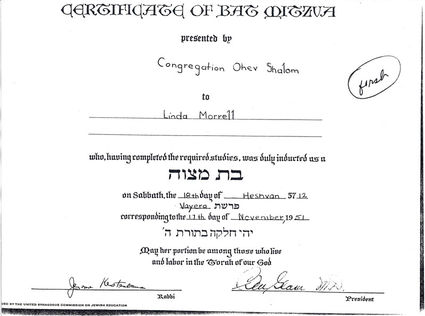 Photo is gift of Linda Morrell Spitzer, Lake Worth

Linda began Hebrew school in third grade. Hebrew school was twice a week until her bat mitzvah at age 12 1/2. She decided to forgo being a Brownie and later a Girl Scout because of her commitment to her Hebrew studies; both activities were at the same time.

Linda states: “I figured I went to Hebrew school all those years like the boys, I should get to have my day. I didn’t want to wait until I was 13. I heard girls could have it earlier—we were inventing this there anyway. The rabbi was OK with this, but girls were not allowed to read from the Torah.”

The Jewish Museum of Florida-FIU is the only museum dedicated to telling the story of 250 years of Florida Jewish heritage, arts and culture. The museum is housed in restored historic buildings, at 301 Washington Ave. on South Beach, that were once synagogues for Miami Beach’s first Jewish congregation. For more information: 305-672-5044 or http://www.jewishmuseum.com or visit us on Facebook @JewishMuseumofFlorida.