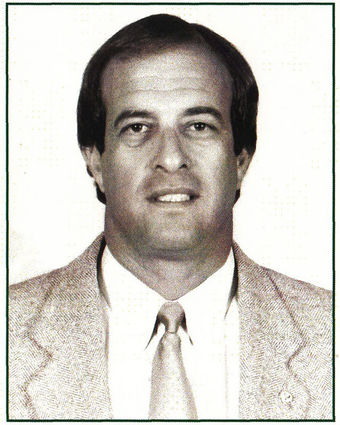 My son, Donald Soldinger, head football coach for Miami Southridge High school and then an assistant coach at the University of Miami from 1984-1988 and 1995-2005, was inducted April 11 into the university’s Hall of Fame, along with six others. My daughter, Vicki, and I were among 500 guests, including former inductees.

As he thanked his family for allowing him to be a football coach, I remembered the day he told me he wanted to be a player and a coach at age 9. My response as a Jewish mother was, “You can get hurt playing. Think of something else to be.”

Like a dutiful son, he explored other professions, including the FBI. After a year, he came to me and said, “All I want to do is coach football.” I told him to go ahead.

He thanked his wife, Phyllis, for being an ideal football wife along with their two sons, who enjoyed his career.

He went on to thank his first coach, Red Cameron, a Hall of Famer, for inspiring him to be a coach. Again, my thoughts went back to the day Red came to my door. He told me that if it weren’t for boys like Don, he would give up coaching in a minute. The parents drove him crazy. I thanked him and never told Don of the visit, and I didn’t know until his speech that Red was his inspiration. It was mutual admiration.

He played offense and defense in high school. He played with sprains, bruises, injuries, but when he had a concussion, I drew the line. He was supposed to be captain of the Thanksgiving Day game, and I refused to allow him to play. His coaches were upset, but it would have been folly to let him play. He was upset. I stuck to my guns.

His coaches told him if he got his degree they would put him to work when he graduated and they did.

He thanked all his coaches. They were models for him and he had followed their careers as a young boy and eventually worked with some of them.

He thanked his college players, who “put it on the line” for him allowing him to work with them with his “tough love.” School had to be attended. Effort had to be made, words had to be kept. They responded by setting records and 10 players made the NFL. He only accepted good character. He went to 14 bowl games with University of Miami.

He also made Florida history. His high school team was nominated “Team of the Nineties.” They were called “the Mighty Midgets.” Though small for football players, their motivation was high. They won two state championships and competed in four.

He told his players to visualize and dream. Then roll up your sleeves and get to work. Do whatever it takes to get you there.

He ended with a quote from Rudyard Kipling’s “Law of the Jungle.”

“Now this is the law of the jungle

As old and true as the sky.

The wolf that shall keep it may prosper

but the wolf that may break it must die.

The strength of the pack is the wolf

And the strength of the wolf is the pack.”

He was presented a beige jacket with a Hall of Fame logo and a beautiful ring.

He is called an “icon” in south Florida. Thank you for recognizing his ability.

Lesson: A child with a burning desire should be encouraged.