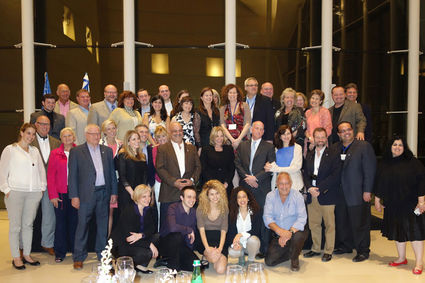 The dedication of the Amnon Lipkin-Shahak Conference Room at the Yitzhak Rabin Center in Tel Aviv in honor of the American Federation of Government Employees and J. David Cox, its national president, April 18. Joining Cox, second from left, are Lynne Cox, left; Barbara Easterling, president of the Alliance for Retired Americans; and Rabin’s daughter Dalia.

TEL AVIV (JTA)—The museum dedicated to the memory of Yitzhak Rabin raises nearly half its money from labor leaders.

It’s just not the labor you think.

Labor leaders say programs at the center, which celebrates the slain Labor Party prime minister who signed the 1993 Oslo Accords and promotes dialogue among Israel’s cultural groups, meshes with their core values.

Rabin’s “commitment to peace in not just Israel but the world is amazing,” said J. David Cox, national president of the American Federation of Government Employees. “He was criticized for his willingness to make compromises, but life is full of compromises. That’s how you arrive at a solution.”

American unions have supported Jewish statehood since before Israel’s establishment in 1948. At the time, Jews were heavily represented in the American labor movement, and Israel, with its socialist roots and collectivist spirit, was seen as a natural ally.

Today, organized labor, particularly in Europe, has overwhelmingly shifted its sympathies to the Palestinians, routinely voting in favor of boycotting Israeli goods or divesting from Israeli companies. But American union leaders say they remain committed to Israel, supportive of what they see as a perseverant Western country with an ethic of social justice.

“There wasn’t a nation here,” said John Coli, head of Chicago’s Teamsters Local 727, who was in Israel in April as part of a delegation hosted by the Rabin Center. “Now it’s totally different. [Tel Aviv] is a modern city. People have access to health care, to education. That’s what we want to build everywhere.”

Gerzon told JTA that the center has raised millions from unions by honoring national labor leaders in the United States. The leaders then call in favors from politicians and encourage businesses to open their checkbooks. The vast majority of contributions may come from these outside businesses.

Coli and Cox say that for them, part of Israel’s appeal stems from its strong labor union culture. According to Cox, Israel’s general union, the Histadrut, has more power than his AFGE.

“They get to bargain wages and benefits,” he said. “They have the ability to strike. We’ve got to get some worldwide solidarity with the union movement.” 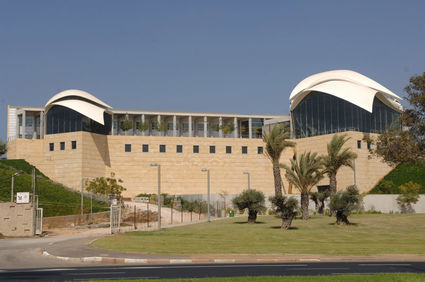 They Yitzhak Rabin Center in Tel Aviv, a museum dedicated to the memory and lifework of the slain Israeli prime minister.

Stuart Davidson, the chairman of the American Friends of the Yitzhak Rabin Center, said the visiting delegations hear from “the left and the right,” but movement leaders met with no members of the current center-right government. And despite Rabin’s legacy as a peacemaker, neither delegation spent significant time learning about the conflict or speaking with Palestinians.

Davidson said he wants to expand contacts with Palestinian workers. The ongoing conflict, he said, could endanger future U.S. union support for Israel.

“The failure to make progress toward a peaceful resolution is problematic to all of us,” Davidson said. “It’s troubling to us. The inability to address those issues will make it harder.”