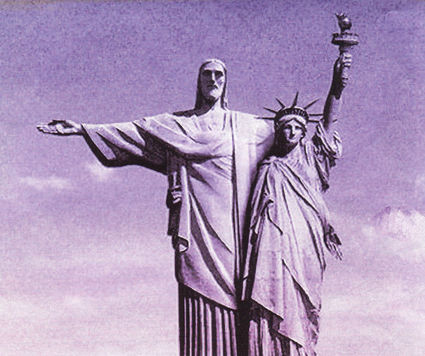 Jesus statue and Statue of Liberty

“Brasil, where hearts were entertaining June…”

Trust me… Brasil is spelled correctly. It is not spelled “Brazil.”

I have been to Brasil four times… to record my CDs, to perform shows, to do television, etc., so I know that is the correct spelling in Brasil.

My agent is a Brasileiro, born and raised in Sao Paulo. He is also a Jewish man, an entertainment lawyer and owner of his own recording company. His name is ROBERTO DRATCU.

Roberto has been here in Central Florida many times to work with me.

We also have Brasilian Jews living here. Among them, LUCILLA (and her American husband) STANLEY WEINROTH.

I bumped into Lucilla in my neighborhood supermarket recently and she gave me a most unusual photograph of the Jesus statue on Corcovado Mountain in Rio de Janeiro embracing Lady Liberty in New York Harbor.

(????) Remember, “Give me your tired, your poor,” the plaque on the famous statue, was written by a great Jewish lady, Emma Lazarus.

The photo is so unique in fact, that I pass it along to you.

I love Brasil and the Brasilian people and they seem to return the love.

I’ve visited many Brasilian landmarks that are most romantic and exciting like Rio’s Jesus statue atop Corcovado. I’m sure, when I ascended one day a few years ago, the statue whispered to me “landsman.”

(I could be mistaken.)

I even recorded a CD titled “Sugarloaf” in honor of Sugarloaf Mountain, also in Rio. (“Sugarloaf” is the title of a song I wrote).

I’ve relaxed and sunned on Rio’s famous Ipanema Beach… topless, of course, like most Brasilians.

Although considered “elderly,” I found going topless quite freeing. I didn’t even need a handbag!

I put my hotel key under my left breast… a camera and a sandwich under my right breast (nothing ever fell in the sand) … and if I couldn’t find a parking spot, the car went under too… only kidding!

I look forward to returning to Brasil to perform and record one day very soon. And when I do, I will contact all the loving people in Lucilla’s life for her.

It was all about congratulating his parents, MICHAEL and SHEILA KRAMER for 10 years of publishing their beautiful magazine, Lake Mary Life.

The Mayor of Lake Mary proclaimed April 2 Lake Mary Life Day in the city to recognize them for their contribution to Lake Mary, its schools and local businesses.

(I’m sure you recognize them in the photo.)

Michael is also a fabulous professional pianist and Ben is a renowned bassist. Both have performed jazz with me in New York City.

The couple, who have been recognized with awards from the Florida Commissioner of Education, The Seminole Association of School Administrators, Delta Kappa Gamma (International Society for Women Teachers), and the School Board of Seminole County, were also named small business of the year by the Seminole County Regional Chamber.

This wonderful couple, Michael and Sheila, have been married for 38 years. They have two children and two delightful grandchildren… and I just found out they have a third grandchild on the way!

(It couldn’t happen to nicer people!)

As I mentioned above, Ben Kramer sent me a YouTube video celebrating the magazine’s 10th anniversary. While watching it, I recognized two wonderful people I intended to write about anyway. (Such a coincidence!)

ANGIE and MARK ROMAGOSA were featured on one of the Lake Mary Life magazine covers by the Kramers.

Angie and Mark are the founders of The Sharing Center, a wonderful thrift store on U.S. 17/92. (I shopped there recently and purchased two swimsuits, two pairs of jeans and a stylish jacket all for only $11.68.

And they all fit great without even trying on!) My purchase benefitted poor and homeless folks in the area.

When I was there I met store manager, DEBRA LAUFFER and salesladies, LISA PUCKEY and RUTH WOLFF. (Ruth is a member of our Jewish community.) I also met lovely DORIS HOUCHINS, a saleslady and an author of the book “La Dolce Vita,” available at http://www.amazon.com.

Angie and Mark said of Lake Mary Life, “They put us on the map and gave us credibility.” Mark said about the cover he appeared on, “I wish I had lost 20 pounds before that.”

(A man after my own heart.)

Good people in a not so good world…

Even Dr. PHIL MCGRAW, noted television psychologist, wrote a book about our changing world and all the scams and scam artists out there. He wants us to be aware and to beware.

Case in point: Just yesterday I shopped at my favorite supermarket and while putting my groceries in the trunk of my car, I noticed two bags filled with items I did not purchase… nor was I charged for them. I immediately returned them to the store, which I assume any of us would do, but was shocked when I was so sincerely thanked by mangers and workers, not expecting such honesty! What has this world come to?

Another case in point: Our own PAMELA PORES went to the Bob Carr Performing Arts Centre recently and, when the valet parker with Lanier Parking Solutions, began to park her car, Pamela, noticing the threatening skies, gave him her umbrella. “Keep it,” she said. “I have more at home.”

Later, when she retrieved her vehicle, she noticed a note to her. It read:

Thank you for the umbrella! Your random act of kindness is a rarity in this day and age. You have made my day. Thanks again.”

It was signed MARK TAGAM, a wonderful young man who makes his employers proud indeed!

Still in a kind and gentler mode…

The National Federation of the Blind (NFB) needs help and donations. You can phone them at 410-659-9314 for further information. 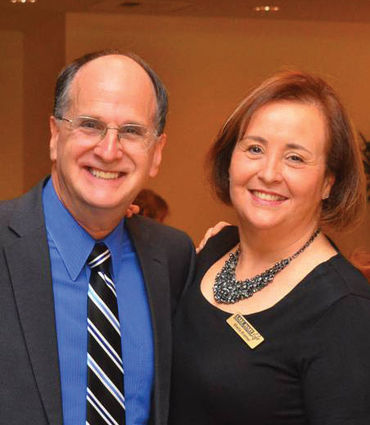 And a wonderful dog named Honey Dew needs a home. She is the sweetest, cutest and most loving young dog ever. She needs a forever home. I hope she is still with us and not euthanized. Call me if you are interested. I will check it out.

Hymie is sitting in the dentist’s chair and is just about to have some extensive and expensive cosmetic work carried out on his teeth.

Avrum, his dentist, smiles at him and says, “Just before I start, Hymie, I’d like to tell you how lucky you are coming to me for this work. When I’ve finished with you, you’ll be another man entirely.”

“I’m pleased to hear that, Avrum” says Hymie. “So don’t forget to send your invoice to this other man.”