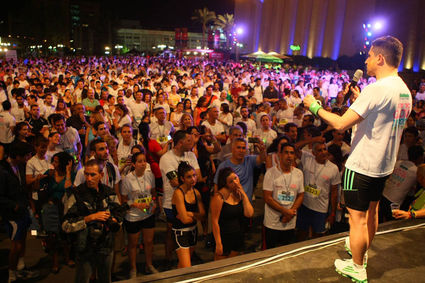 Beersheba was all aglow in Israel’s first Glow Run.

Shiny clothes, reflective signs and routes painted in ultra-colors brightened the nighttime sky of Beersheba, the capital of the Negev, on May 2 as the city hosted Israel’s first Glow Run, the newest trend in the running world scene. The event was a resounding success, bringing 5,400 runners from all over the country and 700 soldiers together in the desert city of Beersheba, an even bigger turnout than expected. Jews, Arabs, new immigrants, veteran Israelis, students, and others who share a love of running took to the streets for the first event of its kind in Israel, led by Beersheba Mayor Ruvik Danilovich.

“The stars of Beersheba were out,” said Jewish National Fund CEO Russell Robinson. “Beersheba is the capital of the Negev, and last night it was the light of the desert. Follow JNF as, together with its residents, we transform Beersheba into a shining example of partnership.”

Beersheba is the centerpiece of JNF’s Blueprint Negev campaign to transform the Negev. With JNF projects, including the Beersheba River Park, a 1,700-acre riverfront park with a sports arena, playgrounds, a 23-acre man-made lake, and 12,000-seat amphitheater; Abraham’s Well museum; Ben Gurion University of the Negev; and many bustling new neighborhoods; Beersheba has experienced a renaissance that made it the perfect place to host Israel’s first Glow Run.