He's having a Mel of a time 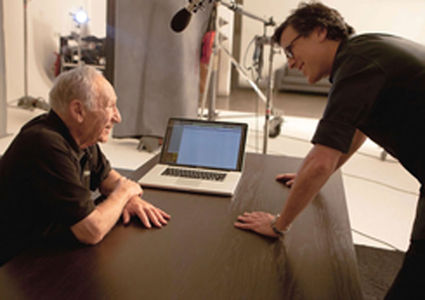 Mel Brooks, left, and Robert Trachtenberg on the set of ‘Mel Brooks: Make a Noise.’

PHILADELPHIA—The summer of 2013 is shaping up to be a pretty good one for the former Melvin James Kaminsky, better known as Mel Brooks. In addition to his son Max’s bestselling zombie apocalypse oral history, “World War Z,” being made into one of the year’s most anticipated blockbusters, Brooks will be given the 41st Life Achievement Award of the American Film Institute in June.

The recognition is only surprising in that it took so long; three of Brooks’ films are ranked in the AFI’s Top 100 Comedy Films: “Blazing Saddles,” 6; “The Producers,” 11; and “Young Frankenstein,” 13.

He’s also the subject of a PBS American Masters documentary, “Mel Brooks: Make a Noise” traces the career and life of the 86-year-old entertainer, who changed his name to avoid being confused for the Borscht Belt trumpet player Max Kaminsky. The film traces his path from childhood and his first gig, acting in a drama at the old Butler’s Lodge in the Catskills, to his work today as president of Brooksfilms.

Robert Trachtenberg, the writer/director/producer of the documentary, says one of the most poignant stories Brooks told about his youth—and one that explains a great deal about his Jewishness—didn’t make it into the documentary. He believes that Brooks, who is a self-described “societal Jew,” had no choice but to become a secular Jew as a child. “When he was growing up in Brooklyn,” Trachtenberg recounts, “his father was dead and his mother was raising him and his brothers. To go to temple, you had to pay. They didn’t have the money, so they didn’t go. He never got that training, that exposure” to Judaism. Still, he adds, “societally, it really is ingrained in him: the timing, the humor—it’s part of his DNA.”

Trachtenberg devoted a significant amount of time to Brooksfilms, which Brooks founded in the late 1970s so that he could produce a film, “Fatso,” that his wife, Anne Bancroft wanted to direct.

“A lot of people don’t know about Brooksfilms,” Trachtenberg says. “He was the producer of “The Fly,” “The Elephant Man,” “Frances”—he gave directors like David Cronenberg (“The Fly”) and David Lynch (“The Elephant Man”) their first big breaks.”

The focus on Brooks the producer ties into Trachtenberg’s goal to present Brooks to viewers in a new way—no small feat, considering the scope of his career and its success. Since first finding acclaim as one of the writers on Sid Caesar’s “Your Show of Shows” in the 1950s, Brooks went on to become one of only 14 people to have completed EGOT—winning an Emmy, Grammy, Oscar and Tony award.

Trachtenberg most effectively accomplishes this when the documentary focuses on Brooks’ personal life, like his time spent growing up in Brooklyn and his stint in the U.S. Army during World War II. Numerous interviews with longtime friends and colleagues are instrumental in getting past Brooks the comedy icon to Brooks the person. Particularly revealing is the story that Richard Benjamin tells of how Brooks got him the additional funding necessary to complete his much loved film, “My Favorite Year” (loosely based on a young Brooks’ encounter with a past-his-prime Errol Flynn); and Carl Reiner’s behind-the-scenes explanation of the origins of “The 2,000-Year-Old Man.” Reiner explains that the routine came about as a way to kill time while working together on other projects.

Trachtenberg, whose credits include documentaries on Gene Kelly, Cary Grant and George Cukor for American Masters, spent four months interviewing Brooks on a Hollywood soundstage. The interviews with Brooks show a man completely at ease with answering any question asked of him, even difficult ones about his commercial failures, most notably his later films like “Dracula: Dead and Loving It” and “Life Stinks.

“I thought it was important that he talk about films that didn’t work. I didn’t want to have an academic or a film critic critique his work,” Trachtenberg explains. “He’s smart enough and self-aware enough that he is capable of being analytical about them himself.”

Discounting those occasional flops, longtime Philadelphia Inquirer movie critic Carrie Rickey counts herself as a fan of Brooks’ work. In an email interview, Rickey brings to light what she feels makes Brooks not just a great comedian, but a great filmmaker, something that can be missed amid the laughter.

“What’s easy to overlook about Brooks is that, genre by genre, he parsed the movie language and demystified the conventions of Westerns, musicals, horror films and Hitchcock flicks,” she says. “I enjoy his movies on two levels: as parody and as movie criticism.”

When you’re receiving retrospective accolades from movie critics, there is no doubt that, as Brooks so succinctly put it in “History of the World Part I,” it’s good to be the king.

Greg Salisbury is arts & culture editor for the (Philadelphia) Jewish Exponent, from which this article was reprinted by permission. He can be reached at gsalisbury@jewishexponent.com.