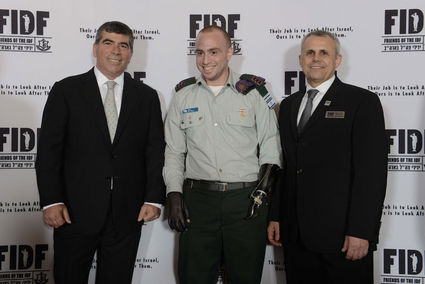 IDF captain Ziv Shilon (center), who has one prosthetic hand and is paralyzed in the other, poses with former IDF Chief of Staff Lt. Gen. (Res.) Gabi Ashkenazi (left) and Friends of the Israel Defense Forces National Director Maj. Gen. Yitzhak (Jerry) Gershon at FIDF’s national gala in New York this March.

CHICAGO—By the time Israel Defense Forces (IDF) Captain Ziv Shilon realized an explosive device had detonated near him while on patrol near the Gaza border, his left hand was torn off and his right hand was still hanging on by just a few pieces of skin. Ten surgeries and months of rehabilitation later, his left hand has been replaced by a hook prosthesis and his right hand is paralyzed.

That’s not going to stop him, he insists. Despite his injury, Shilon plans to enroll in law school and to later return to an army combat role.

“Defending the state of Israel is a need that still burns inside of me. It’s the noblest goal one can devote one’s life to, and I do not regret it for a moment… I really hope it will be possible,” he said in an interview with JNS.org.

In March, Shilon visited the U.S. and was honored at the Friends of the Israel Defense Forces (IDF) National New York Gala Dinner. He returned to the U.S. in mid-May, this time to Chicago, where FIDF supporters Morris Silverman and Lori Komisar arranged for him to receive tests at the Rehabilitation Institute of Chicago to see if he can be fitted for “a better prosthetic and a different type of rehabilitation,” Komisar told JNS.org.

“He is special, he’s just all goodness, it’s incredible,” Komisar said of Shilon.

By supporting FIDF, Komisar and Silverman help Israeli children and families who have lost a parent or relative in uniform, among other projects. “The FIDF really takes care of the human side of these kids being soldiers… Like every organization, it has its problems, but the impact is that dollars go much further than most places,” Komisar said.

A battalion commander in the Givati brigade, Shilon was already commanding 150 soldiers at the age of 25 by the time he was injured on Oct. 23, 2012. That day, heavy fog impaired the unit’s visibility as they scanned an area near Kibbutz Kissufim for explosives. Fearing sniper fire, he had left his forces behind him. The device detonated as he attempted to open a gate. Severely injured and scared of a possible kidnapping, like what had happened to Gilad Shalit, Shilon somehow managed to pick up his right hand, placed it on top of his barely hanging left hand, and ran back to his soldiers.

Despite having gone from commanding so many soldiers and doing a job for seven years that required great physical fitness to a young man fully dependent on his family, Shilon feels that his IDF service had a purpose. “I allowed citizens to be safer and for mothers to take their kids to kindergarten,” he said.

Making matters worse, Shilon’s mother has been battling cancer for six years. “My father is trying to coordinate between taking care of my mother and taking care of me,” and had to leave his job. But “I also have my girlfriend, who helps me a lot,” Shilon said.

“There is a black argument, ‘What is worse to lose, hands or legs?’ The main problem with two non-functioning hands is doing every day things like eating, showering, getting dressed. These are things that I am slowly more able to do on my own, but I need a lot of help daily,” he added.

During his visit to the Rehabilitation Institute of Chicago, Shilon was screened to see if he can be fitted with a better prosthetic that “would make him much more independent,” said Komisar, who first met Shilon at the FIDF New York gala. Later she went on a FIDF mission to Israel, and at Shabbat dinner she encountered Shilon again.

“I have a relationship with the Chicago Rehabilitation Institute and I just felt like they could help,” she said.

Therapists at the center also examined Shilon to see if his paralyzed arm could be rehabilitated. Komisar plans to work with Shilon to see when he can come back to Chicago for further evaluation and treatment.

Israel is a young country that does have its problems, Komisar said, but soldiers like Shilon are “the best and the brightest, so whatever we can do, for their families, for their needs, we’re happy to do.” Moreover, “I really believe that without Israel my children really don’t have a shot in this world with the amount of anti-Semitism out there, and these kids in Israel fight for every Jew in the whole world and they’re brave, wonderful,” she said.

“Right now there are prosthetic hands that can open, close and make a few finger movements,” Shilon said. A fully bionic hand like a real hand is not yet commercially viable, but “they told me they can maybe get me a hand that will be able to hold my rifle, and then I could go back to combat,” he said.

Shilon has been particularly saddened since April’s Boston Marathon bombings, in which victims also lost limbs. “All of the Jewish community and the people of Israel offer our condolences to the American public for this horrible attack in Boston. It’s something we’ve experienced on a daily basis and unfortunately the U.S. has entered these senseless events,” he said.

One way to try to adjust to reality without limbs is to “look to your left and… see that your friend has it tougher,” Shilon said. “Focus on the fact that there is still life out there and you still have the capability to help others, and through helping others, you will automatically feel you are also helping yourself to get back to a routine and organized life. It really requires mental strength; you cannot break and you cannot give up,” he said.

Once in a while, Shilon admitted, “It’s of course allowed and necessary to have a few small ups and downs.”

“That’s OK,” he said. “Climb one hill at a time. Don’t try to cross Mount Everest. It’s not possible to think that in three months you can go back to the way things were if you lost both your legs. You need to create small goals along the way for yourself, and go step by step until you can climb the entire Empire State Building.”