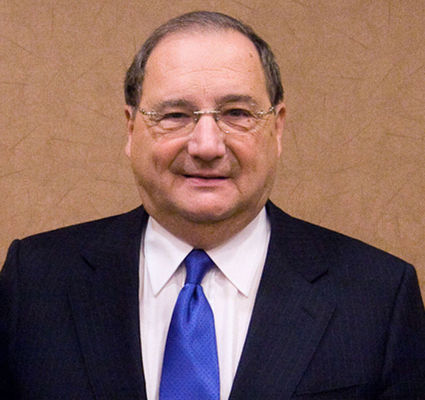 Abraham H. Foxman, national director of the Anti-Defamation League (ADL), on June 4 is releasing his new book ‘Viral Hate: Containing Its Spread on the Internet,’ co-written with attorney Christopher Wolf, a pioneer in Internet law. The book discusses how racists and anti-Semites are using the Internet to disseminate their hateful information and poses tough questions about the responsibility of the public to fight against this phenomenon in the U.S., whose laws highly protect free speech.

Foxman gave the following exclusive interview to JNS.org about the book.

JNS.org: Why did you decide to write about this topic now?

Foxman: “In the last 10 years we’ve seen a communication revolution in terms of the Internet changing the way we talk to each other. It had magnificent impact, but it also provided a super highway for communicating hate. That’s why we decided to do a book to analyze this and to alert people out there that, yes, it’s a wonderful addition to the way we communicate, but be aware that it’s also a very serious, threatening vehicle for bigots, racists and anti-Semites.”

Has hate speech online been identified and appropriately defined?

“We live in the United States, where the First Amendment and freedom of expression is of a high social, democratic and moral value. But now we’re finding a situation where this new freedom is destroying privacy, even destroying civility, so at what point does it cross the line?

“Look at the issue of bullying. Bullying is an expression of free speech, if you will, in the school yard, on the sports field, [but] …bullying is bigotry, [it is] ‘I don’t like you because you’re tall [or]… ‘I don’t like you because you’re Jewish.’ We’ve lived with it and almost tolerated it for many years. Now comes the Internet, and bullying becomes cyber-bullying, and now we’re seeing kids killing themselves. It’s one thing to manage bullying in a court yard, and it’s quite another if you’re being projected globally in this manner. In the book we’re trying to say that first and foremost we need to better understand [Internet hate’s] impact and take responsibility for it. A lot of people have responsibility: parents, schools, and probably more so the providers, the people who disseminate this stuff. Hopefully the book will open up a vibrant debate as to where responsibility lies before we rush to legislation or litigation.”

How does U.S. treat hate speech differently than other countries?

“The U.S. is unique in terms of our Constitution and First Amendment. I don’t think there’s any country in the world that has such a broad, encompassing protection of freedom of speech. In Europe there are laws all over the place, especially after the Second World War, against hate speech. There are laws against Holocaust denial, laws against racial epithets, etc. It creates a problem because if you cannot buy in Germany Mein Kampf, which is a hateful book, you can order it on the Internet from a U.S. website. Ironically, while they have laws against hatred and we do not, the level of intolerance in Europe is much higher. Our constitution says ‘you have a right to be a bigot,’ but also it says ‘you need to take responsibility for bigotry.’ Therefore what happens in our country, more than what happens globally, is that there are consequences for being a bigot. Mel Gibson at one point in his life was the number one celebrity in this country. He was exposed to be a bigot and paid a price. It wasn’t the laws that were used against him; it was social ostracizing. I think in terms of the Internet, that really is our first line of defense.”

In the book you discuss the fact that websites run by extremists are often ranked among the leading search results for a topic on Google, such as Jewwatch.com for the search result “Jew.” Has ADL ever tried to take up this issue, and what has been the response or result?

“What we found is that bigots operate 24-7. They’re out there all the time sending their messages of hate or defamation, and due to this [search engine] algorithm process, when you press the [search] button on ‘Jew,’ first you’re going to get anti-Jew [content] because the ‘Jew’ word is being bombarded by bigots rather than being embraced by friends and loving people. You have the same thing with Holocaust denial. There are more people out there propagating hate and denial than understanding, learning and being sympathetic to the lessons of the Holocaust. The Google and Yahoo people’s first answer [was] ‘Why don’t you tell your community to bombard Google with good stuff?’ and in fact about two years we did that. The Jewish community sent out word to ‘go out there and bombard with ‘I love Jews’ and nice stuff about Jews.’ It worked, but it’s crazy. You can’t expect to wake up in the morning and your job becomes to defend the Jewish people, the African-American people, the Hispanic people. So far what happens is that when there are egregious abuses, I would say seven out of 10 times, the major companies that run these websites do respond and do remove ‘the content.’ But there is another problem: That stuff never dies on the Internet. You can take it off but it finds its way back, and it always exists somewhere in the stratosphere.”

What can regular Internet users do to mitigate the prevalence of anti-Jewish material? 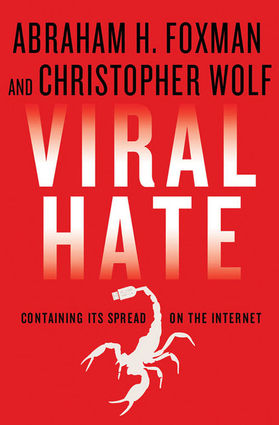 The cover of Viral Hate: Containing Its Spread on the Internet, a new book by ADL National Director Abraham Foxman covering the challenging intersection of online hate and free speech.

“They should be alert to it, complain to us [at ADL], to the providers, share with the legislators. First of all it’s awareness. Number two is to use the [online] vehicle for good speech. We can also ask the providers to put disclaimers on some of the stuff out there. A couple of months ago a [Facebook page] appeared about the third Intifada. The providers said, ‘This is like a conversation; it’s freedom of speech,’ and we said to them, ‘Intifada is not a conversation piece, it’s a call for violence, and therefore you should not permit it.’ We complained to Facebook, Facebook analyzed it and came back to us saying ‘you’re right,’ and they removed it.”

What are some unusual examples of online hate, or examples that people might easily recognize?

“There are some websites, one called Martin Luther King Jr. that masquerades [as a harmless website]. Innocently, you may want to find out what Martin Luther King said, what he was about, and you log on and all of a sudden you realize, or you may not realize, that it’s a white supremacist website. What many of the hate organizations did early on was to purchase and protect website domains. Many people in the beginning of the Internet weren’t aware of the value of this. If you buy a domain for the Holocaust Institute, it could become anything, but it becomes Holocaust denial. You have to be aware. Every great invention in our history had two sides to it. There was also a dark side, and we need to understand it. That’s basically what [my new] book says.”