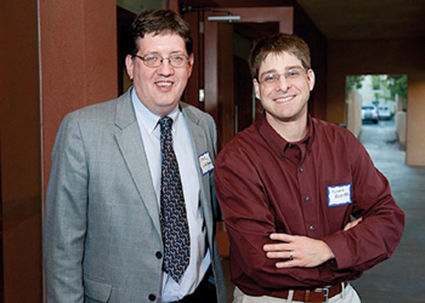 As a professor of Jewish religion, Steve Weitzman studies the lives of biblical figures from Abraham to Zipporah. Now, thanks to his collaboration with genetics researcher Noah Rosenberg, he may be able to examine their DNA as well.

The two Stanford University professors teamed up last semester to offer a course they called “From Generation to Generation: The Genetics of Jewish Populations.” The San Francisco-based Koret Foundation underwrote the one-unit, pass/no-pass class.

Over the course of the semester, Weitzman, Rosenberg and a weekly lineup of guest lecturers looked at a wide range of topics—from Jewish genetic diseases to assisted reproduction in Israel to the eugenics theories central to the Nazi ideology.

Through it all, the two discovered some common ground between the scholarly and scientific exploration of Jewish history.

“You can see genetic similarities among Jewish populations from different locations,” Rosenberg said in a recent interview. “So despite the fact that the populations migrated so many times, there is a common signature that connects [Jewish populations] in terms of genetic ancestry.”

Weitzman, the director of Stanford University’s Taube Center for Jewish Studies, said the Human Genome Project, which mapped in full the human genetic code, sparked the idea for the course. He began wondering: Could this revolutionary information play into his study of Jewish antiquity?

Then last year he met Rosenberg, an associate professor of biology and a newly hired researcher at a Stanford lab that explores evolutionary biology and human genetics.

“I was fascinated by his research,” Weitzman said, “and looking for ways for Jewish studies to connect to the life sciences. When I learned about Jewish origins and Jewish migration patterns, we thought about ways to do something together.”

Rosenberg looked at migration patterns of Jews, South Asian Indians, Native Americans and others. One key difference between Jews and other groups is the time scale: Jews have been migrating for a far shorter period.

“We’re interested in demography, migration and evolutionary history on the time scale of a few thousand years,” Rosenberg said. “The long tradition of scholarship in the humanities and social sciences suggests hypotheses about history we can test genetically.”

Based on available archeological sources, scientists cannot trace the Israelites any further back than 1200 BCE in terms of what Weitzman called “provable evidence.” However even that wall may eventually come down.

“One of the lectures [in the series] was by a pair of archeologists and a geneticist using genetic analysis to understand the ethnic profile of Israelites in the early period,” Weitzman added. “This is so new, they can only envision the research.”

Jewish genetics is a long-established field. Researchers have made strides in treating Jewish genetic diseases, such as Tay-Sachs. Today the incidence of Tay-Sachs is practically nonexistent thanks to pre-natal testing.

Is there such a thing as a Jewish gene? Rosenberg said no.

“It’s not that there are any particular genetic types found in Jews and nobody else,” he noted. “Certain types are found throughout the world but in different frequencies in different populations. One frequency may be 15 percent in Jews and 10 percent in everyone else. If you take enough of these markers that have slight differences in populations, you can distinguish an individual as a member of a group. We’re talking about extremely small genetic differences.”

The next step for the two professors is putting together a series of papers for an upcoming special issue of the journal Human Biology, an issue that Stanford is calling “the first interdisciplinary scholarly volume on Jewish genetics in the genome era.”

Rosenberg and Weitzman also want to continue building bridges between the fields of genetics and Jewish studies.

For a straight-up science guy like Rosenberg, working with Weitzman has been life altering.

“One thing that came clear to me over the course of the collaboration,” he said, “has been this deeper understanding of the connections between the cultural, historical and genealogical conceptions of Jewish identity as a whole.”