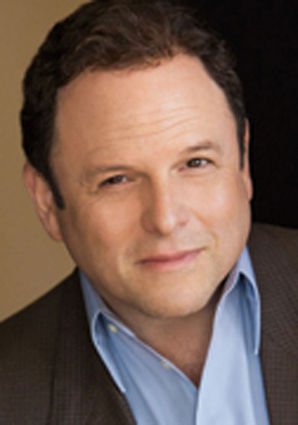 Taking classic ’60s-era Jewish comedy albums and turning them into a modern-day musical? That’s a pretty big matzah ball hanging out there.

Nothing actor Jason Alexander can’t handle. Best known now and forever as George Costanza from “Seinfeld,” he’s been a man of the theater throughout his long career.

Alexander directs “When You’re In Love, the Whole World is Jewish,” a new musical revue that was set for its Bay Area debut with a three-day run starting May 24 at San Francisco’s Marines’ Memorial Theatre.

He is not only directing the show, he also co-wrote sections of the book and composed some of the music. It was a labor of love for the star, who grew up in Livingston, N.J., in the mid-1960s listening to the LPs “You Don’t Have to Be Jewish” and “When You’re in Love, the Whole World is Jewish.”

A pastiche of Yiddish-inflected sketch comedy, the albums were the brainchild of Bob Booker and George Foster, who created them in the heyday of comedy albums, when comics like Bob Newhart sold millions of records. Booker and Foster also created the “First Family” albums, a pop culture phenomenon during the Kennedy era.

“We had all of them. These were standards,” Alexander recalls. “My parents were of the generation that sounded like the people on the album, so we had all of those—along with Alan Sherman and Jackie Mason. I remember them extremely well and fondly.”

Featuring popular Jewish comic actors of the day—such as Lou Jacobi, Betty Walker and Jack Gifford, the albums lovingly lampooned Jewish-American culture, all with a Lower East Side accent.

Only one problem: When producers Danny Gold and Billy Riback first approached Alexander, they presented him with something rather Seinfeldian.

A show about nothing.

“Old Jews telling jokes,” Alexander remembers. “I said, ‘how is it a show?’  What’s the premise? There was none.

“I didn’t want this group of disconnected sketches to just sit there. There had to be connective tissue. So we manufactured the faintest of story lines.”

That story involves a Jewish man who brings a non-Jewish girl home to meet the parents and his congregation. “The show is the congregation educating her into the ways of our people,” Alexander says. “It’s paper thin, but it gives us lovely bookends.”

Alexander and his partners were fortunate that Booker was able to help them. They worked together to shape the material.

“The one thing we promised [Booker] is we would change nothing without a reason,” Alexander says. “Nothing would be out of the feel of the original. So there’s no cursing, no vulgarity, no sexuality. It’s incredibly mild and sweet.”

The show had a trial run in Los Angeles earlier this year. It sold out and, according to Alexander, had audiences cheering. More than that, some in the seats called out the punch lines with the cast.

Alexander did not cast himself in the show, but he could have. His musical theater credits include a lengthy turn co-starring with Martin Short in the touring company of Mel Brooks’ “The Producers,” as well as a 1989 Tony Award-winning role in “Jerome Robbins’ Broadway.”

He also serves as artistic director of Reprise! Broadway’s Best, an L.A.-based musical theater company for which he has directed several shows.

But of course he will never shake the association with “Seinfeld,” the sitcom frequently cited as the best show in American television history.

Alexander is well aware of the show’s reputation, but he can’t swear by it. He says he never watched the show and to date has seen only about 30 of the 180 episodes that ran from 1989 to 1998.

“We didn’t quite fully understand how big the thing was while we were still doing it,” he says. “We knew about our ratings, our salaries, the magazine covers, but there wasn’t the attitude that we are all that and more. Jerry had the best description. He said we’re like the world’s biggest garage band. We’re in the garage making a lot of noise.”

Alexander hopes his new show will make some noise on the theater circuit. He knows it’s not for everyone, but he thinks it will especially hit Jewish audiences where it counts: in the kishkes.

“I love that you don’t have to be religious or know Jewish history to enjoy the show,” he says. “It celebrates the greatest thing about being Jewish: our ability to laugh both outwardly and inwardly at ourselves.”