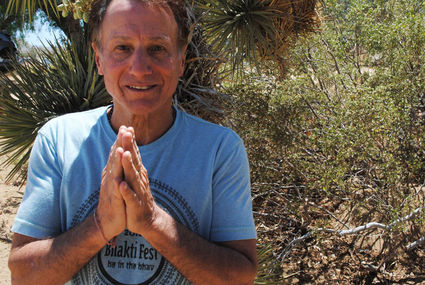 Sridhar Silberfein, raised in a Jewish family on Long Island, N.Y., is the founder of the Hindu yoga festival Bhakti Fest.

JOSHUA TREE, Calif. (JTA)—In 1968, only six years after founding the AEPi chapter at his Long Island University campus, Steven Silberfein took one of the thousand names of the Hindu god Vishnu and became Sridhar Silberfein.

A year later, the one-time Jewish fraternity brother escorted the Hindu teacher Swami Satchidananda to the stage at Woodstock to deliver an invocation in front of 500,000 flower children.

Surveying the crowd, Silberfein turned to the cotton-bearded swami and said, “Wouldn’t it be nice to get all these people chanting the names of God?”

“Forty years later we did that at Bhakti Fest,” said Silberfein, 73, referring to the Indian devotional music festival he founded in 2009.

Mounted twice a year in Joshua Tree, Calif., and now once a year in Madison, Wis., Bhakti Fest has become a fixture of the West Coast festival circuit. The May festival known as Shakti Fest, in honor of Hinduism’s divine feminine force, brought more than 1,500 yogis to the Mojave Desert two weeks ago for three days of chanting, breath work, yoga and a more-than-healthy dose of kale seaweed salad.

As blissed-out Californians floated around sipping coconut water and Vitamineral Green superfood, Silberfein, who has turned the festival’s operations over to his oldest daughter, Mukti Silberfein, schmoozed with artists with names like Durga Das and Arjun Baba.

Attended to by a bevy of young female assistants, Silberfein could easily be mistaken for a celebrity guru, though that’s exactly the impression he’d like to avoid.

“I’m just a regular guy,” said Silberfein, sitting in his air-conditioned RV. “I still bow down to the feet of people. I’m still scrubbing floors.”

Jews have long turned to Eastern philosophy to plug holes in their spiritual lives. Jewish Buddhists, or Jew-Bus, are perhaps the best-known example, brought to widespread attention in the best-selling “The Jew in the Lotus,” Roger Kamenetz’s 1994 account of a dialogue between rabbis and the Dalai Lama.

Less attention has been devoted to the phenomenon of Hin-Jews, who populate the ranks of America’s yogic elite in disproportionately large numbers. In addition to Silberfein and Ram Dass, who experimented with LSD at Harvard with Timothy Leary and is now revered as a master spiritual teacher, the biggest Western stars of the Indian call-and-response style of chanting known as kirtan are both New York-born Jews.

Silberfein credits his Austrian-Jewish mother with teaching him how to cook and clean, as well as the value of service. Growing up on New York’s suburban Long Island, Silberfein’s mother would take in Polish and Jamaican immigrant women and train them to clean houses, he recalled.

To his mother’s dismay, Silberfein took that service ethic and applied it to his gurus, or Hindu spiritual teachers. His first was Swami Muktananda, a charismatic teacher whom Silberfein met while studying with Rudi, a Brooklyn-born Jew who in the early 1960s taught a form of eye-gazing meditation out of a storefront in Greenwich Village.

“I had an overwhelming feeling of love when I saw these pictures,” he said.

In 1970, Muktananda asked Silberfein and Ram Dass, who would go on to publish the spiritual classic “Be Here Now,” to organize his first U.S. tour. Like Silberfein, Ram Dass—born Richard Alpert—also is Jewish, which led Muktananda to wonder why everyone he designated to his inner circle turned out to be Jewish.

“Someone said, ‘It’s because they’re the smartest guys around, they’re closely aligned with the Indian businessmen,’ ” Silberfein recalled.

At the time, Silberfein was a successful real estate broker. In 1978, he founded Desert Essence cosmetics and introduced tea tree oil to the Western market. But Silberfein attributes the affinity between Jews and Hindu teachers to something more numinous than the Jewish ability to negotiate.

“We were dissatisfied with the traditional Judaism we were being presented with,” Silberfein said. “We knew that the formless exists, that the form is not the real truth, but the Jews didn’t feel that.”

Since Muktananda’s death in 1982, Silberfein has been most closely aligned with Amma, the Indian holy woman known for giving hugs to followers who line up by the thousands for her embrace.

When Amma makes her yearly pilgrimage to California, Silberfein drives her from San Ramon, the Bay Area town that serves as the center of her U.S. operations, to Los Angeles, where for many years he hosted her at his Center for Spiritual Studies in Topanga Canyon. 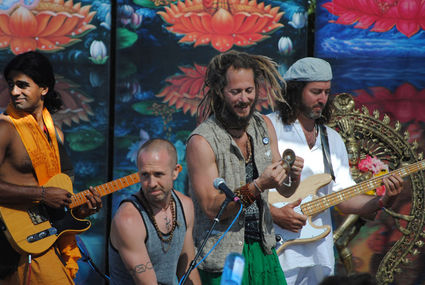 Govinddas and Radha perform May 18 on the main stage of the Shakti Fest in Joshua Tree, Calif.

Silberfein used to live in Topanga Canyon, a hippie enclave in the Santa Monica Mountains northwest of Los Angeles. But he gave up his seven-acre ranch there nearly a decade ago when a visiting spiritual teacher told him that the property’s Vastu—the Hindu equivalent of feng shui—would never allow him to have a good relationship with a woman.

Silberfein, who is unmarried, has had three wives and four children, the youngest being 14.

“I thought, ‘Why didn’t you tell me that before?’ ” Silberfein said.

As Silberfein’s mother lay dying, she told him he’d eventually get a “good kick in the ass” for having spent his life driving gurus around and not getting enough sleep.

When Silberfein told her he was going to see the mother—by which he meant Amma—she said, ‘I’m your mother. Don’t you ever call anybody else your mother.’ “