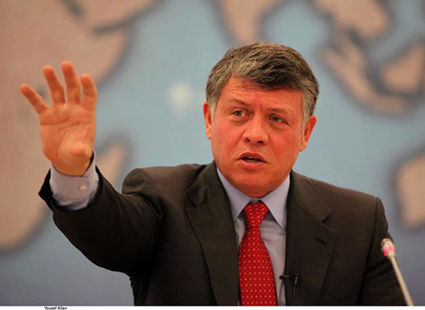 King Abdullah of Jordan. JNS.org examines whether Jordan’s monarchy will hold on, or become the next casualty of the Arab Spring.

Bordering the attention-grabbing countries of Israel, Syria, Iraq and Saudi Arabia, Jordan is sometimes overlooked by the media and by policy experts because of its peace with Israel, its close alliance with the United States, and its relatively liberal socio-economic system. Underneath this façade of stability, however, is a country plagued by a number of economic and social issues that threaten to plunge Jordan into the chaos of the “Arab Spring” upheavals.

“If there is to be another country, other than the ones that are already in play, and I include Yemen in that, and Bahrain… if there is to be a new country in play [in the “Arab Spring”], it is most likely to be Jordan,” Dr. Daniel Pipes, president and founder of the Middle East Forum, told JNS.org.

Jordan has long been a unique country in the Middle East, an aberration of sorts in a chaotic region and a holdover from a different era in the region’s history. Jordan was established by Great Britain post-World War I from the original Mandate of Palestine. In return for the support of Ali bin Hussein, the leader of the Hashemite tribe from the holy cities of Mecca and Medina, during the British-led Arab Revolt against the Ottoman Empire in World War I, the British installed his sons, Abdullah and Faisal, as kings of British-controlled Transjordan (later Jordan) and Iraq.

But when Jordan was formed in 1922, the country was largely desolate and populated by Bedouin or “East Bank” tribes. With the support of the British, King Abdullah formed a close alliance with those tribes that became the foundation of the modern state of Jordan.

According to Professor Asher Susser, a senior fellow at the Moshe Dayan Center for Middle Eastern Studies at Tel Aviv University, it is precisely this unique history that has given Jordan’s monarchy more ethnic stability and legitimacy than some of its neighbors like Syria, who have been ravaged by the Arab Spring.

“First of all the country in religion terms has a relatively homogenous population, unlike other neighboring countries like Syria, Iraq and Lebanon that are deeply divided on a sectarian basis,” Susser told JNS.org.

The Jordanian monarchy “has a certain level of legitimacy as descendants from the Prophet Mohammed,” Susser explained.

“Also, the idea of hereditary rule is something that is quite customary in the Middle East. These people have more legitimacy than military or republican regimes [like Syria and Egypt]. These factors, combined with the fact that Jordan is geopolitically central and close to a lot of big powers, [mean] there is a lot who want to not see Jordan fail,” Susser said.

Jordan’s Hashemite monarchy has been able to maintain power for nearly a century, while other governments in Egypt, Iraq and Syria have fallen numerous times. The stability has persisted despite the large influx of Palestinian refugees from various Arab-Israeli wars, including Jordan’s illegal occupation of the West Bank and east Jerusalem from 1948-1967.

Since then, the Palestinian situation has been a perplexing problem for Jordan’s monarchy. Unlike many other neighboring Arab countries, Jordan has granted citizenship and rights to its Palestinian community. But the Palestinian community has also long been treated as second-class citizens and viewed with suspicion by Jordan’s tribal community, who control many important state institutions, including the military and domestic security forces.

“From a long-term perspective, the Palestinians were the unsettled element in Jordan, and the tribes of the East Bank were the stalwart support for the monarchy. This was most evident in 1970, in Black September, when the Palestinians got close to overthrowing the monarchy,” Pipes told JNS.org.

Today, as in the past, tensions between Jordan’s native East Bank tribal community and the urban Palestinian community form the basis of Jordan’s problems. This has all been exacerbated by economic and political reforms undertaken by King Abdullah over the past decade, as well as the instability of the Arab Spring, which has plunged neighboring Syria into chaos, thereby flooding Jordan with nearly half a million Syrian refugees.

“[The] East Bank elite relied on the government for jobs and wealth, while the Palestinians have long been disenfranchised from this system. However, ironically, the Palestinians’ wealth is growing from private sector and the economic reforms. This has caused great resentment from East Bankers, many of whom feel King Abdullah lacks the legitimacy of his [late] father King Hussein. He is less trusted amongst East Bankers,” Susser said.

Rather than the Palestinian problem, Pipes cited a deterioration of support for the monarchy among the traditionally stalwart East Bank tribal community as one of the biggest challenges King Abdullah is facing.

“The problem, from the point of view of the monarchy, is now more the tribes than the Palestinians, who simply are not disruptive in the way they were in the past,” Pipes said.

The growing distrust of the loyal East Bank tribes, coupled with an emboldened Islamist Muslim Brotherhood opposition (which draws considerable support from the Palestinian community) that has played a major role in the revolutions in Tunisia, Egypt and Syria, presents one of the most difficult challenges the monarchy has ever faced.

When the Arab Spring began, instead of seeing it negatively, Jordan seized it “as an opportunity to institute reforms,” according to Fawaz Bilbeisi, director of the Jordan Economic and Commerce Bureau at the Jordanian Embassy to the United States.

“We established a commission to look at our situation and to discuss what are the value propositions of the country. Where do we want to see ourselves in 10 or 20 years?” Bilbeisi told JNS.org.

Nevertheless, Jordan faced widespread protests in November 2012 over cuts to fuel subsidies as part of a loan program from the International Monetary Fund (IMF). Many analysts at the time speculated that this would lead to popular revolt. But after a relatively benign government crackdown, by Middle East standards, the protests quickly dissipated.

“In the spirit of the Arab Spring, a lot of people took to the street and expressed their dismay. One of them is the economic reform, Jordan always been a country with an open economy and associated itself with the liberal camp, not the socialist camp. As part of this in the early 1990s we started to liberalize the country… We are steady on this track and are fully convinced that this the right way for the country,” Bilbeisi said.

Bilbeisi, however, noted that King Abdullah has established a commission to address the people’s concerns and make improvements.

“His Majesty has formed a commission to review the privatization process,” Bilbeisi said. “I think it is a process that is worth reviewing and looking back into. It doesn’t mean we are backtracking, just some correction and improvement for the future.”

The Muslim Brotherhood, meanwhile, boycotted Jordan’s most recent elections and continues to trouble the regime.

“They choose not to be part of our political process. At the end of the day, the government and His Majesty the king, has been part of an advanced political reform. We reformed over one-third of our constitution. He [King Abdullah] has reached out to them [the Muslim Brotherhood] many times to encourage them to be part of the political process, but they choose to go to the streets instead. Today they only get a few hundred people at their rallies,” Bilbeisi said.

Susser echoed a similar assessment, saying the initial appeal of the Muslim Brotherhood, which followed the first Arab Spring protests, has declined in Jordan due to the current chaos in Egypt and Syria.

“The Arab Spring has gone very sour and the appeal of the Muslim Brotherhood is not very high today. The situation in Egypt is hurting their image in Jordan and the bloodbath in Syria is not very appealing either for Jordanians,” Susser said.

Syrian President Bashar al-Assad and Jordan’s King Abdullah have long had a tenuous relationship. Abdullah, allied closely with the West and Sunni Gulf States, has been wary of Assad’s close relationship with Iran. But despite their personal disdain, tiny Jordan has accepted more than half a million Syrian refugees, who now equal nearly 10 percent of Jordan’s population.

“Jordan should be recognized by the fact that it has allowed in the Syrian refugees. It is a huge resource drain for the state and is an enormous undertaking,” Adam Coogle, Middle East researcher for Human Rights Watch who is based in Amman, told JNS.org.

Jordan, in fact, is barely managing the refugee situation, which Bilbeisi said has exacerbated the state’s budget deficit and driven up poverty and unemployment among Jordanians, who now must compete with Syrians for low-wage jobs.

“For now Jordanians are accepting the refugee situation because they are feel solidarity with their Syrian brothers. But we never know after a few months how Jordanians will deal with it as their numbers continue to increase,” Bilbeisi said.

Jordan has appealed to the United Nations to help assist the country in dealing with the Syrian humanitarian disaster.

“I don’t think people really know where things are headed at this point. There is a general idea that the security situation is declining, as well as the major Syrian refugee situation. There is also simmering popular discontent with the pace of reforms and whether or not there have been true reforms at all. In our assessment it is a mixed bag; some reforms have been good and some have not been good. Whether or not this would lead to popular revolt against the monarchy is still an open question,” Coogle said.

Jordan’s situation remains tenuous, but the ambitious reforms undertaken by King Abdullah to stay ahead of the Arab Spring have so far yielded positive results. Yet Jordan’s large Palestinian population and strained relations with the tribal base remain a continuous threat to the monarchy. While Israel, the U.S., and the rest of the world witness the situation in Syria with horror, Jordan is comparatively overlooked—but that might not be the case for long.

“Jordan suffers from the fact that it was created by Winston Churchill almost a century ago. It’s still not quite fully a country. Its neighbors, and indeed some of its residents, see it as not fully a country, and so there’s an element of insecurity that is always present there, and could be absorbed by someone else,” Pipes said.