By 6 degrees no Bacon staff
JTA 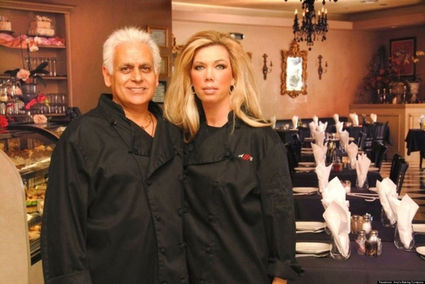 Samy and Amy Bouzaglo, owners of Amy’s Baking Company in Scottsdale, Ariz., had their problems on ‘Kitchen Nightmares’ and afterward.

NEW YORK (JTA)—An unsavory appearance on Gordon Ramsay’s “Kitchen Nightmares” turned out to be a PR nightmare for Samy Bouzaglo, the owner of Amy’s Baking Co. in Scottsdale, Ariz. But the Morocco-born Israeli appears to have bigger problems than sassing a reality show host and becoming entertainingly unhinged on Facebook (and then blaming the crazy posts on hackers).

Bouzaglo, who runs Amy’s with his wife, Amy, could be facing deportation—to Israel.

He was in U.S. Immigration and Customs Enforcement proceedings recently, but his lawyer wouldn’t comment on the case, telling the media it had nothing to do with the show. David Asser, a Scottsdale attorney, told the website azcentral two weeks ago that the case began two years ago.

Bouzaglo it seems served jail time before his arrival in the United States 13 years ago. And Amy, formerly known as Amanda Bossingham, had spent a year in prison for using another person’s Social Security number to apply for a $15,000 bank loan.

Amy’s had its “grand reopening” two seeks ago, post-”Kitchen Nightmares,” but it looks like the Bouzaglos’ time may have been better spent doing some market research: Tel Aviv could probably use another restaurant, albeit apparently subpar.

Facing tough competition, new contenders need to bring their A game—and “The X-Factor” did just that by signing Bar Refaeli as host. The Israeli supermodel will earn about $227,000 for looking good and talking to the competitors showing off their talent to the judges—famous musicians in Israel, none of whom are being paid as much as Refaeli, according to the Hollywood Reporter.

Promotion ads for the new show are running in Israel featuring the show creator’s, Simon Cowell.

Indie film directors during interviews inevitably bring up something they have learned from Woody Allen. So it was refreshing to hear from Vulture that the young Jewish filmmaker Zach Braff taught his veteran counterpart a thing or two about how the kids are raising money these days to fund their projects. Braff happens to be an expert on the subject, having raised nearly $3 million on Kickstarter for “Wish I Was Here,” his follow to “Garden State.”

Braff was in a meeting with Allen discussing a future project the same day the “Wish I Was Here” campaign launched, Braff said on Sirius XM’s “Unmasked with Ron Bennington,” and explained the concept of crowdsourcing to a curious Allen.

“A couple of days ago, his assistant emailed me about something, and I said to her, ‘PS: I’ll always remember that I’m the one that explained crowd-funding to Woody Allen,’ “ said Braff, who worked with Allen previously on “Manhattan Murder Mystery.”

“She wrote back, ‘PS: You explained it too well. He won’t stop talking about it.’ ”

Crystal back on TV

Looks like FX is going to be injecting some humor into its lineup. Billy Crystal will star in the network’s new half-hour series, “The Comedians,” according to The Hollywood Reporter. The veteran Jewish comedian will play a veteran (Jewish?) comedian forced to work with a younger, edgier comedian on a late-night comedy sketch show.

As if Crystal alone weren’t enough to give us faith the show will be funny, “The Comedians” has some other comedic heavyweights behind it. Producing and writing the series are Larry Charles of “Seinfeld” fame and Ben Wexler from “Community” and “Arrested Development.”

Crystal was a regular on “Saturday Night Live” for a season and on the ABC series “Soap.”

“The Comedians” is scheduled to air this summer. For FX, more humor’s not a bad idea after many seasons of the awesome yet dark series “Justified” or “Sons of Anarchy.”

Cynthia Nixon may not be Jewish, but the “Sex and the City” star tells 6nobacon that her kids are and she’s very connected to the Jewish community.

“My daughter was bat mitzvahed at B’nai Jeshurun on the Upper West Side, and my 10-year-old son will eventually be bar mitzvahed at the LGBT synagogue we go to now,” said Nixon, who has two children from a previous relationship with Danny Mozes and one with wife Christine Marinoni.

So when Rabbi Ellen Lippmann, her friend and the leader of a progressive Brooklyn synagogue, approached the Emmy- and Tony-winning actress about hosting a party for T’ruah: The Rabbinic Call for Human Rights, she didn’t hesitate to say yes.

“It’s an amazing organization,” Nixon said of T’ruah, a group of interdenominational rabbis who advocate for human rights. “Too often we think of religiosity as being the territory of the right wing. We in the left wing are spiritual, too, and we shouldn’t cede that territory.”

The bash in honor of the organization’s 10th anniversary will also feature a performance by Y-Love, the African-American Orthodox Jewish gay rapper.

Rabbis, Orthodox hip-hop artists – not exactly the kind of event you’d find Nixon’s “Sex and the City” character Miranda, or any of her fictional friends -- in a good way.