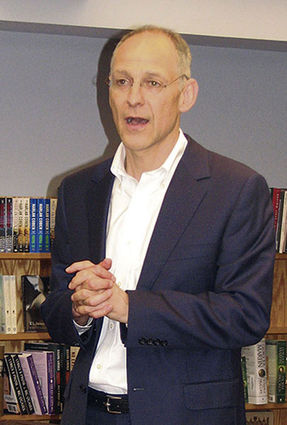 OK, let’s face it. One of the burning questions of the day, if you happen to be a Jewish parent, is: How do I get my kids to grow up like those Emanuel boys? You know: Ari, the wealthy L.A. talent agent who inspired an iconic sitcom character; Ezekiel, the bioethicist at The Hastings Center; and Rahm, former right-hand man to a president and now mayor of Chicago.

Hurry to your local independent bookstore. Ezekiel has provided a how-to guide. Sort of. Don’t get too excited. “The Brothers Emanuel: A Memoir of an American Family” offers plenty of family history and insight, but following the guide is going to require some reading between the lines. That became apparent at a recent talk he gave at Maplewood’s Words Bookstore, owned by his buddy, Jonah Zimiles. The pair met at Amherst College and have been friends ever since.

His talk focused on how “average” he and his brothers were, the three sons of a Jerusalem-born pediatrician dad and a psychiatric social worker mom. For one thing, youngest brother Ari had the “deadly combination” of ADD and dyslexia.

“People wrote him off,” said Zeke Emanuel, but those “people” didn’t include his mother. (Rule number one for creating an Emanuel brother: Have a strong mother.) The New York Times Magazine once described how Marsha Emanuel took her sons to cultural events every Sunday and insisted they came to dinner prepared for political conversation.

Then there was Rahm. “He was middling, and had not-so-great SATs,” according to Zeke. “When my eldest daughter took the SATs, she did really well. I suggested she call her uncles and tell them. She did and when she reached Uncle Rahm, he said, ‘Wow. That first score was like mine combined!’”

As for Zeke, the “smart” brother, he did “pretty well” but was “by no means first in the class” nor did he have “perfect scores” on standardized tests. He said he went to medical school because he had no plan B, and even took time off for an internship at The New Republic. “No one looked at us and said, ‘Those Emanuel boys are destined for success.’ We were just average.”

Well, maybe. When a physician in the crowd suggested he was selling himself short, another college buddy in the audience announced himself and revealed that Zeke “was one of the most brilliant students at Amherst,” and, moreover, he was modest even then.

Emanuel wasn’t shy about discussing the ways in which religion was integrated into their lives. Their father, Benjamin, born in British Mandate Palestine, eventually came to the United States for his medical residency after attending medical school in France.

(Rule two: Have a brilliant, risk-taking dad who enters medical school in France despite knowing no French.)

Benjamin settled in Chicago and married. Although they did belong to a Conservative synagogue, the Emanuels were not a religious family. The children were, however, raised to be Zionists. “Israel was much more important than being Jewish,” said Emanuel. “My father did not have a spiritual bone in his body. He was Israeli! He was interested in people. He was endlessly fascinated with people. But the big philosophical questions were of no interest to him.”

As teenagers, the boys spent unstructured summers in Israel. “We weren’t really a camp or activities kind of family. We spent all day on the beach or playing soccer,” he said. The brothers “slept in the same room. We only had each other, so it was great for bonding.”

(Rule three: No helicopter parenting. Give children opportunities for being bored and making their own fun.)

When it came time for his bar mitzvah, Emanuel said he “rebelled”—but not against Judaism; rather, he disliked the required rote memorization with little understanding. His parents agreed to hire a tutor named Danny Siegel, a poet, educator and well-known champion of grassroots tzedaka. The two studied every day before Zeke’s swim practice.

(Rule four: Teach to the child’s strength, even if that means waking up before dawn.)

Today he keeps kosher and belongs not to a synagogue, but to a rabbi-less minyan. “Hierarchy is not something that was ever good for us,” he quipped. But he offers his own conundrum. While religion plays a big role in his life, he said, “I’m a practicing atheist. I don’t believe in God, I just do all the practices. That creates a lot of problems for other people, but not for me.”

And his children? Of his three daughters, two are strictly kosher and shomer Shabbat.

So Jewish parents, take heart. Ezekiel Emanuel’s message isn’t so different from what generations of Jewish mothers have told their sons and daughters: “One part hard work—there was plenty of that; lots of energy—we got that from our dad; and persistence.”

And be prepared for disappointment.

“My mother wanted a doctor,” said Emanuel. “Instead she got a bioethicist!”