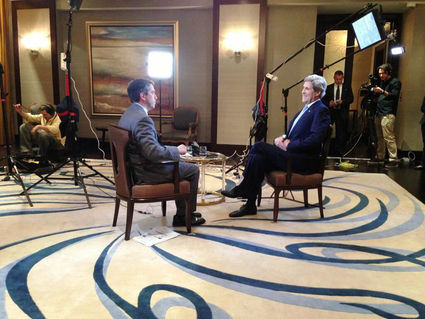 Fox News correspondent James Rosen, shown here interviewing Secretary of State John Kerry on March 5 was subject to a subpoena based on the same statute in the Espionage Act used to indict two former AIPAC staffers in 2005.

In fact, the law is even older, first drafted in 1917, at a time when secret orders were conveyed by telegraph and semaphore codes were bound in pocket-sized books weighted with lead so they could be thrown overboard at the approach of the enemy. The era also was the beginning of the Red Scare, the belief that the socialist revolution in Europe soon would infect the United States.

Communications since then have evolved quite a bit. Yet the law’s most controversial statute—targeting those who receive defense information, including reporters and lobbyists—persists.

Recently it formed the basis for a warrant used by the FBI to monitor the email and phone records of James Rosen, a Fox News reporter at the center of an investigation into government leaks. The disclosure of the investigation has embroiled the Obama administration in controversy over what looks to some like an attempt to criminalize journalism.

“Rosen was not charged with any crime, but it is unprecedented for the government, in an official court document, to accuse a reporter of breaking the law for conducting the routine business of reporting on government secrets,” wrote Ryan Lizza, The New Yorker’s Washington correspondent.

The controversial statute also was at the heart of a case several years ago targeting two former lobbyists for the American Israel Public Affairs Committee, or AIPAC. The case eventually was dropped.

The statute, known as 793(e), has been vexing reporters and lawyers for decades and was updated by Congress in 1950 over a veto by President Harry Truman. The statute criminalizes the “willful” retention of “unauthorized” national defense information and the failure to return such information to the government.

In a definitive 1973 analysis of the Espionage Act for the Columbia Law Review, U.S. Constitution experts Harold Edgar and Benno Schmidt said that language poses “the greatest threat to the acquisition and publication of defense information by reporters and newspapers.”

“If these statutes mean what they seem to say and are constitutional,” they wrote, “public speech in this country since World War II has been rife with criminality.”

Nevertheless, despite its vagueness and reputation among constitutional lawyers as unenforceable, successive administrations at times have considered 793(e) as a tool to prevent leaks. But public officials have been divided on the question of whether it is an appropriate application of the law.

John Ashcroft, the attorney general under President George W. Bush, cited the statute as one he was prepared to use to stop leaks in testimony he was set to deliver before a congressional committee days before Sept. 11, 2001. The testimony was delayed and ultimately never happened.

Patrick Fitzgerald, the prosecutor who successfully convicted vice presidential aid Lewis “Scooter” Libby on perjury charges, said at the time of Libby’s indictment in 2005 that he contemplated using the Espionage Act but ultimately decided against it. He said the law’s broad application might not be appropriate in an American context.

Two cases in which the government successfully invoked 793(e) involved actual documents and not just oral exchanges. In both cases, the accused were government employees charged under additional separate statutes targeting leaking and espionage.

One of the major problems with the statute identified by Edgar and Schmidt would emerge in the government’s 2005-09 case against Steve Rosen and Keith Weissman, the former AIPAC lobbyists: What does it mean to willfully retain unauthorized information?

Edgar and Schmidt noted that the provision would seem to be criminalizing memory. More than three decades later, the judge trying the AIPAC case, T.S. Ellis III, asked the same question.

“What are they supposed to do?” he asked prosecutors, referring to Weissman and Rosen. “Have a lobotomy?”

The AIPAC case stemmed from a conversation Weissman had in 2004 with a midlevel Pentagon analyst, Larry Franklin, in a suburban shopping mall. Franklin informed Weissman that Iran was set to target Israeli and American targets in northern Iraq. The information was false; the FBI was using Franklin in a sting operation to net the AIPAC staffers.

Weissman relayed the information to Rosen, and together they relayed it to journalists, their colleagues at AIPAC and Israeli diplomats. They also attempted to convey it to the Bush White House.

Throughout pretrial hearings in the case, prosecutors repeatedly assured the court that they did not anticipate its use against journalists; Weissman and Rosen, they argued, were in a separate category as lobbyists. Defense lawyers noted that the First Amendment extended its protections to lobbyists as well.

Viet Dinh, an assistant deputy attorney general under George W. Bush, wrote in an amicus brief in the AIPAC case—filed in 2006, after he had left the Department of Justice—that 793(e) posed constitutional challenges. Allowing its use “would only serve to chill the use of truthful information on matters of extreme public concern to advance the public’s interest in the foreign policy process,” Dinh wrote.

Mindful of such constitutional hazards, Ellis set the bar high for conviction: The government would have to persuade a jury that Rosen and Weissman not only “retained” unauthorized information, but that they knew that doing so would harm the United States.

On May 1, 2009, the prosecution dismissed the charges, saying it was in “the public interest.”