Syrian refugees quietly treated by Israel while U.N. makes latest 'parody of itself' 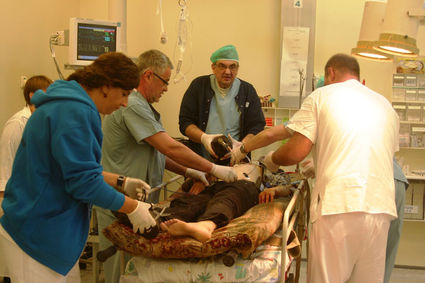 A Syrian refugee is treated at Ziv Medical Center in Israel’s northern city of Safed.

The script reads like this: Israel treats wounded Syrian refugees in its own hospitals. Syria produces a report alleging an “acute shortage of primary and tertiary health care services” in the Golan Heights region. A United Nations agency, citing the Syrian report rather than acknowledging Israel’s actions, condemns Israel.

On the surface, this storyline contains several plot twists, but it is not surprising for Dr. Daniel Pipes, president and founder of the Middle East Forum.

“The U.N. is a parody of itself,” Pipes told JNS.org, noting that a Libyan was once elected the chair of the Human Rights Commission, among other elected representatives from countries with questionable human rights records over the years.

Recently, the Ziv Medical Center in Israel’s northern city of Safed treated and released 14 Syrian refugees, most of whom “arrived with gU.N. shot wounds in the stomach and in the lower limbs,” the hospital’s communications advisor, Yael Shavit, told JNS.org.

But while Israel quietly treated Syrian refugees, the annual assembly of the U.N.’s World Health Organization (WHO) on May 21 adopted a resolution—based on Syrian, Palestinian, and WHO reports—condemning the “deterioration of the health conditions of the Syrian population in the occupied Golan as a result of the suppressive practices of the Israeli occupation.”

Under the rubric of “Health Conditions in the Occupied Palestinian Territory, Including East Jerusalem, and in the Occupied Syrian Golan,” the WHO assembly was presented with four reports scrutinizing Israel, including the report from Syria. The WHO resolution, meanwhile, ignored the thousands of civilians being slaughtered in Syria’s ongoing civil war, according to U.N. Watch, a Geneva-based NGO monitoring the UN.

Less publicized than the WHO assembly resolution, however, were the 14 Syrian refugees who received treatment at Israel’s Ziv Medical Center.

“There were a few that needed very complicated orthopedic surgeries,” Shavit told JNS.org. “There were two that spent a long time in emergency care, a lot of surgery and orthopedics, because the shooting was probably close, I don’t know how they were injured, but there were a lot of bones [that were hit].”

Daniel Pipes said the WHO assembly resolution was “so self-evidently absurd, ritualistic, meaningless.” He said it is noteworthy, however, that only three countries besides Israel, the U.S., Australia and Canada voted against the resolution.

“This is not new, it’s just dismaying to see these sophisticated, liberal, modern, western countries like Italy, France, New Zealand, not even take the trouble to vote against it,” Pipes said. “It’s a sign of their moral weakness.”

The Syrian report that contributed to the WHO resolution accused Israel of torturing Arab detainees and burying nuclear waste in the Golan.

“It’s a futility by a [Syrian] regime that might well be gone any day... They just make things up, it has no bearing in reality,” Pipes said.

“This is a regime that’s fighting for its life,” Pipes added, calling the Syrian report an indication of “weakness on the part of Syria and strength on the part of Israel.”

The government of Israel said in a statement that the “position of the State of Israel has always been that a politically motivated debate and resolution... has no place on the agenda of the World Health Assembly…The State of Israel regards the continuous World Health Assembly’s debate on the ‘health conditions in the occupied Syrian Golan’ as an absurd example of the way the assembly’s agenda is cynically abused, World Health Organization’s limited resources squandered, and will not cooperate with it.”

Another report used in the WHO assembly resolution, authored by the U.N. Relief and Works Agency for Palestine Refugees in the Near East stated, “The Palestinian health situation faces many challenges under the oppressive Israeli occupation of Palestinian land,” even though all residents of Israel have the legal right to medical care. Additionally, all residents of the Golan Heights enjoy “high-quality medical services equal to all other residents of Israel,” the Israeli statement said.

In fact, 400 Gaza residents were treated at the Rambam Medical Center in Haifa last year, according to a report by the Jerusalem Post. In 2012, WHO itself had reported that Israel granted immediate approval to 91.5 percent of Gaza resident applications for medical care in Israel. About 7 percent more were given approval after a security check. More than 200,0000 Arabs received medical treatment inside Israel in 2012.

“I’ve come here to learn from your excellent health system,” said WHO Director General Margaret Chan while visiting Gaza children being treated at Tel Aviv’s Dana-Dwek Children’s Hospital, according to the Jerusalem Post.

Among the Syrian refugees recently treated at Ziv Medical Center, two patients with head wounds were sent for treatment to another Israeli hospital, but since the Ziv center is closest to the border with Syria, the Israel Defense Forces approves the transfer of many of the refugees there, Shavit told JNS.org.

“The longest time one of these patients spent at our hospital was two and a half months,” Shavit said.

Reports surfaced this March that the IDF has also set up a new field hospital on the border with Syria to treat wounded refugees.

“A doctor who receives a wounded patient, he treats him [or] her as a person and not as an identity,” Shavit said.