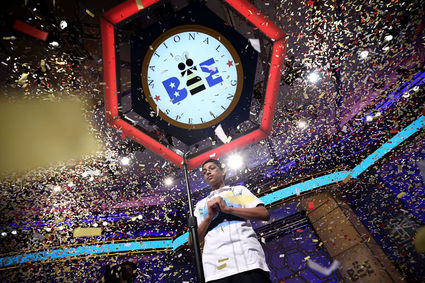 How do you spell knaidel?

Arvind Mahankali, 13, of Bayside Hills, N.Y., won the 2013 Scripps National Spelling Bee on May 30 by spelling the word “knaidel,” a traditional Jewish dumpling. Mahankali beat out 10 other finalists in the competition, held in Oxon Hill, Md.

He won $30,000 in cash, a $2,500 U.S. savings bond from Merriam-Webster and $2,000 worth of reference works from Encyclopedia Britannica, as well as a shiny engraved trophy and the title of “champion.”

German words have led Mahankali to his spelling bee demise for the past two years, when he twice placed third at the bee.

Vocabulary.com, which covered the bee, described knaidel as coming from “German-derived Yiddish.” It quoted Mahankali as telling ESPN, “the German curse has turned into the German blessing.”

The finals featured another word of Jewish origin. Hannah Citsay, a student at St. Anne Catholic School in Lancaster, Pa., correctly spelled “hesped,” the Hebrew word for eulogy, in the sixth round.

Despite correctly spelling “hesped,” Citsay was eliminated in a new portion of the contest, where contestants had to provide the definition of a word.

JERUSALEM (JTA)—Israeli Prime Minister Benjamin Netanyahu called for the repatriation of illegal migrants days after a government attorney said Israel has reached an agreement with unnamed counties to repatriate migrants from Sudan and Eritrea.

Netanyahu was presented Sunday with data that shows a continued decline in the number of infiltrators who have entered Israel illegally.

“The fence that we built in the south is achieving the result for which it was erected,” he said. “As opposed to the over 2,000 infiltrators who entered Israel exactly one year ago and dispersed to various cities, in May 2013 exactly two infiltrators crossed the border and were detained.

“Now we need to focus on repatriating the illegal infiltrators who are here, and we will meet this task as well.”

News of a third country willing to take Eritrean immigrants from Israel came during a Supreme Court hearing May 30 on a lawsuit against an amendment to an Israeli law that would allow migrants to be jailed for lengthy periods of time, according to reports in the Israeli media. Israel also is discussing with two other countries a deal to take in Sudanese migrants.

Israel cannot deport Eritrean nationals because they could be killed or imprisoned. Sudanese nationals are not deported because Israel does not have diplomatic relations with Sudan.

Under a law passed in Israel last year, Israel can jail illegal migrants for up to three years.

A fence along the border with Egypt constructed to keep out illegal infiltrators as well as terrorists was completed in January.

JERUSALEM (JTA)—An earthquake was felt in the southern Israeli town of Eilat.

The earthquake on Saturday night registered 4.9 on the Richter scale, according to the National Earthquake Information Center in the United States.

Its epicenter originated in the Sinai Peninsula but was felt in the tourist center of Eilat and in Cairo.

JERUSALEM (JTA)—A mass grave holding the remains of dozens of Arabs killed during Israel’s 1948 War of Independence was unearthed at a Muslim cemetery in Jaffa.

The discovery of the mass grave—six underground rooms with the skeletons of adults and children—was made last week during renovations to the cemetery, the French news agency AFP reported.

The bodies were placed in the existing crypts of several families and were not buried in accordance with Muslim tradition, according to reports.

AFP reported that the bodies were of people killed in the south of Jaffa, now part of the Tel Aviv municipality, in the final months of the 1948 war.

The appointment of Rami Hamdallah, president of an-Najah National University in Nablus, by P.A. President Mahmoud Abbas was announced Sunday.

Hamdallah has three weeks to form a government.

He succeeds Salam Fayyad, who resigned in mid-April but remained to lead a caretaker government until a new government was formed.

(JTA)—Israel’s Ministry of Religious Services for the first time will allow non-Orthodox rabbis to serve in communal positions with state-funded salaries.

The May 30 announcement of the intention to change policy follows a petition to the Israeli Supreme Court filed in January by the Reform and Conservative movements arguing that it was discriminatory for the state to employ only Orthodox rabbis in state-funded positions. In response to the petition, the ministry wrote that it was revamping its policies to permit communities to receive funding for rabbis of their choice.

The ruling represents a milestone victory for the Reform and Conservative movements, which long have chafed at their second-class treatment by the Israeli government.

BUENOS AIRES, Argentina (JTA)—Argentina will work with Iran to investigate the 1994 AMIA Jewish center bombing despite an indictment accusing Tehran of terrorist activity in South America, the Foreign Ministry in Buenos Aires said.

“We will continue to promote the legal way to find and prosecute those responsible for Argentina’s worst-ever terrorist attack,” according to an Argentina Foreign Ministry statement released over the weekend.

The AMIA bombing in Buenos Aires killed 85 and injured hundreds.

The Argentinian prosecutor in the AMIA case, Alberto Nisman, accused Iran in a 502-page indictment filed May 29 of building clandestine intelligence stations in South American countries from which to launch terror attacks.

Giltburg, 28, of Tel Aviv, was named the winner in the piano category early Sunday in Brussels for his “impeccable and unusually moving rendition of Sergei Rachmaninoff’s Piano Concerto No. 3,” the Belgian-Jewish magazine Joods Actueel reported.

The Moscow-born musician is the second Israeli to win the international competition, which began in 1951; Miriam Fried won in the violin category in 1971.

Giltburg won a cash prize of $32,450 from the competition’s fund and another $3,245 from the VRT broadcaster.

The six finalists were selected by a 14-person jury among 75 performers. In total, a record 283 candidates applied to compete.

At a ceremony laast Friday, a park in Turin was formally named the Simon Wiesenthal Garden in honor of the Holocaust survivor and Nazi hunter who died in 2005.

Also last week, a park in Bologna was named for Rabin, the Israeli prime minister who was assassinated in November 1995.

Local mayors, other officials and Jewish community representatives took part in the ceremonies in both cities.

Budapest to review naming of street after anti-Semite

(JTA)—Budapest Mayor Istvan Tarlos ordered a re-examination of the decision to name a street for an anti-Semitic author.

Tarlos spokeswoman Maria Szucs Ciuc told the news site FN24.hu on May 30 that the mayor had ordered a re-examination of the City Council’s decision to name a street after Cecile Tormay, a Hungarian writer who died in 1937. The World Jewish Congress and the Federation of Hungarian Jewish Communities, or Mazsihisz, protested the decision.

Under the Local Government Act, the mayor may reverse decisions deemed “offensive.”

Ronald Lauder, the WJC president, said in a statement that the decision to honor Tormay “puts into question the pledge given to the Jewish community that anti-Semitism will be fought vigorously by the Hungarian authorities.”

In a separate statement, Mazsihisz said Tormay had “inspired” many anti-Semitic thinkers and leaders in Hungary, including Miklos Horthy, the country’s pro-Nazi ruler during World War II, when 400,000 Hungarian Jews were murdered.

PARIS (JTA)—A French town where dozens of residents saved thousands of Jews from the Holocaust will open a museum to commemorate the rescuers’ actions.

The Memory of Chambon museum is scheduled to open on June 5 in Chambon-sur-Lignon, 70 miles south of Lyon in southern France, according to the French news agency AFP.

The museum will commemorate the actions of at least 35 residents who, according to the Yad Vashem Holocaust Memorial in Jerusalem, prevented French authorities under the pro-Nazi Vichy government from deporting and murdering approximately 5,000 Jews.

The rescue was initiated and led by the town’s pastor, Andre Trocme, and his wife, Magda. The couple and another 33 townspeople have been recognized as Righteous Among the Nations, a title conferred by Yad Vashem to non-Jews who risked their lives to save Jews during the Holocaust.

Trocme hid Jews in his parish and smuggled many others into neutral Switzerland.

According to Yad Vashem, the Vichy authorities became aware of his activities and cautioned him to cease. His response was: “These people came here for help and for shelter. I am their shepherd. A shepherd does not forsake his flock. ... I do not know what a Jew is. I know only human beings.”

Andre Trocme was arrested but released. His cousin, Daniel Trocme, died in the Buchenwald concentration camp, where he was sent for rescuing Jewish children in his capacity as director of a local children’s home.