With desalination, once unthinkable is possible in Israel 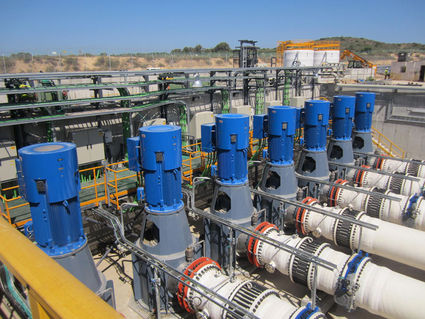 Water from the Mediterranean Sea rushes through pipes en route to being filtered for use across Israel in a process called desalination, which could soon account for 80 percent of the country’s potable water.

PALMACHIM, Israel (JTA)—As construction workers pass through sandy corridors between huge rectangular buildings at this desalination plant on Israel’s southern coastline, the sound of rushing water resonates from behind a concrete wall.

Drawn from deep in the Mediterranean Sea, the water has flowed through pipelines reaching almost 4,000 feet off of Israel’s coast and, once in Israeli soil, buried almost 50 feet underground. Now, it rushes down a tube sending it through a series of filters and purifiers. After 90 minutes, it will be ready to run through the faucets of Tel Aviv.

Set to begin operating later this month, Israel Desalination Enterprises’ Sorek Desalination Plant will provide up to 26,000 cubic meters—or nearly 7 million gallons—of potable water to Israelis every hour. When it’s at full capacity, it will be the largest desalination plant of its kind in the world.

“If we didn’t do this, we would be sitting at home complaining that we didn’t have water,” said Raphael Semiat, a member of the Israel Desalination Society and professor at Israel’s Technion-Israel Institute of Technology. “We won’t be dependent on what the rain brings us. This will give a chance for the aquifers to fill up.”

The new plant and several others along Israel’s coast are part of the country’s latest tactic in its decades-long quest to provide for the nation’s water needs. Advocates say desalination—the removal of salt from seawater—could be a game-changing solution to the challenges of Israel’s famously fickle rainfall. Instead of the sky, Israel’s thirst may be quenched by the Mediterranean’s nearly infinite, albeit salty, water supply.

Until the winter of 2011-’12, water shortages were a dire problem for Israel; the country had experienced seven straight years of drought beginning in 2004. The Sea of Galilee (also known as Lake Kinneret), a major freshwater source and barometer of sorts for Israel’s water supply, fell to dangerous lows. The situation got so severe that the government ran a series of commercials featuring celebrities, their faces cracking from dryness, begging Israelis not to waste any water.

Even as the Sea of Galilee has returned almost to full volume this year, Israeli planners are looking to desalination as a possible permanent solution to the problem of drought. Some even anticipate an event that was once unthinkable: a water surplus in Israel.

In Israel, desalination provides 300 million cubic meters of water per year—about 40 percent of the country’s total water needs. That number will jump to 450 million when Sorek opens, and will hit nearly 600 million as plants expand in 2014, providing up to 80 percent of Israel’s potable water.

Like Israel’s other plants, Sorek will work through a process called Seawater Reverse Osmosis that removes salt and waste from the Mediterranean’s water. A prefiltration cleansing process clears waste out of the flow before the water enters a series of smaller filters to remove virtually all the salt. After moving through another set of filters that remove boron, the water passes through a limestone filter that adds in minerals. Then, it enters Israel’s water pipes.

Semiat says desalination is a virtually harmless process that can help address the water needs prompted by the world’s growing population and rising standard of living.

“You take water from the deep sea, from a place that doesn’t bother anyone,” he said.

But desalination is not without its critics. Some environmentalists question whether the process is worth its monetary and environmental costs. One cubic meter of desalinated water takes just under 4 kWh to produce—that’s the equivalent of burning 40 100-watt light bulbs for one hour to produce the equivalent of five bathtubs full of water. Freshwater doesn’t have that cost.

Giora Shaham, a former long-term planner at Israel’s Water Authority and a critic of Israel’s current desalination policy, said that factories like Sorek could be a waste because if there is adequate rainfall the desalination plants will produce more water than Israel needs at a cost that is too high. Then, surplus water may be wasted, or international bodies like the United Nations could pressure Israel to distribute it for free to unfriendly neighboring countries, Shaham said.

“There was a long period of drought where there wasn’t a lot of rain, so everyone was in panic,” Shaham said. “Instead of cutting back until there is rain, they made decisions to produce too much.” 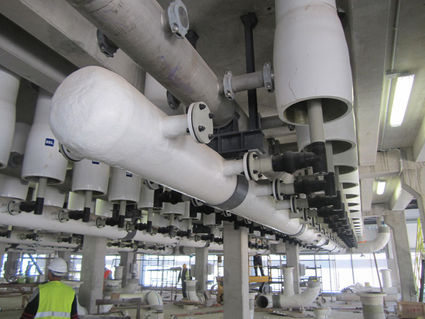 Rows of filters at the Sorek Desalination Plant in Israel remove salt from water flowing in from the Mediterranean Sea.

Fredi Lokiec, an executive vice president at the Sorek plant, says the risks are greater without major desalination efforts. Israel is perennially short on rainfall, and depending on freshwater could further deplete Israel’s rivers.

“We’ll always be in the shadow of the drought,” Lokiec said, but drawing from the Mediterranean is like taking “a drop from the ocean.”

Some see a water surplus as an opportunity. Orit Skutelsky, water division manager at the Society for the Protection of Nature in Israel, says desalinated water could free up freshwater to refill Israel’s northern streams and raise the level of the Sea of Galilee.

“There’s no way we couldn’t have done this,” she said of desalination. “It was the right move. Now we need to let water flow again to the streams.”