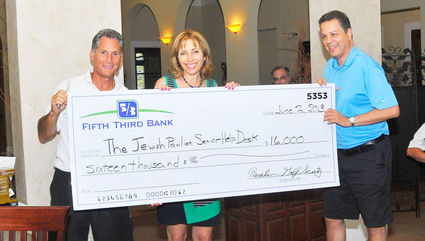 Ken Davis and Lloyd Green present Nancy Ludin, executive director of the Jewish Pavilion, with a check for $16,000.

Special to the Heritage

The Pavilion Golf Society shot a hole in one for the elder community with a successful inaugural golf outing June 2. More than 70 golfers were in full swing at Alaqua Country Club for a morning round of golf to raise funds for the Jewish Pavilion and its Senior Help Desk.

Sunday morning golfer and Pavilion member Hank Katzen noted, “Today’s all about spending time with family and friends, while raising money for a great cause.”

This sentiment was seconded by Aaron and Sam Gorovitz, 12, a father and son duo who were participating in their first golf tournament as a team. President of the Board of the Jewish Pavilion Carol Feuerman stated, “The Pavilion Golf Society got the ball rolling for a successful annual event. The money earned will help sustain our new senior help desk, ensuring the Orlando Jewish community access to information about elder care. We are so thankful to co-chairmen Lloyd Green and Ken Davis for hosting a perfect day of golf, down to the last tee.”

Lloyd Green of London has hosted a charity golf event to benefit seniors in the United Kingdom for the past 15 years. When Lloyd and wife, Claudia, took up residence in the Orlando area, raising funds for Jewish seniors was par for the course. Green notes, “I attended an event in London hosted by well-known philanthropist, Lord Levy. Levy suggested we look at ourselves and take note how lucky we are. Then he asked us how we could assist others. I became chairman of a golf society in the U.K., which raised money for the Jewish Care Society, an umbrella organization that looks after the infirm, both young and old, in the Jewish community. Over the next decade it became the biggest golf charity in the country thanks to tremendous community support. I hoped to replicate the efforts here in Central Florida.”

Last fall Green was golfing with friend and fellow Ohev Shalom congregant, Ken Davis, when he enquired about charitable events benefitting Jewish seniors. “I told Ken that I had experience running a golf charity in the U.K., and that I was interested in helping Jewish seniors,” Green said. “Ken asked me if I was familiar with the Jewish Pavilion. Ken shared that the Pavilion had provided Shabbat services and visitation for his late mother-in-law, Lillian Spiegel, while she was a resident at Chambrel Assisted Living Home in Longwood. Ken and his wife, Joy, were grateful for the personal care and attention Lillian had received, and suggested that the Pavilion would be a good cause. Thus, the Pavilion Golf Society was formed.”

On the morning of the golf event, the security guard at the gated Alaqua community in Longwood was in for a surprise as dozens of golfers lined up to gain entrance. Green served as golf captain at the Sunday morning tournament, patrolling the grounds at Alaqua Lakes Country Club in a golf cart, welcoming participants and supporters with a warm greeting. 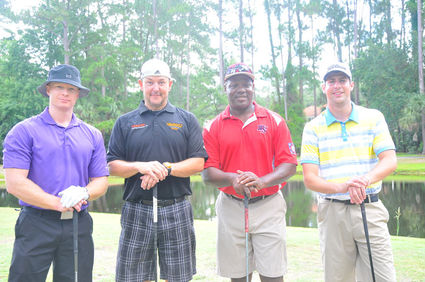 The team from Continuous Care won the golf tournament. They are, from left, Joe Norwood, Brent Brown, Rick Humphery and John Scamehorn.

Green and Davis, along with their committee, had spent months planning, and were thrilled with the crowd of Pavilion supporters and golf enthusiasts that descended upon Alaqua Lakes Country Club.

Green said, “For a first-time event I am thrilled we raised awareness and enthusiasm about the Jewish Pavilion and the Pavilion Golf Society Tournament, while creating an experience that involved the entire Jewish community. Thanks to our participants and our generous sponsors, Florida Hospital, Fifth Third Bank, and Vitas Hospice, we have raised $16,000 for the Pavilion’s Senior Help Desk.”

The tournament winners were:

Winner of the Porsche for the Weekend Raffle, Daniel Best.