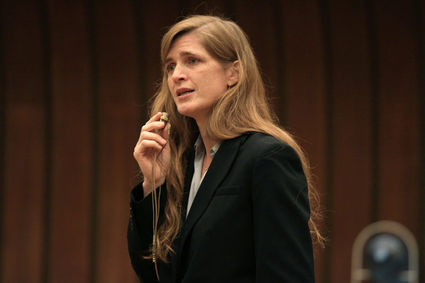 Samantha Power, the new U.S. Ambassador to the U.N.

Samantha Power, President Barack Obama’s replacement for Susan Rice as U.S. Ambassador to the United Nations, has a history of controversial comments about Israel, reigniting concerns regarding the Obama administration’s support for the Jewish state that were raised after the nomination of Secretary of Defense Chuck Hagel.

Morton Klein, national president of the Zionist Organization of America (ZOA), told JNS.org last Wednesday that a look at the list of Obama’s nominees and appointments to positions that impact Israel—including Secretary of Defense Chuck Hagel, Director of the Central Intelligence Agency John O. Brennan, and now Power—“makes very clear that President Obama is no friend of Israel, and that he is insensitive to the interests of American Jews and the pro-Israel community, because all of those important posts have been filled with people who have been very hostile to Israel.”

Power from January 2009 to March 2013 held positions including special assistant to the president, senior director for multilateral affairs and human rights on the National Security Council, and member of the Atrocities Prevention Board.

During a 2002 interview at the University of California, Berkeley Institute of International Studies, when asked what she would advise a U.S. president to do if either party in the Israeli-Palestinian conflict was “moving towards genocide,” Power referenced the pro-Israel lobby by saying the situation might mean America “alienating a domestic constituency of tremendous political and financial import,” before seemingly vouching for an American invasion of Israel to protect the Palestinians from genocide.

“It may mean more crucially sacrificing—or investing, I think, more than sacrificing—literally billions of dollars not in servicing Israelis’, you know, military, but actually in investing in the new state of Palestine, in investing billions of dollars it would probably take also to support, I think, what will have to be a mammoth protection force, not of the old, you know, Srebrenica kind or the Rwanda kind, but a meaningful military presence,” said Power, who later retracted her comments in an interview with Haaretz.

In a 2007 interview posted on the Harvard Kennedy School of Government’s website, Power said, “America’s important historic relationship with Israel has often led foreign policy decision-makers to defer reflexively to Israeli security assessments, and to replicate Israeli tactics, which, as the war in Lebanon last summer demonstrated, can turn out to be counter-productive.”

Power has also criticized the New York Times for reporting that there was no massacre of Palestinians in Jenin in 2002, commenting in the 2003 book Ethnic Violence and Justice, “I was struck by a headline that accompanied a news story on the publication of the Human Rights Watch report. The headline was, I believe: ‘Human Rights Reports Finds Massacre Did Not Occur in Jenin.’ The second paragraph said, ‘Oh, but lots of war crimes did.’ Why wouldn’t they make the [Israeli] war crimes the headline and the non-massacre the second paragraph?”

ZOA’s Klein told JNS.org that the appointment of Power is a troubling development for the prospects of Israel at the U.N., a body whose resolutions already frequently condemn the Jewish state. Klein added that Power’s firing from Obama’s 2008 election campaign over calling Hillary Clinton “a monster” indicates that Power lacks the diplomatic tact required for the U.N. ambassador role.

Klein said ZOA plans to scrutinize Power, publicly note her past statements about Israel, and speak with other Jewish groups about the issue—just like ZOA did when it felt Obama’s nomination of Hagel for defense secretary warranted opposition. The Republican Jewish Coalition (RJC), another group that was vocal in its opposition of the Hagel nomination, also issued a warning about the Power appointment on Wednesday.

“Samantha Power has a record of statements that are very troubling to Americans who support Israel,” RJC Executive Director Matt Brooks said in a statement. “We urge members of the U.S. Senate to question her closely about her past statements and writings.”

Sarah Stern, president of The Endowment for Middle East Truth, said in a statement, “Considering Power’s openly hostile positions on Israel as well as her deep seated resentment for the United States, and her biases in favor of the Palestinians despite their continued incitement to hate and to kill Israelis, our one true democratic ally in the region, and on the Iranian nuclear program, this appointment shows supporters of Israel that the Obama Administration’s worst instincts are coming to the fore in its second term. It’s deeply distressing. We oppose her nomination in the strongest terms possible.”

The Anti-Defamation League (ADL), however, praised the Power appointment, with Barry Curtiss-Lusher, ADL national chair, and Abraham Foxman, ADL national director, saying in a statement, “We are pleased that President Obama has nominated a true champion of human rights who led the effort to make averting genocide and atrocities a core part of American policy to head the U.S. delegation at the United Nations.”

“As head of President Obama’s multilateral affairs efforts, Samantha engaged in an all-hands-on-deck U.S. campaign against Palestinian unilateral efforts in the U.N. to circumvent peace negotiations. She experienced first-hand the hostility faced by Israel and the abuse of the U.N. bodies to promote anti-Israel bias. As someone who appreciates, to the core of her being, the meaning of international human rights mechanisms, Samantha is clear eyed and understands the injustice of their abuse to target Israel’s legitimacy,” Curtiss-Lusher and Foxman added.

The ADL leaders’ statement did not reference any of Power’s past controversial comments on Israel.

Rabbi Shmuley Boteach, a well-known author and TV host who last November was a Republican candidate for the House of Representatives in New Jersey, wrote in a 2011 op-ed recounting a conversation he had with Power that she “rejected utterly the notion she had any animus toward Israel.”

“She acknowledged that she had erred significantly in offering hypothetical comments that did not reflect how she felt,” Boteach wrote, regarding Power’s 2002 comments in Berkeley. “She said that opponents of President Obama had unfairly taken her disorganized comments further and characterized them as ‘invade Israel’ talk.”