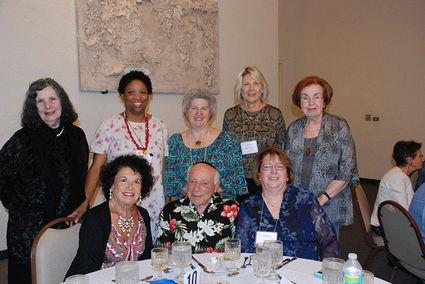 The Florida Region of Women’s League f or Conservative Judaism held its annual conference on May 19-21 in Sarasota. Temple Israel Sisterhood, which sent six women to the conference, received top awards. The theme this year was: “Sisterhood: Many Visions, One Goal.”

At the opening luncheon award certificates were presented to sisterhoods which had met the requirements for the Jewels in the Crown Awards, which honor those sisterhoods that nurture and sustain Jewish life and vitality in their local communities. Sisterhoods must meet the criteria of a wide range of activities—those developed and sponsored by Women’s League as well as home-grown programs and initiatives—to be acknowledged as the glittering jewels in the Women’s League crown. Nicki D’Amato, past president of Temple Israel Sisterhood, accepted the highest award, Emerald, for programming that occurred during her term of office.

Each conference also recognizes those sisterhoods that have reached milestones of continual affiliation with Women’s League, at five-year intervals. Temple Israel was recognized for 55 years of affiliation—the longest term at this year’s convention.