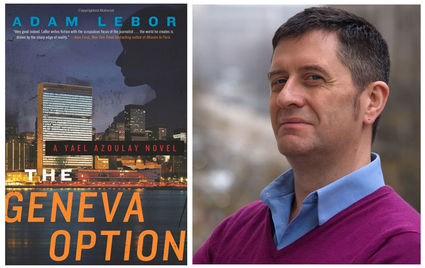 Adam LeBor in “The Geneva Option,” his second venture into fiction, introduces Yael Azoulay, an Israeli army veteran who is caught up in the world of international intrigue.

BUDAPEST (JTA)—There’s a new Jewish heroine on the block, a tough but tender Israeli who does undercover work for the United Nations and stars in a new series of thrillers by the British author and journalist Adam LeBor.

The first installment, “The Geneva Option,” was released in the United Kingdom in April and recently hit U.S. booksellers. It spins a tale of corporate greed, international corruption and insidious plans for mass murder, with intrigue spanning the globe from New York to central Africa to Switzerland.

The protagonist is Yael Azoulay, an auburn-haired Israeli army veteran forced to use subterfuge, computer savvy and Krav Maga skills to thwart the villains.

“As far as I know, she’s the first Israeli woman protagonist in a thriller,” said LeBor, a Budapest-based correspondent for the Times of London, the Economist and other publications.

The story pivots on an unholy alliance between superpowers and multinational corporations aimed at cornering the market on raw materials essential for 21st century technology.

“I wanted to look at the tension between the moral aims of the U.N. and the actual results of superpower politics in the U.N.—there’s a pretty serious gap there,” said LeBor, who drew on his own dealings with the world body as a reporter in Bosnia during the 1990s.

“But I don’t see the book as an indictment of the U.N. or of the people who work there,” he added. “There are obviously a lot of good people in the U.N. committed to its values. At the same time there are some really dreadful people there, just placed there by their governments, or careerists out to milk the machine for as much as they can.”

LeBor drew inspiration for Azoulay from many sources, including Lisbeth Salander, the hacker heroine of Stieg Larsson’s “Millennium” trilogy, and Azoulay’s biblical namesake, Yael, who sheltered an enemy commander in her tent and then killed him by hammering a stake into his head.

“What if there was someone working for the U.N. with a powerful moral drive to do good, yet who was forced to operate in the shadows? Even to kill?” LeBor wrote in a recent Op-Ed in the Times of Israel.

Azoulay, he wrote, is “a modern woman—a 21st century heroine, haunted by her past, with a complex identity, but one firmly rooted in Israel.”

Azoulay faces more than just physical enemies. In her mid-30s, she’s also contending with the biological clock. To complicate matters, the potential love interest for this proud Israeli is a Palestinian-American journalist.

“There’s always tension between career women and the call of relationships and family,” LeBor told JTA. “The basis of drama is conflict, and you need inner conflict in the protagonist.”

“The Geneva Option” is Lebor’s second venture into fiction, having already authored more than a half-dozen non-fiction books. His latest, “Tower of Basel,” is an investigative history of the Switzerland-based Bank for International Settlements that also was recently published in the United States.

Many of his books have a Jewish or Israeli theme—including “The Believers,” about the swindler Bernard Madoff’s impact on the American Jewish community, and “City of Oranges,” the story of Israel told through the sagas of three Arab and three Jewish families in Jaffa.

“I guess it’s a way of exploring part of my own identity in a way, being brought up Jewish in England, having gone to two Jewish schools, having lived on a kibbutz in my gap year, having studied Hebrew and also Arabic,” he said. “I realized when I got to the level of being able to write non-fiction books, I thought that there were some interesting things I can explore here.”

“When you get fiction going, it’s true what you read about—the characters just come alive,” he said. “You wake up in the morning still half asleep and you know what to do. You end a chapter on a cliff-hanger. You think how on earth is she going to get out of that; you sleep on it. And you know what to do. It’s really an amazing high. It’s like flying when it works.”

As for Yael Azoulay, her next full-length book adventure will be set partly in Vienna. Until then, LeBor and his publisher will be taking advantage of new technology to issue occasional short stories or novellas that can be published as e-books within weeks of being written. The first, “The Istanbul Exchange,” came out last month.

Azoulay “is going to get into a lot more trouble, for sure,” he said.

And, LeBor said, he plans little by little to reveal more about her past.

“It’s not spelled out in ‘The Geneva Option’ if [Azoulay] has any connections with Mossad, and if so, what they might be,” he added. “So you have to wait to see that in later volumes.”