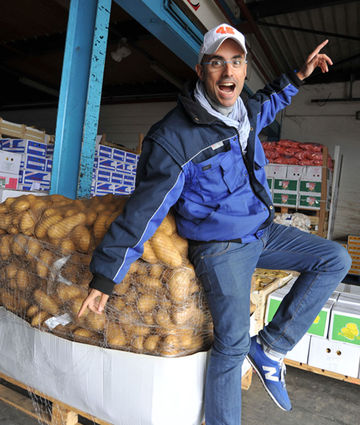 Marc Fichel at his stall May 29 at the Rungis wholesale market in Paris.

PARIS (JTA)—Using two iPhones, Marc Fischel was overseeing the shipping of tons of vegetables two weeks ago at the hectic Rungis wholesale market, where thousands of Frenchmen ship mountains of fresh perishables across Europe.

The director of export at one of the market stalls, 40-year-old Fichel fits in easily with the multitudes of Asians, Arabs and Africans who work at Rungis. It’s easy to forget the French Jew is an up-and-comer on the country’s indie pop scene, with a debut album recently released and some 20 sold-out concerts to his credit.

“I think part of the fascination with me owes to my double life: my musical career and my job at the market,” Fichel told JTA.

“It was a huge, huge compliment,” Fichel said.

Yet beyond Fichel’s musical talent, his story also is seen as an example of how working-class Muslims and Jews can get along in a city where tensions between the groups often run high. His musical partners comprise a multicultural vichyssoise that includes guitarist Zizou Sadki, the son of a Muslim Moroccan immigrant, and Nourith, an Israeli army veteran who performs at Jewish community events.

Despite the apparent contrast between his celebrity status and day job moving vegetables, Fichel says the two professions have one thing in common: the irrelevance of politics and religion.

“Here there’s no religion and no race, only business,” Fichel said. “And with music there is only harmony.”

One of Fichel’s most successful songs, “My Life in the Market,” is about his work at Rungis, which also serves as backdrop for the video and features Fichel’s market colleagues. The clip has received more than 1 million views on YouTube.

Fichel is a natural schmoozer, with a warm smile and a knack for sound bites. During an interview at the market restaurant, he leaps up repeatedly to hug, kiss or horse around with passing co-workers. His father, a dentist, taught him to play the piano, and it was his friends that persuaded him to pursue a musical career.

“I always played for and with friends until they kind of forced me a few years ago to make a video and put it online,” Fichel said.

The video was for “The Blackberry Blues,” a love song for his cellphone. Produced on a shoestring budget, it drew the attention of Daniele Molko, now Fichel’s manager, and earned a half-million views online.

Fichel may get along well with Paris’ diverse communities, but he also calls himself “a proud Jew” and a Zionist. Earlier this month, he gave his first major international concert in Tel Aviv, an experience he calls “the proudest moment of my life.”

“You are from my family,” Fichel said in Hebrew to a crowd of approximately 500 who filled Tel Aviv’s Tzavta concert hall to capacity on May 20.

Performing in Israel “was a very special moment, an amazing spiritual experience,” Fichel said. “Israel is not just another place for me. I’m not religious, but it’s where my roots lie.”

He also said his pro-Israel attitudes are not an issue at Rungis, where many of the workers and clients are Arab.

“Politics is politics, business is business and music is music,” he told the Israeli daily Maariv. “I have many Muslim friends here and they introduce me to artists who sing in Arabic, so we can perform together.”

Far from being embarrassed when market friends taunt him for giving interviews on his lunch break, Fichel asks Francois, the owner of the L’Etoile restaurant, to play “My Life in the Market” on the stereo. But leading a dual life is taking its toll on Fichel, who says he has been working 19-hour days since his musical career began to take off.

Yet Fichel, a bachelor who says he “loves women too much to get married,” does not want to leave his day job, which he has held for 10 years.

“You don’t get up every day at 3 a.m. for this unless you’re passionate about it,” he said.

Fichel says the fast pace and time-is-money directness at Rungis fulfills a need that kept him “looking for excitement and getting into trouble” during his sheltered childhood in suburban Paris. But Gerard, a friend from the market, says he understands if Fichel leaves to focus on his music.

“He’s one of us ‘cause he never thinks he’s better than anyone,” Gerard said. “I just hope he remembers our names when he’s real famous.”